“The Hero of All Terrain”, as described by Nissan on what is rightfully the halo SUV of their lineup does indeed deserve this title. For 2018 the Nissan Patrol V8 LE Platinum receives very little updates. Its tried and tested drive train and independent suspension makes it feel at home on and off road. Don’t take my word for it, just look out and you will see how many Patrols are out on UAE’s road. Its numbers don’t lie and at a time where customers are shying away from buying new cars, the sales of Patrol’s has been as steady as its torque curve. 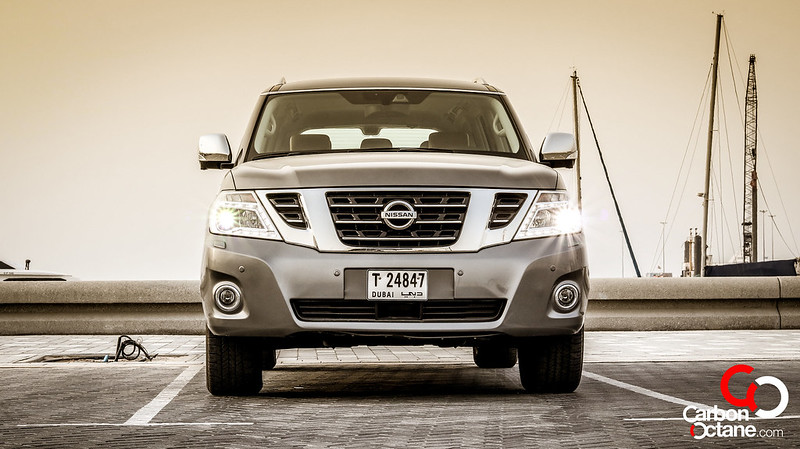 Why change a formula when it works so well. There is no need for it. The Patrol V8, also knows as Y62, came out in 2010, making it 8 years old. Since the launch, the Patrol has received minor upgrades, mostly in its trim, while the engine and its drive train remained the same. And it’s still relevant today, which is quite astounding, how far thinking the developers of the Patrol had been. 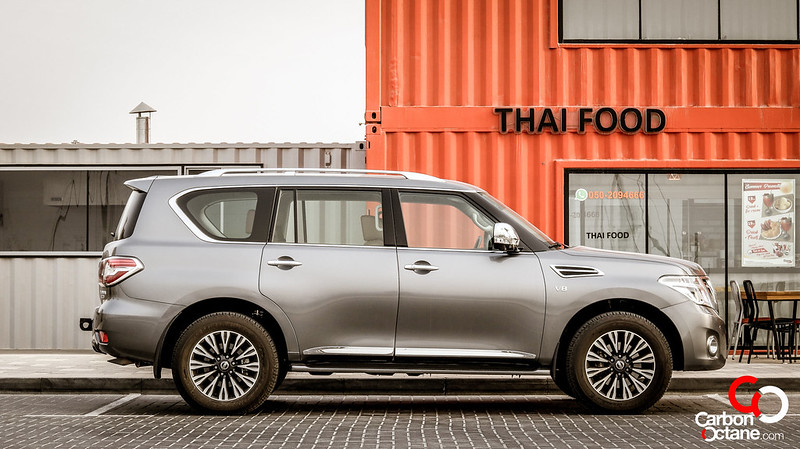 What you see in the pics is the Nissan Patrol 5.6L V8 LE Platinum City. The last word actually differentiates the front bumper, which is lower to the ground than other models and gives the Patrol a more dynamic stance. The downside is that the approach angle is slightly compromised for serious off-roading. 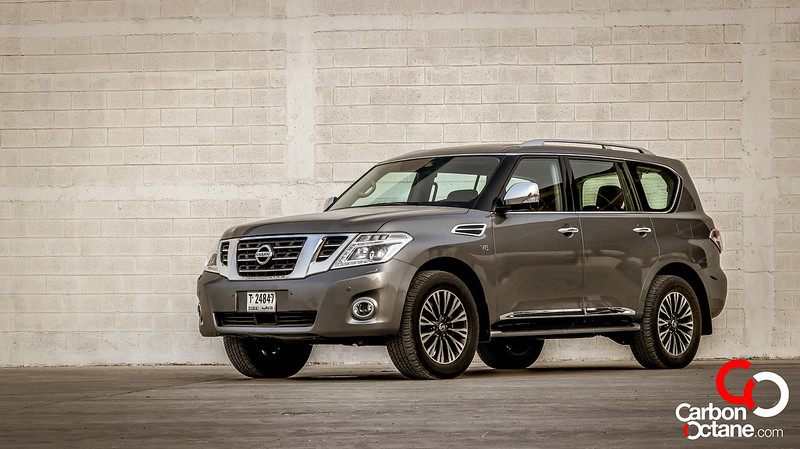 The interior of the Patrol is covered with leather and soft touch surfaces. Wooden panels lines the interior panel décor of the center console and as expected the center armrest open to a cooler. This armrest opens both ways as the 2nd row passenger can open the armrest from a button on the rear side (facing them) of the armrest. Now these features were there since the last 8 years but small ergonomics such as these are what makes everyday living with the Patrol that much better. 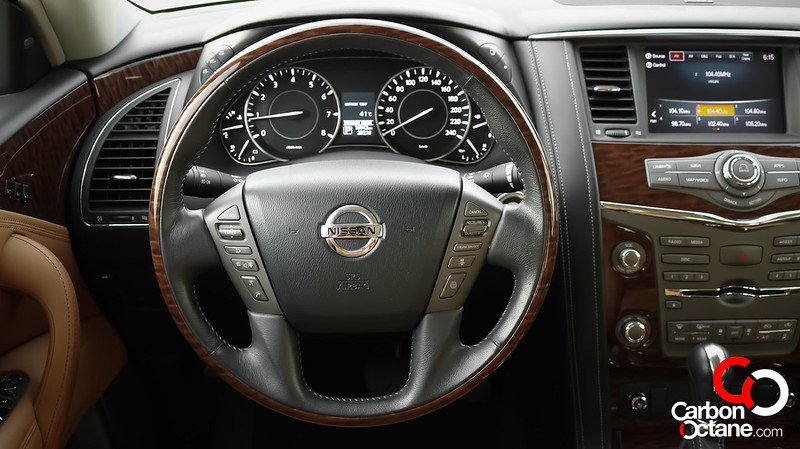 The 8 inch touch screen includes navigation and displays a birds eye view of the car when the gear is placed into “Reverse”. The two new interior features we got, at least for the trim we drove was blind spot monitor and a rear camera projector integrated with the rear view mirror which increases the rear field of vision and offers great resolution even at night, something one would appreciate while reversing this SUV. 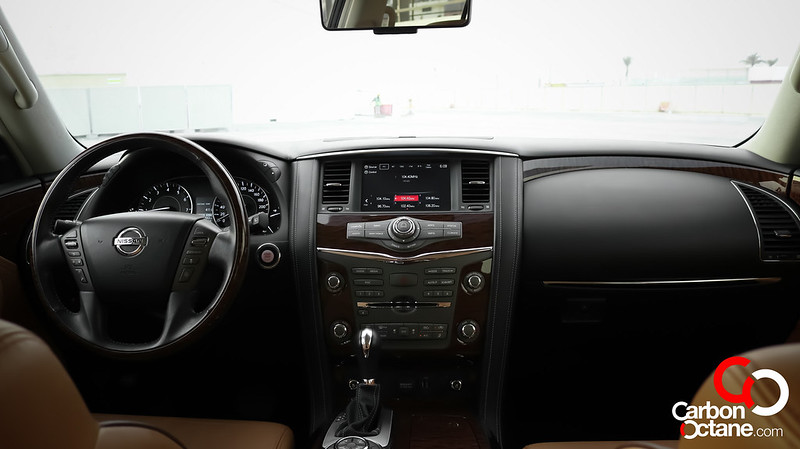 The Patrol was one of the first Japanese full sized SUV’s that came with a remote starter, which as you can tell, is a boon in the summer. This coupled with Nissan’s much-appreciated strong A/C and the Patrol’s tri zone Auto A/C system is sure to make every ride with your loved ones as comfortable as possible despite the blistering heat wave on the outside. Finally we are left with the 5.6 liter V8 which is coupled to a 7 speed automatic gearbox. This gearbox can be manually shifted via the gear shifter and comes in handy during off-roading in the desert where you need to hold on to the gears. We felt that shifting via the gear lever is more natural and comfortable that some SUV’s which offers paddle shifters and others with a rather gimmicky +/-buttons. 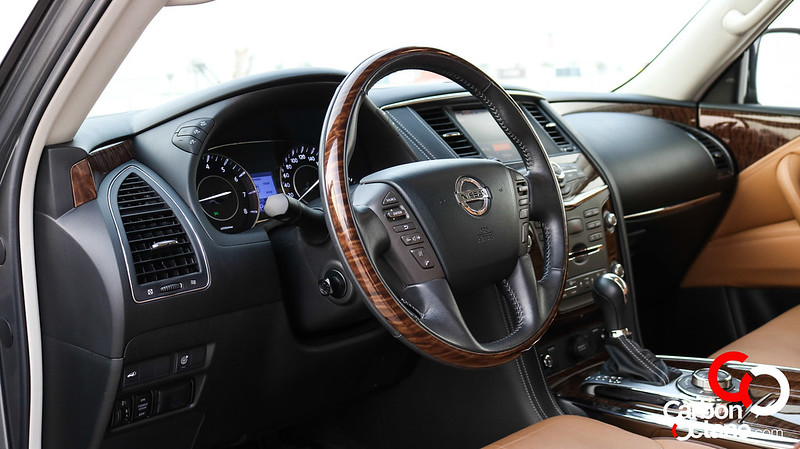 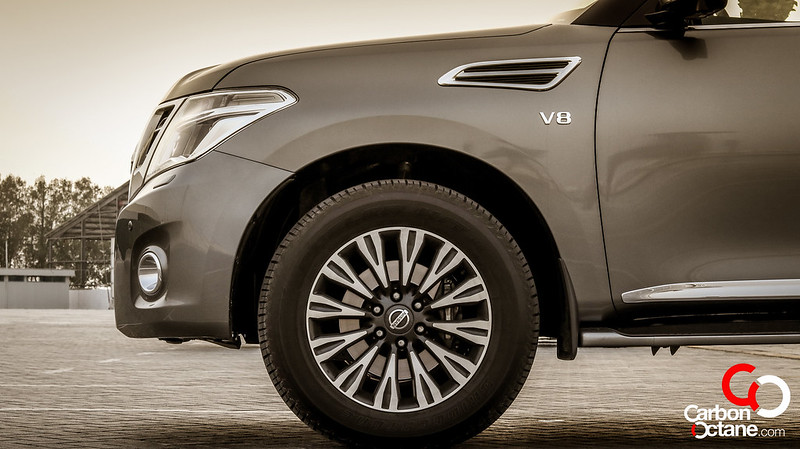 560 Nm of torque is more than enough for this large SUV, it builds up linearly as you would expect from a naturally aspirated engine and this gives the magical essence of why people love the Patrol. There are many factors why we all love this aging machine. It’s not complicated and the size, though it’s very large, but somehow is manageable to maneuver in all the underground parking lots and the dreaded mall parking lots as well.

The now standard terrain management rotary dial includes setting for sand, rock, snow and road. Hill descent control is standard as well as the ability to switch from 4 high to 4 low as well as locking the rear differential. It’s been out for so long that once you are ready to drive the control seems natural to set. You have noticed that, in some cars, you need some time to orient yourself and find the buttons, which tends to hide behind the steering wheel. It’s not a game changer but this is not the case with the Patrol. The buttons are there where it should be and the moment you enter the Patrol, though it might be for the first time you would feel that it’s an old acquaintance. 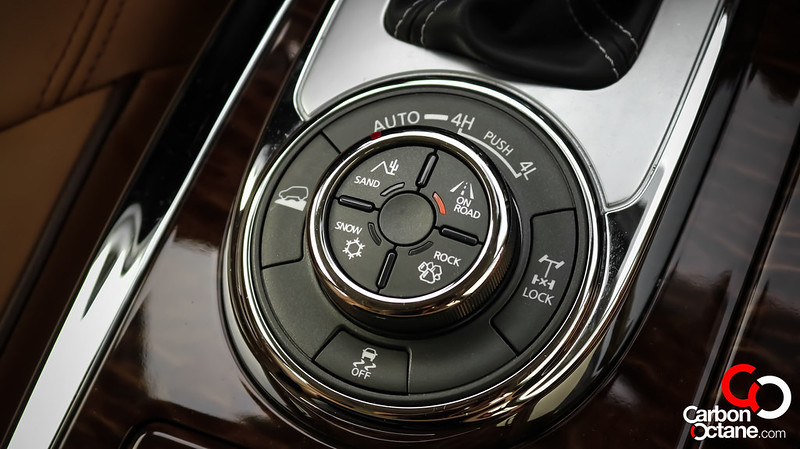 You must be wondering why we are still reviewing this dinosaur. Well, it’s as relevant now as it was 8 years ago and is still one of the first two choices when it comes to large SUV’s segments in this region. This says a lot about the respect it garners from the people of this region, it’s as staple as biriyani but one that promises to keep you entertained past the honeymoon period. 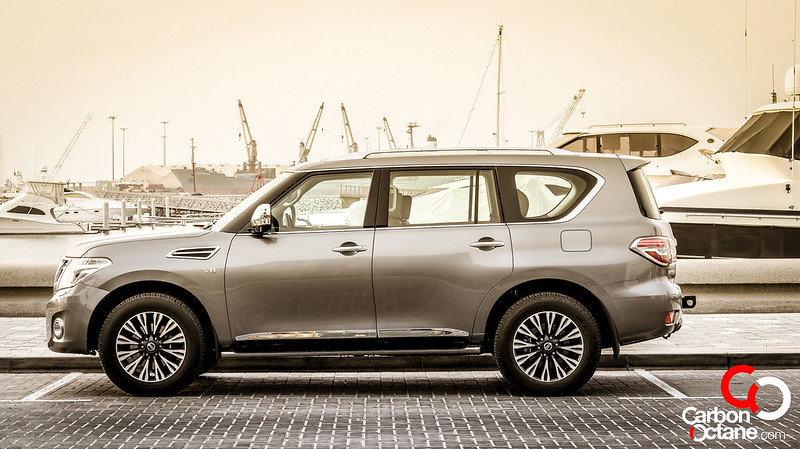