HomeReviewsFirst Drive of the All New 2019 Audi A8 in Dubai

The 4th generation A8 has finally arrived to ruffle the feathers of Mercedes’s S-Class and BMW’s 7 Series. It packs safety technologies like no other, and the interior instrumentation would give the Starship Enterprise a run for its money. Initially available in the GCC with a turbocharged V6 which produces 335 Hp and 500 Nm of torque, the 2019 Audi A8 and its lightweight aluminum architecture is light and nimble enough to pace with the best and be frugal with its dietary plan. 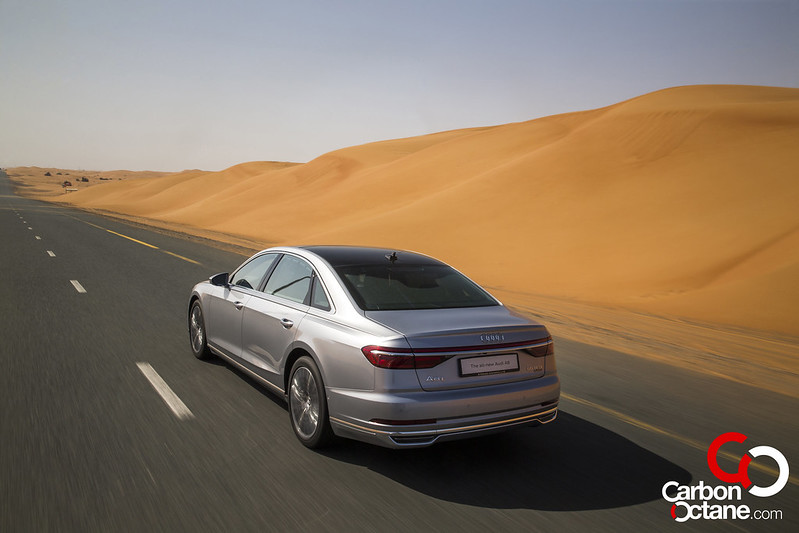 The video is a small sample of what the 2019 Audi A8 is capable. Our half-day tryst with it barely enabled us to scratch the surface of this Teutonic sedan. But what we found was amazing, the tech was amazing, anything that you could touch and sense was amazing and the ride quality, dare I say matches that of the S-Class. Yes, the Audi A8 is a peek into the future of automobiles. From ground breaking “center airbags” to OLED taillights and HD Matrix LED headlights and the lack of physical buttons and the fact that Autonomous driving is available in Level 3 format (which we did not experience because of time limitations), the A8 is now the technological marker for all other manufacturers to follow. 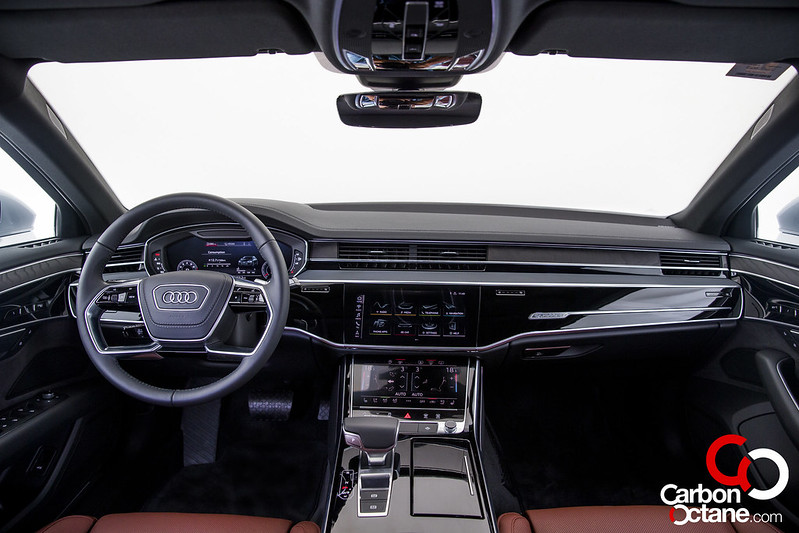 The A8 is wider and lower than the S-Class giving it a more shall we say poise with purpose. With a starting price of AED 357,000; the Audi A8 is decidedly earmarked for the wealthy and would add to their arsenal of finely crafted vehicles. It is superbly comfortable and better poised than previous A8’s which is a feat in itself.  At launch, the A8 would initially be available with a V6 while the V8 would be coming towards the end of the year, all A8’s lays down power via an 8 speed gearbox which seems to read your mind when it comes to choosing which gear it needs to be on. There’s no constant need for hunting gears as you would expect from other 8 speed gearboxes. 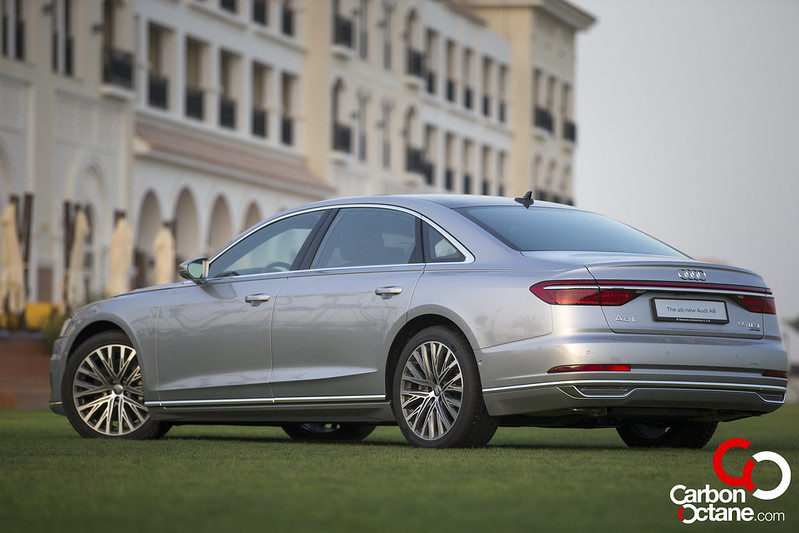 We had followed a convoy down the Hatta Oman highway and though the road was empty we kept a gentleman’s pace and within the speed limits at all times. However, the ride comfort was immediately noticeable. The Air Suspension smoothened out any unevenness and made for a silky smooth ride, reminiscence of Lexus’s LS400’s from the early 90’s. Now that’s a good thing. I thought that the S-Class had the best ride of them all but the all new A8 does match that feel, or to be precise the lack of it. It’s all about gliding in the A8, somehow the roads in the UAE, even if you were to drive to RAK seems to have improved all of a sudden. 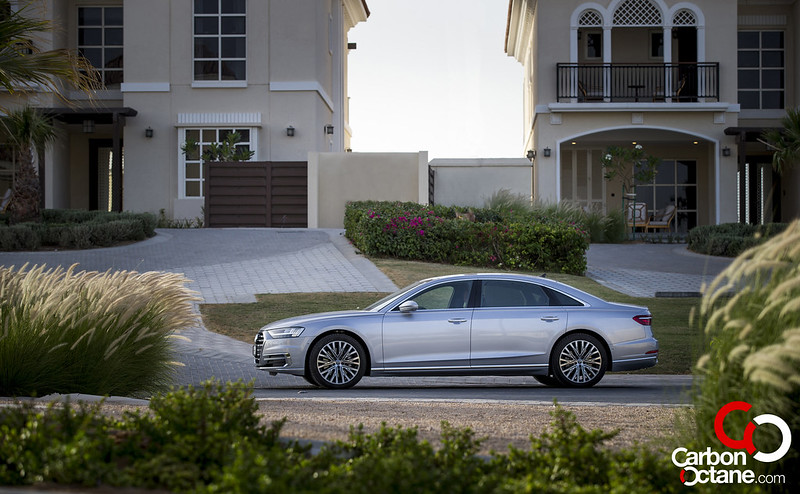 The sound isolation is another aspect that you would notice immediately as soon as the doors are closed. It’s pin drop silence. When you are in the new A8 you are totally obscured from all the distractions from the outside world. The new A8 is also best enjoyed from the passenger’s seat. You get your own center touchscreen pad that controls everything including the color of the LED accent light to suit your mood. 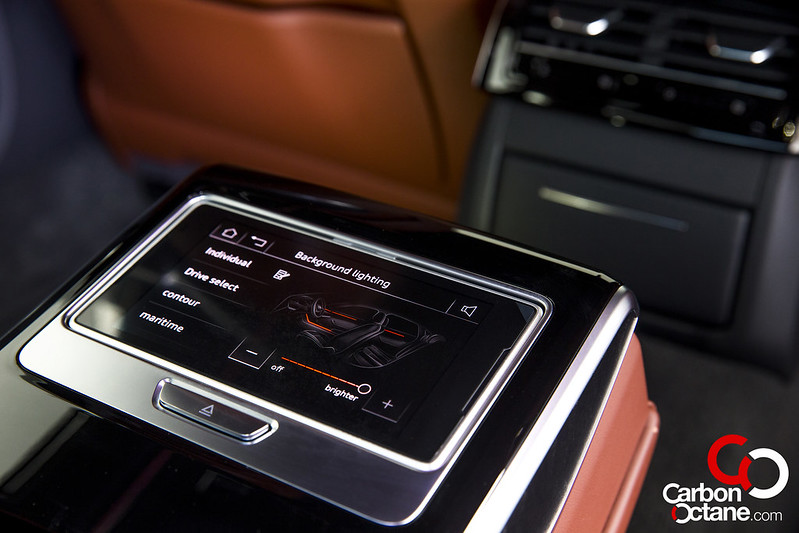 Audi has spent a lot of time trimming the fat off the A8 which was light anyways to start with. Now, it’s 58% aluminum, the most for any production vehicle. But it’s not all about lightweight, the Audi has built in safety systems that are over and beyond what is available. It anticipates an accident and raise the car so the impact occurs where it is the strongest and safest for the passengers, it’s these self-sacrifices that makes the new A8 special. Special not because it is just another safe vehicle, no, it’s more about that personal care and other systems which basically works in the background and in the shadows. Much like the US President’s Secret Service, the tech in the new A8 has a protective arm around its passengers at all times.

The interior gets probably the most significant changes. The center instrument panel is dominated by a 10.1 inch touchscreen with haptic feedback and blends in with the high gloss black panel that surrounds it. It does not feel like a separate entity and carries off a virtual seamless integration. The HVAC controls, basically any controls which changes the audio, air conditioning, memory seats are all haptic touch pads which are cool but does attract a lot of finger-print marks. But most important of all is the fact that all these button, or the lack of it, are all obscured and does not clutter the interior anymore. Much like the safety systems, the new Audi A8 provides a master-stroke of features without the clutter. 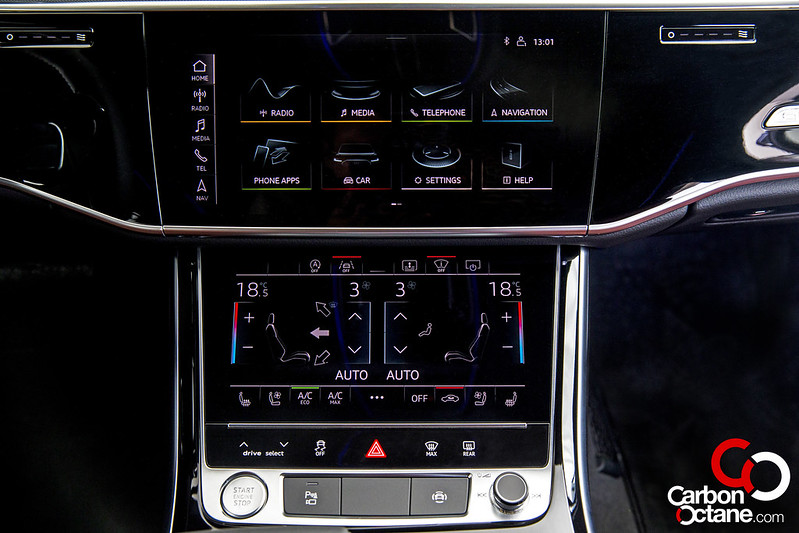 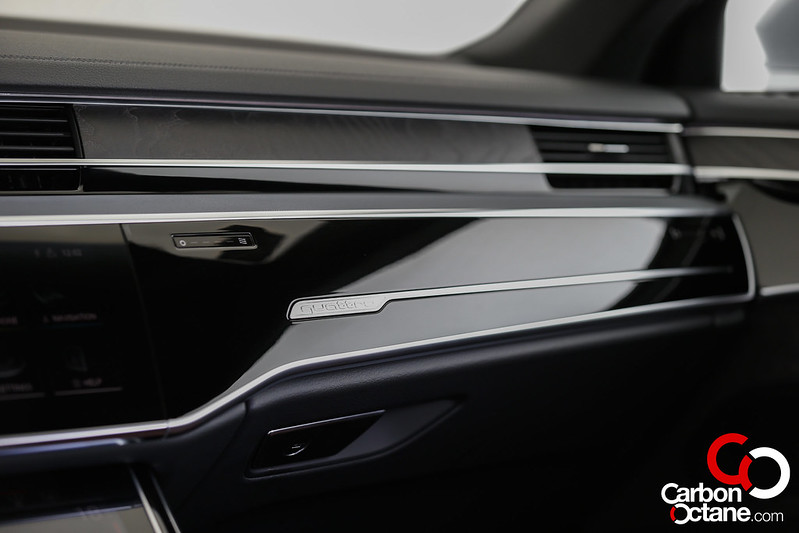 Amongst the visual treat would have to be the new Matrix LED front headlights which, unfortunately, we were not able to experience as we had a morning drive. But Audi, has pioneered the lighting system and the new A8 is a marker of headlights for other manufacturers to follow. We shall have more time with the A8 in the near future and would get to understand it more. But for now, the A8 seems to be the new kid on the block with hidden goodies just waiting to be unraveled. 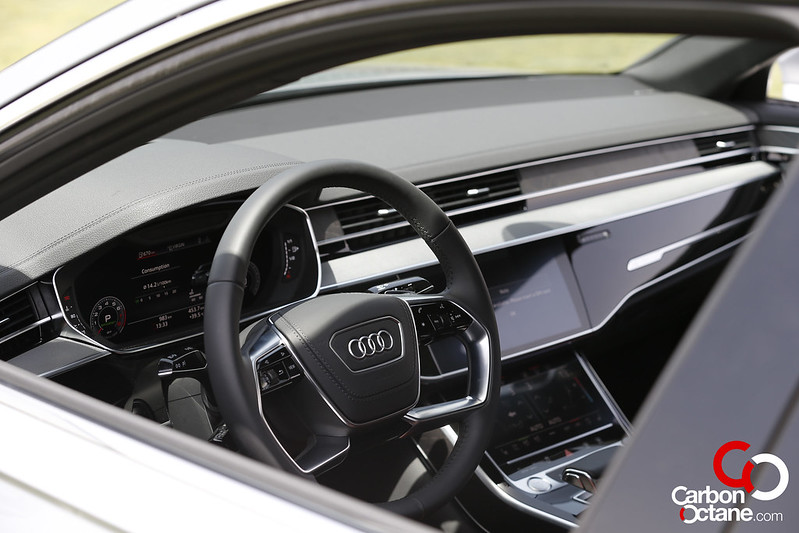 Price and Specs: First Drive of the All New 2019 Audi A8 in Dubai