Honda Middle East people launched their iconic touring motorbike, the “Goldwing”. The 6th generation of the iconic tourer is a favorite in the region and when the weather cools down, you tend to see the Goldwings start unfolding its wings. 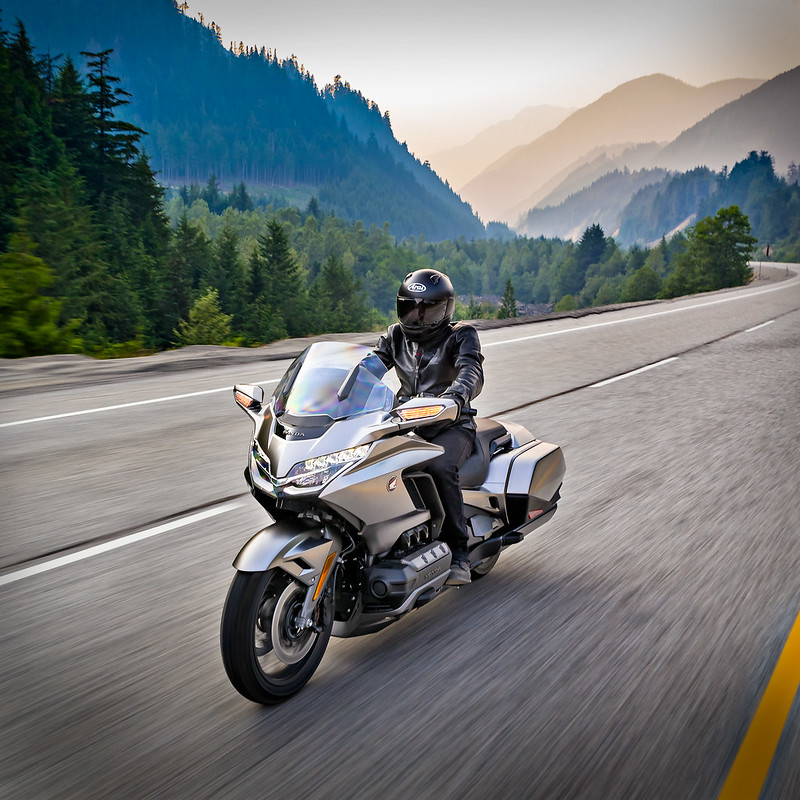 The Honda Gold Wing, since its introduction as a naked 1000cc machine in 1975 has always been the ultimate in two-wheeled travel. It is a motorcycle that has been very much on its own journey, growing in physical size and displacement over the decades, all the while creating an enduring and unrivaled reputation for luxury, quality and comfort. It has amassed a huge fan base here in the GCC and numbers grow each year, with the riders wanting to be part of the Gold Wing heritage. Now, in response to the evolutions of demographics and the motorcycle market, the development team in charge of the bike’s future have decided on a radical departure from what would be a traditional update trajectory. 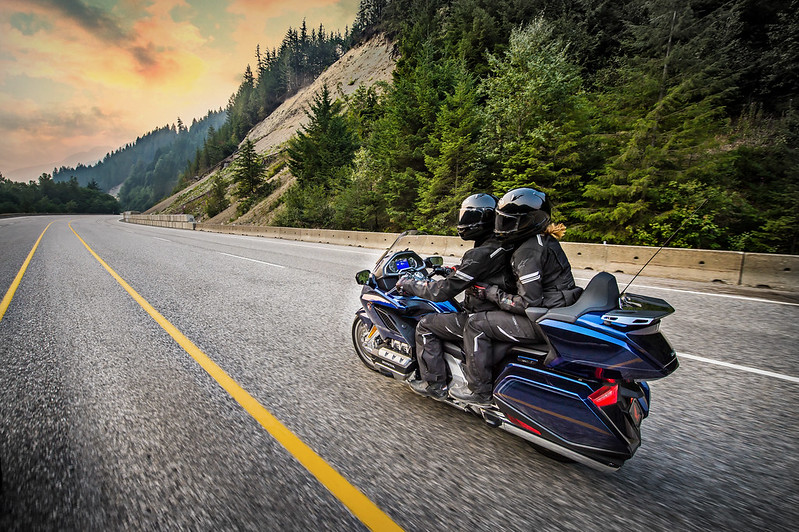 So for 2018 the GL1800 Gold Wing takes a new direction and is brand new from the wheels-up. It still has an evocative, flat six-cylinder engine that delivers an avalanche of torque and power, and it still remains Honda’s flagship premium tourer, loaded with features that allow two people to ride in style. Yet it’s smaller, much lighter and much more agile – very much a true ‘rider’s motorcycle’. 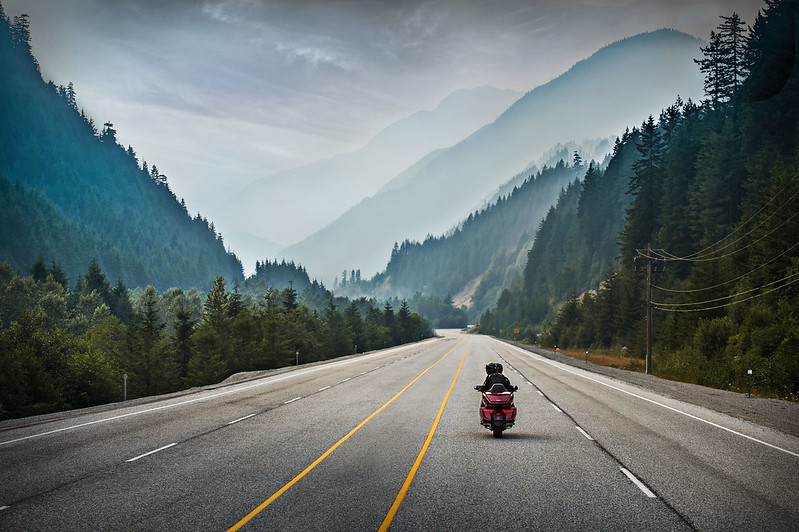 And as a result the new Gold Wing’s appeal is broader, reaching out to a younger generation of motorcyclists that may have overlooked – or simply not been aware of – the previous design. As happy on an urban commute as it is the open road, the Gold Wing is now a bike for all reasons, rather than just one.

“We wanted our new Gold Wing to maintain its luxury but to be a much more ‘rounded’ motorcycle. A machine as useful to its owner around the city as it is out on tour. And more exciting to ride than ever. So we started from a blank piece of paper and made the Gold Wing smaller and lighter, and added all the technological hardware and software the modern rider could wish for. Now, just as in 1975, it remains a flagship model for Honda – and we are very proud to start this new chapter for such an important name.”

Sharing a common engine and chassis platform, the new ‘Wing will be available as the base model GL1800 Gold Wing, and as a ‘Tour’ edition with top box, which will also offer a version equipped with DCT and air bag. Depending on the variant, up to 48kg has been saved compared to the previous model. 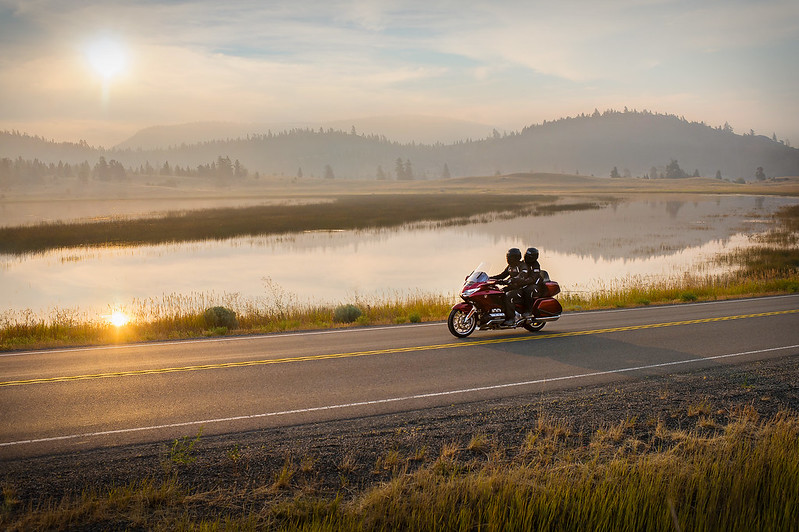 Optimized for size, the new flat six-cylinder engine has lost none of its power, torque and addictive delivery. Throttle By Wire has been added, with 4 rider modes; TOUR, SPORT, ECON and RAIN. Honda Selectable Torque Control (HSTC) maintains rear wheel traction while the suspension damping and Combined Brake System (CBS) alter depending on mode selected. Hill Start Assist (HSA) and Idling Stop add ease of use and improve fuel efficiency. 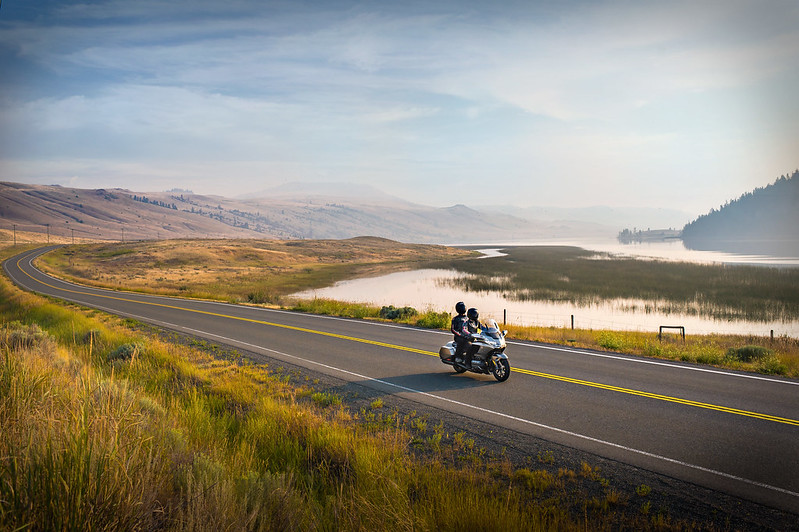 The manual transmission is now 6-speed, while the new Dual Clutch Transmission (DCT) features 7-speeds, with clutch feel, shift speed and rpm range of up/downshifts tailored specifically to each riding mode. It also features a creep forward and back function. The manual machine employs the same reverse system as the previous design. 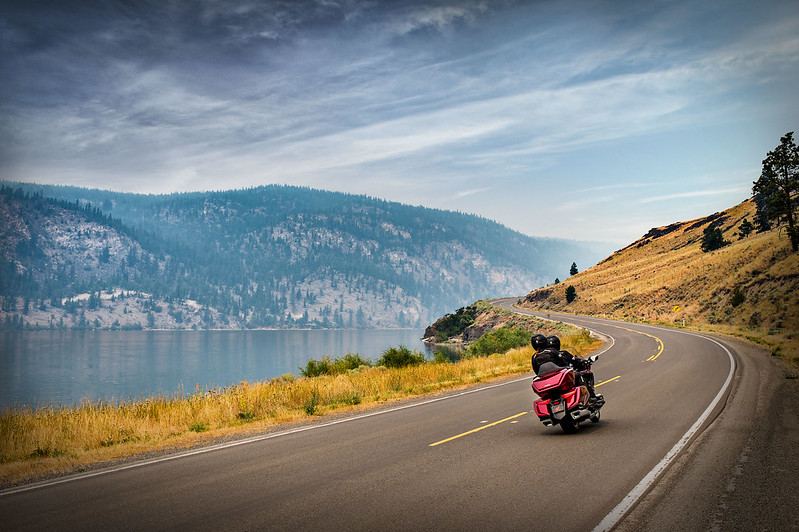 The performance improvement is matched by even greater levels of relaxation: the stylish, aerodynamically-efficient fairing channels air around the rider and the electric screen adjusts for preference; the seats provide all-day comfort. New features like the smart key system, Apple CarPlay and Bluetooth connectivity bring even more convenience. Styling & Equipment The previous Gold Wing featured an expansive design and attitude. The new Gold Wing is a completely different proposition and replaces the relaxed lines of the outgoing model with a more honed, athletic ethos. Key words the Honda team used during development were ‘Refined Shape, Taut Styling’. Also on display is the motorcycle itself – the double wishbone front suspension, flat six-cylinder engine, exhausts – in all their functional beauty. Drawn together the design elements create cutting edge style, underpinned by incredible levels of engineering and electronics 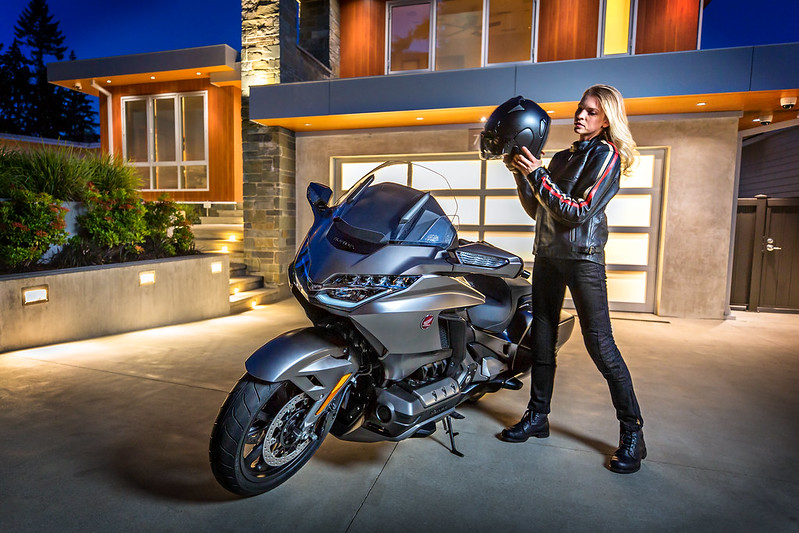 Screen angle and height adjustment is step-less. Available as options are a larger screen, a fully-adjustable deflector for the arms and upper body and fixed deflectors for the lower legs and feet.

All lighting is LED. The lower portion of the headlights use 5 polished optical lenses on both sides to create a Jewel-Eye low beam light signature. Using high beam (in the upper portion) creates a stereoscopic impression. The front indicators are housed in the mirrors and the indicators also auto-cancel; the system compares front and rear wheel speed difference and calculates when to cancel the indication relative to the riding situation.

The rear top box of the ‘Tour’ versions will hold 2 full-face helmets; combined with the panniers 110L storage capacity is available. Opening is via a button or smart key. Available as options are a luggage rack for the top box and exclusively designed inner bags.

Capacity of the fuel tank is 4 litres less at 21 litres. But as the new Gold Wing is so much lighter and more aerodynamic, improved fuel economy of 5.6 litres/100km means tank range is similar to the previous design.

Luxurious instrumentation creates a unique cockpit. Different low-contrast colours with dark tones are applied to the dials, of which the peripheral areas form cone-shaped slopes to create a feeling of depth. A ring with a metal texture surrounds each dial, and the graduations glow in LED, giving concrete depth and a calm, cool image.

The 7-inch full-color TFT liquid crystal display screen provides infotainment-related information (for the audio systems) as well as managing the HSTC and suspension adjustment. Information is displayed in differentiated segments in a very functional order, so the rider can get all the relevant data with the minimum of eye movement.

Operation of the luggage is simplified. With the smart key present a push button opens the panniers and top box. It is also possible to temporarily unlock the luggage via remote control; the unlock button on the smart key enables the passenger to instantly access the saddlebags and the rear luggage box. Hydraulic dampers smooth the opening and closing. Pushing and holding the call button results in the indicators flashing.

The Gold Wing is now compatible with Apple CarPlay, so the rider can utilise the personalised information and content inside their iPhone, such as telephone numbers and music playlists. Bluetooth connectivity has been adopted and a USB cable can also be plugged in.

The new Gold Wing’s die-cast aluminium twin beam frame is designed to package the (now much more compact) engine in a tighter space, 40mm further forward. Its structural thickness has been optimised in each area to deliver a smooth and stable ride, from walking speed upwards, whether on tight city streets or out on the open road. The frame and swingarm together are 2kg lighter than the previous design.

Rear spring preload is also now electrically adjusted. It’s an intuitive – rather than numerical – system. Separate from the 4 riding modes, there are 4 settings of preload relative to load from soft to hard: single rider; rider with luggage; rider with pillion, and rider with pillion fully loaded with luggage. The setting is displayed on the TFT screen and adjusted via switch.

Core to the previous Gold Wing’s appeal was its turbine-smooth flat six-cylinder engine, which produced torque from low rpm with a distinctive power delivery and feel that quickly became addictive.

To realise the handling ambitions of the new chassis the 1,833cc engine too has been redrawn. Still as a horizontally-opposed flat six, but now with four valves per cylinder rather than two, much more compact in size and 6.2kg lighter.

Peak power of 93kW arrives @ 5,500rpm, with peak torque of 170Nm delivered @ 4,500rpm. The bore size of 73mm (from 74mm) has been optimised to stroke of 73mm and bore pitch shortened 9mm; the left and right cylinders are offset 4mm and the cylinder sleeves are now aluminium. Compression ratio is set at 10.5:1.

TOUR mode is the base setting for comfort and power. It gives a direct 100% opening ratio between throttle grip and throttle body butterfly, with ‘default’ damping and front/rear brake force distribution.

To complement the engine’s deep bass signature the exhausts now emit a powerful throb, without excessive noise. The cross-sectional areas of the exhaust pipes have been reduced 20% for two out of the six cylinders, bringing about the change in sound volume and depth.

Key characteristics of the Idling Stop system are the ultra-quiet start-up of the engine thanks to the use of ISG, and the smooth starting feeling achieved through a combination of DCT and TBW control. When stopping at a traffic light with the Idling

Stop system on, the engine automatically stops after 3 seconds and, when restarting, the rider only needs to turn the throttle, which immediately starts the engine.

Hill starts on a conventional motorcycle often involve simultaneously releasing the brakes, opening the throttle and engaging the clutch according to the grade of the slope. To ease this effort, the new manual transmission Gold Wing has adopted Hill Start Assist (HSA).

The new 6-speed manual gearbox lowers the engine speed when cruising at 100km/h, compared to the previous 5-speed design. It’s also fitted with a ‘cam damper’ between the clutch and transmission, separating each inertial mass, reducing noise and improving shift quality/durability.

Honda’s unique Dual Clutch Transmission is a natural fit for the new Gold Wing engine and development revolved around DCT as the base. This is the third all-new generation of the system and the first to have 7-speeds, specifically designed for long-distance cruising; it’s also extremely smooth and fast shifting. And lighter than the 5-speed manual transmission fitted to the previous design.

The new Gold Wing’s DCT features a 1.8km/h forward Walking Mode with reverse of 1.2km/h, operated instantly from a +/- switch on the left handlebar.