Long before sport car manufacturers such as Lamborghini and Alfa Romeo and uber luxury automotive manufacturers known to us as Bentley and Rolls-Royce dibbled their fingers into the extremely lucrative SUV sector, it was Porsche that had taken the plunge and defied industry norms back in 2002. The Cayenne was created and cemented a healthy financial position for Porsche and won a whole new segment of clients.

So when Al Nabooda Automobiles, the regions Porsche distributors, invited us to test out their all-new 3rd generation 2018 Cayenne at the wadis in Oman and the twisties in Fujeirah; we jumped at the chance. The 2018 Porsche Cayenne carries the unmistakable design identity of the Cayenne however the silhouette is further streamlined and an aggressive impression is created thanks mainly to increased length and lower height. The front fascia gets a pronounced bonnet and accented by redesigned headlights and carries Porsche’s signature large air intakes which all underlines the Cayenne’s improved driving dynamics. A redesigned rear wing, wide rear end with integrated light strip (aka the Porsche Carrera 4s) further emphasizes the SUV’s sports pedigree. 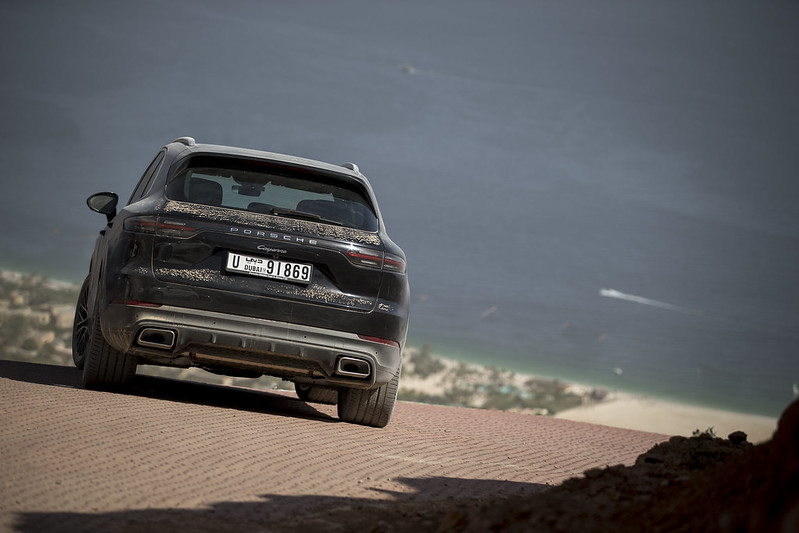 I soon figured out the Cayenne’s completely new dynamics which points to its racetrack roots when we headed towards the mountain twisties. One needs to consider that the Cayenne is equipped with a powerful turbocharged engine and enhanced chassis systems. The 2018 Cayenne’s gets an all-new 8-speed Tiptronic S gearbox and is mated to a six cylinder turbocharged engine in the “Cayenne”, good for 340Hp and 450Nm of torque; a 40Hp increase than its predecessor. 0-100 km/h can be reached at a claimed 6.2 seconds which can be further lowered to a blistering 5.9 seconds if equipped with the optional Sport Chrono Package. 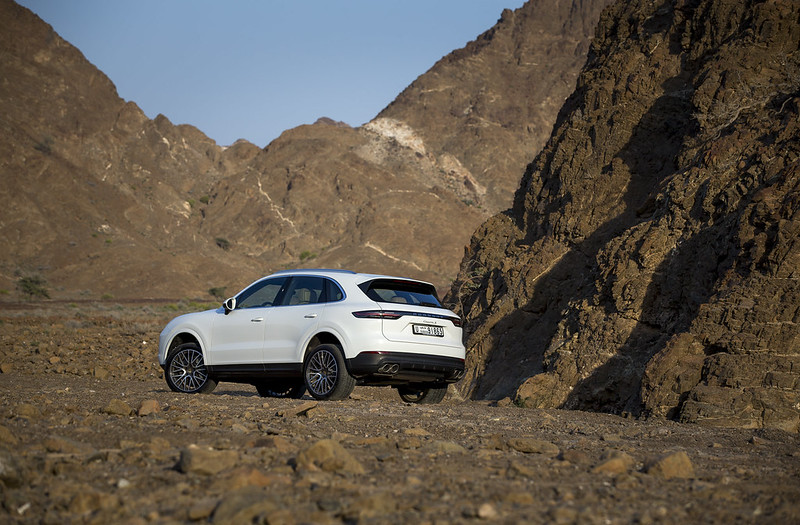 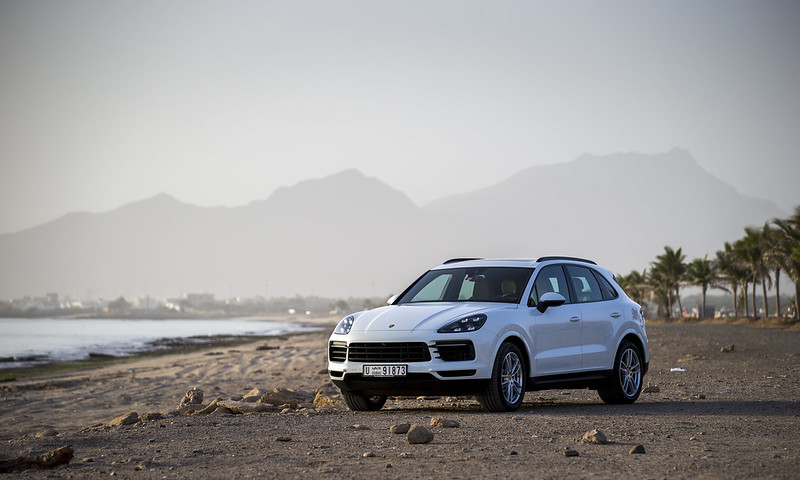 The flagship “Cayenne Turbo” with its 550Hp bi-turbo V8, is the top model in the new generation and exceeds the engine of its predecessor by 30Hp, while the maximum torque of 770 Nm represents an increase of 20Nm. It accelerates from zero to 100 km/h in 4.1 seconds (or 3.9 seconds with the Sport Chrono Package), and achieves a top speed of 286 km/h.

The Cayenne’s off-road prowess is helped by its range of off-road modes. Additional enhancements to the latest generation also include intelligent assistance systems and more connectivity features aimed at offering the improved driver and passenger comfort. Five pre-programmed drive and chassis modes can be activated in accordance with the terrain via the PCM. As well as the default On-road programme, drivers can choose between Mud, Gravel, Sand and Rocks settings to adapt to the relevant conditions. The air suspension, PASM damper system, PDCC rolling-motion compensation and the rear axle steering are also activated if the options are fitted. 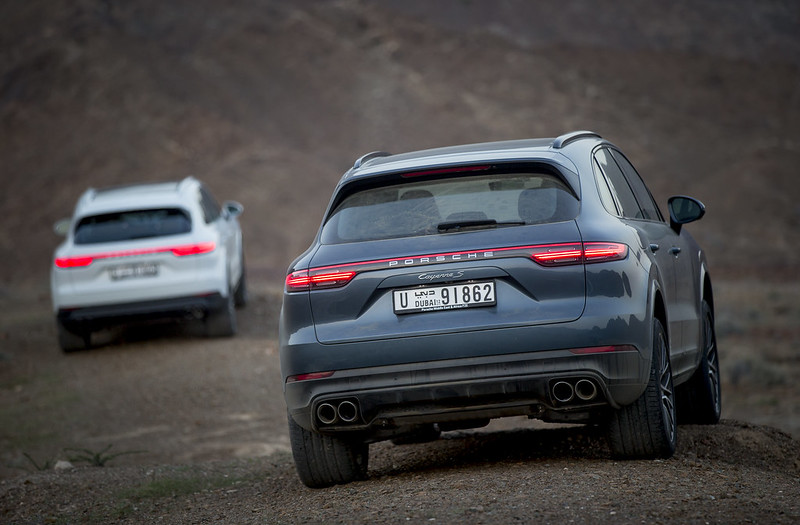 The new Cayenne offers a spacious cabin and convenience features throughout. It certainly feels quite improved from the 2nd generation. The luggage compartment has been increased by 100 litres, while; the Porsche Advanced Cockpit concept brings the vehicle and the occupants closer through increased connectivity and intuitive controls. The center console with Direct Touch Control and a new 12.3-inch touch display act as the driver’s interface to all vehicle functions. PCM can be configured for up to six individual profiles to store a large number of interior settings. 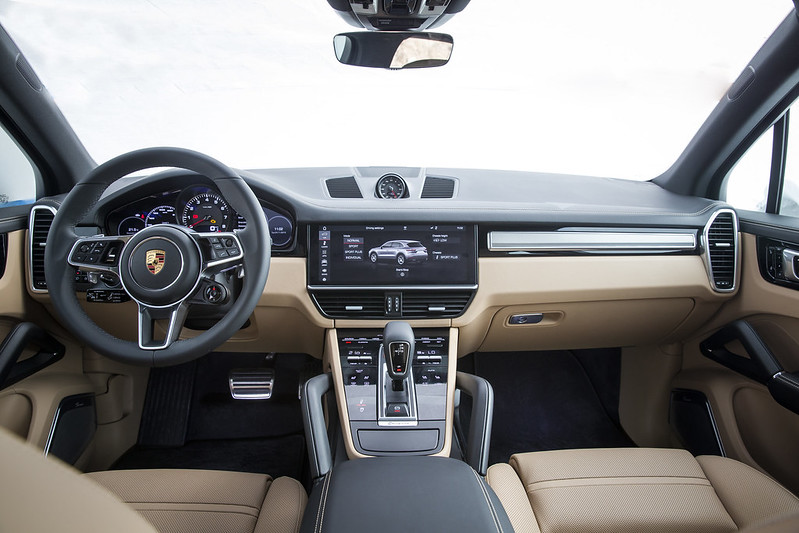 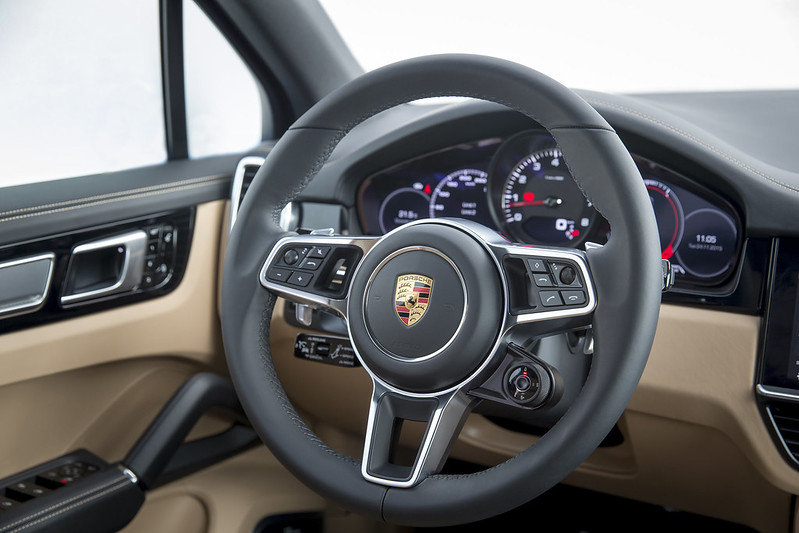 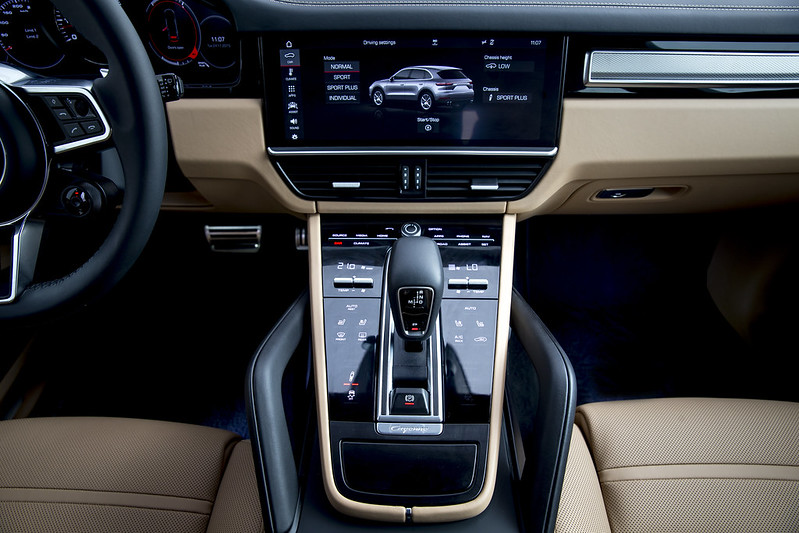 The Cayenne is adept at playing many roles. Whether you are looking for a bit of spirited driving or taking it off the beaten path, the Cayenne has you covered. Rarely one would find so many driving dynamics being in-sync in one vehicle; the Cayenne is one of those rare breed who can seamlessly switch between Dr. Jekyll and Mr. Hyde with the flick of a switch. The latest generation of Porsche’s successful SUV model line is now available in the UAE. Arrival of the brand’s flagship SUV was celebrated at a special event held by Porsche Centre Dubai and Northern Emirates, Al Nabooda Automobiles at their Dubai Showroom, where the Cayenne and Cayenne S were showcased to attending guests. 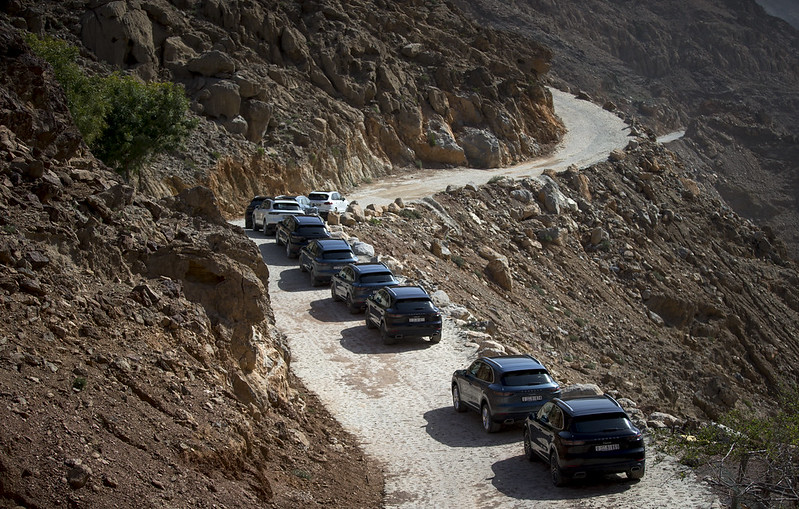