The Coupe is back!! Yes just have a look at what Infiniti has created. Yes, take your time and just admire the svelte lines to what is probably the most stunning looking Japanese coupes out on the market. 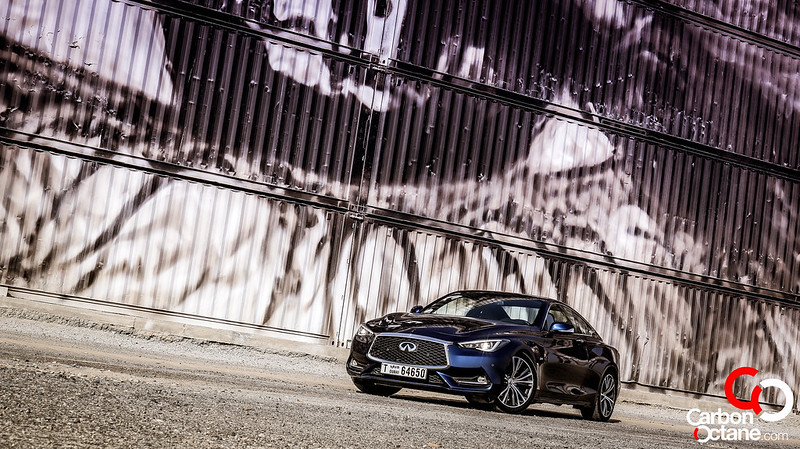 Future generations would be talking about the time when the looks of a car invoked passion and increases the heart beats. I don’t know about the trend of the electric cars and how the shapes of cars would be in the future but Infiniti has been really dabbling their strength not only in creating engines that are powerful and soul stirring but creating sheet metal that is artful and plain sinful as well. The Q60 is the new G36 coupe, the new nomenclature did take some time getting used to but hey even Mercedes-Benz has changed theirs too. So we are not complaining, it’s more simple and streamlined. 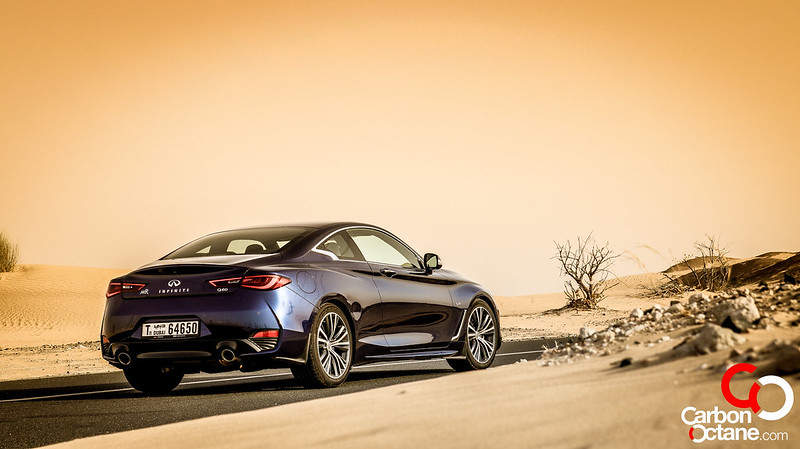 The Q60 comes with 2 engine configuration and 4 trim packages. The first is the Q60 2.0T which is a 2L turbo-charged inline 4 good for 208Hp and an impressive 350Nm of torque and the potent 3.0T, the flagship V6 twin-turbocharged engine producing 400Hp and 475Nm of torque good enough to launch the Q60 to 100kmph in 5.1 seconds. Arabian Automobiles loaned us their Q60 3.0T Premium which is the lower trimmed Q60 they have with the new 3.0L V6. The other trims are called the Red Sport and the Red Sport Tech. For AED 224,000 I would prefer the Premium and because of a few other things which I shall elaborate shortly. 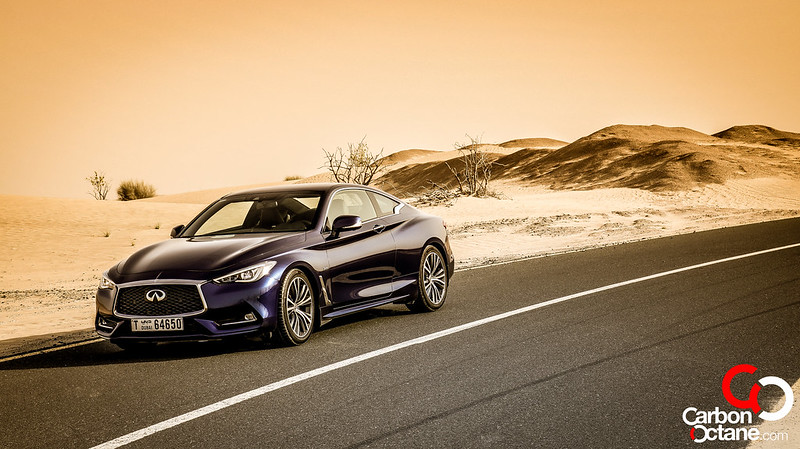 In a nut shell, the Q60 is basically lust on steroids. It’s a hooligan machine that has dressed for prom. This coupe is probably one of the best drift machines out there, in stock form. You can do power burnout just by pressing the accelerator. Yes, this is as tail happy as Mercedes-Benz’s C63S AMG but you need to scale it down, let’s not get carried away here. But you get all this for AED 224,000?!? While the previous generation coupe, the G37s, retailed for AED 150,000 ish and was excellent, can you justify the increase in price? It depends. Let’s see the previous generation G37 came out in 2008, that’s almost a decade ago, time flies huh? So now AED 224,000 does not seem too outlandish to us and you get a rear wheel drive, 400Hp coupe. What more can you ask for? Even Michelangelo would have been impressed with its looks. 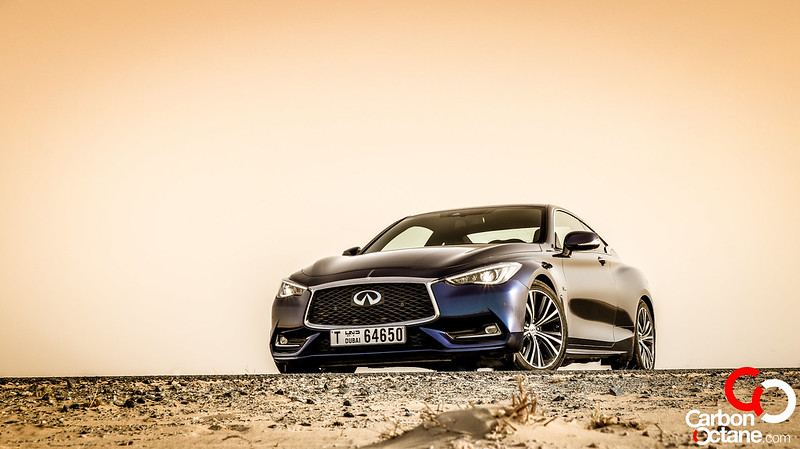 So here are the two biggest different in the “Premium” line as compared to the Red Sport and the Red Sport Tech. The first one is the steering which is a “rack assisted electric power steering” as compared to the “direct adaptive steering” of the Red Sport and the second would be the suspension. The “Premium” gets the tried and tested “independent, double wishbone with coil springs and stabilizer bar” where-as the Red Sport get electronics controlling its sport suspension and a few neat tricks. Yes this all sounds fancy but we loved the plain and simple steering feel and the suspension feel. It felt more direct and we could sense the road and the way the coupe behaved under stress. We have driven the Red Sport, and where it does steer faster and feels slightly firmer on road, it’s the Q60 Premium’s old school feel that has made a believer in us. 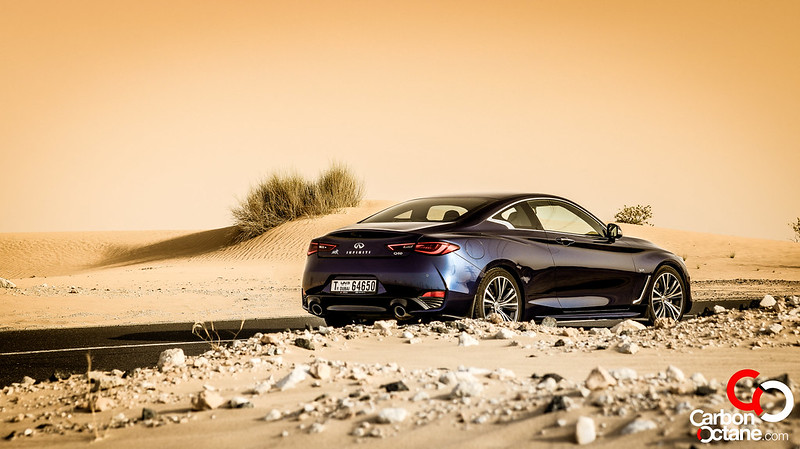 I am a bit old school when it comes to cars and the new tech, I love the standard cruise control rather than the radar guided cruise control. My point is that, you pay extra for features you may or may not need. But Arabian Automobiles here in Dubai and the Northern Emirates understood that each customer was unique in their preferences and thus brought different trims which are more different mechanically and electronically than the color of the leather and its stitching. On the inside the dash view is similar to the Q50, that’s where the similarity ends. The seats are different and the inside door handle bars which reminds us of the Audi R8. The seats are one of the most comfortable we have sat on in recent history, it is soft and provides decent support for every-day use. That’s the thing, when the driving engagement is so good, you would want to spend a majority of your waking hours in the Q60. 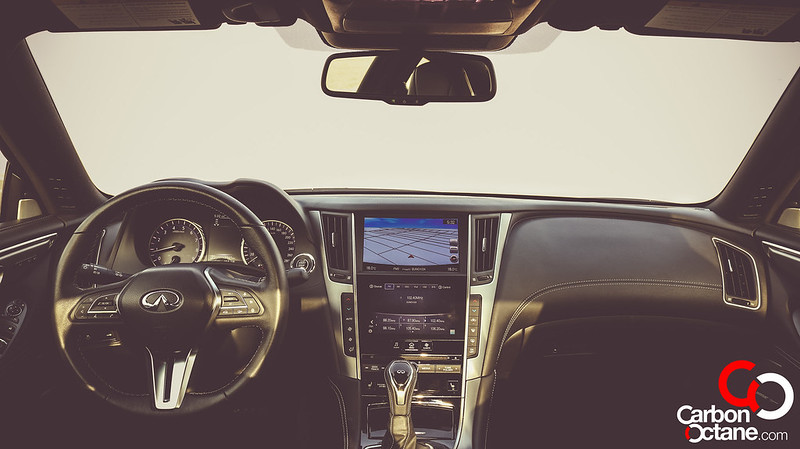 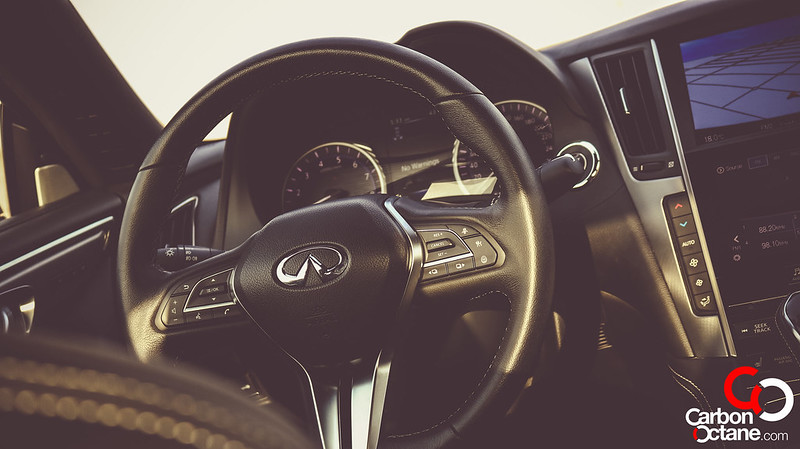 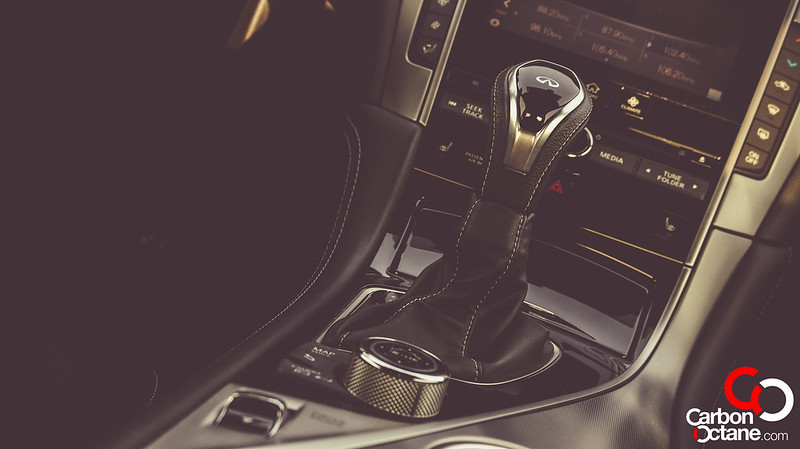 There are many aspects why the Q60 is a winner. First of all it would be the looks, and then the power-plant but we would like to thank Infiniti for keep it “rear wheel drive” – RWD. RWD as getting extinct these days much like the stick shift. Hmm if you are listening Infiniti, how about a manual Q60!!!!! But seriously, it was a long wait for the new Q60 and they have not disappointed.