It’s always the hardest to impress the masses, and I am talking about exactly those who demand the most out of their hard earned money. To them, a car needs to have everything yet priced a segment lower than its category, it’s like the consumers way of saying “give me give me give me”. Kia has always given more to its customers at every automotive segment and the all new Kia Rio is about that. It’s all about giving more than expected and we couldn’t be happier.

2018 Kia Rio Review | A sensible car for a sensible person 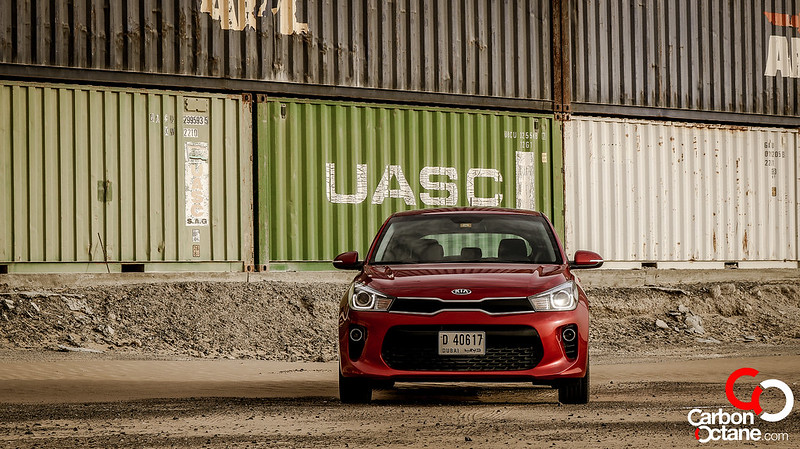 Let’s start with the starting figure, this all new Kia Rio 1.4L could be yours for as low as AED 49,000. This is a great starting point as the extras mainly goes for trim, a bigger engine and things such as sun roof, rear view camera and bigger rims. Our tester came with a bigger engine (1.6L) and ticked all the options you can have in a Kia Rio and yet tipped the scale at a rather modest AED 61,900. 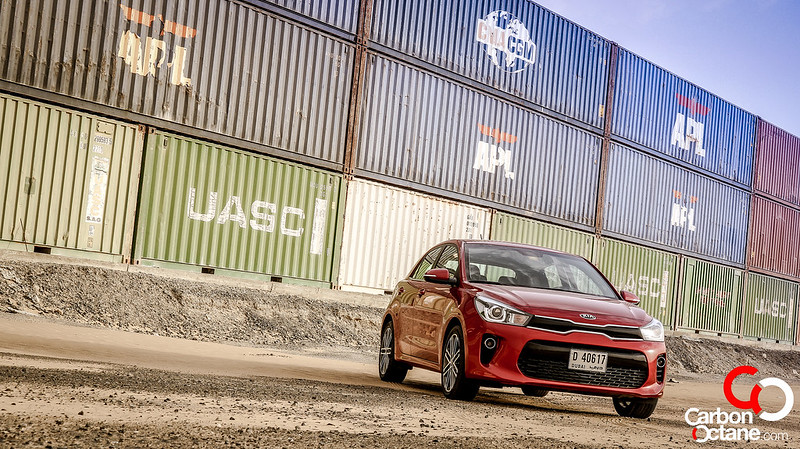 I wanted to drive a point across here. One of our all-time favorite small-sized vehicle was Ford’s Figo. For its price the car gave everything in spades and on top of that the ride quality was great except for the quality of its interior. Kia on the other hand with the Rio has stepped up the playing field in its category in almost everything. The interior is nothing less than fantastic in its design and materials used for the price we are talking about. Gone are the days when we would re-assure ourselves by saying “well the car only costs this much, what more can we expect!” Kia has just shown that a lot more could be expected if not demanded from now on. Ours came with a rear view camera as well!! 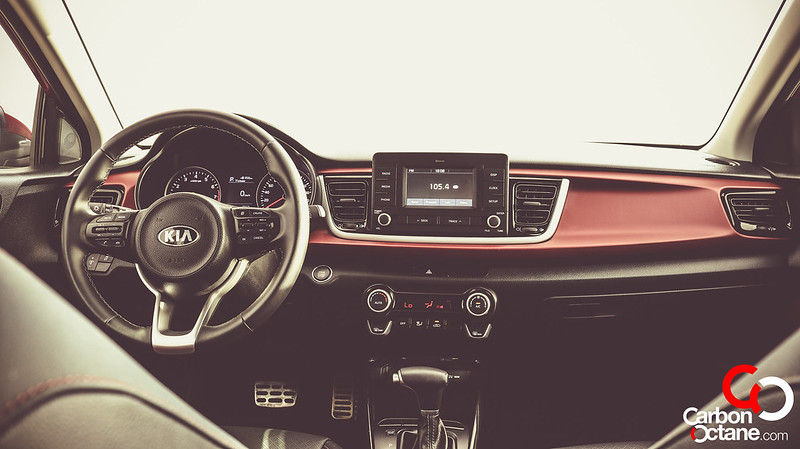 How is the drive? That’s the most important part I guess. Let’s face it, all manufacturers have basically standardized the list of options for vehicles for each segments. The Kia Rio has the necessary Bluetooth, USB’s, adjustment controllers on the steering wheel etc. But, the drive is what we are interested and the everyday tactile feel of the things we touch the most, ie. the steering and the gear shifter. They are encased in smooth leather and feel very nice, nice as in what you would expect in high end vehicles. But the ride is something else, it’s plush for a change and not stiff. The struts evens out even the most demanding speed bumps with a nice bounce. Everyday drive in the new Rio is actually a very pleasant one, very much akin to that of the new Civic from Honda. 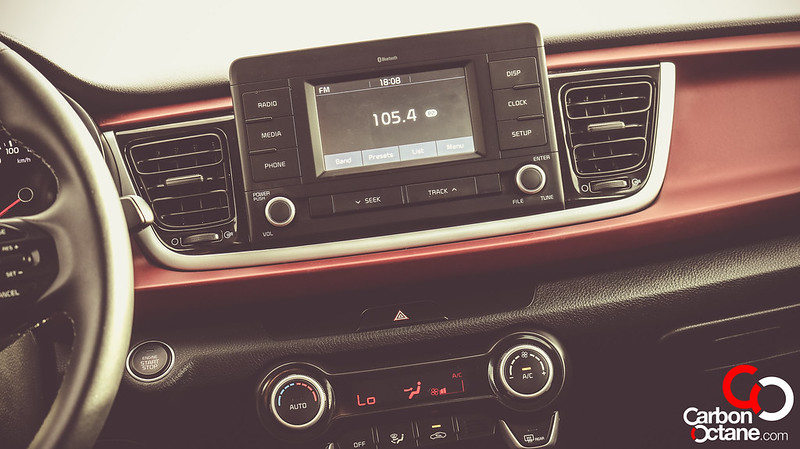 The 2018 Kia Rio is 15mm longer than its predecessor and sits 5mm lower giving it a more aggressive stance while the top of the range Rio comes with 17 inch allow wheels. The Rio also boasts highest cargo space of 325 liters in its category and has increased its fuel tank by 2 liters to 45 liters in total, which according to our calculations would give an extra 25 kms of range between fill-ups. 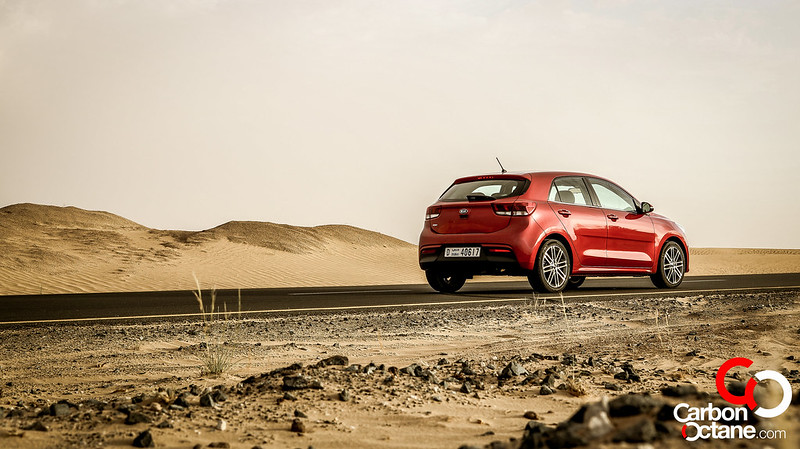 The engine is smooth revving and while 120 horses is not a number we can really happy with, it’s the usability of the power that makes it stand out. For example, by pressing the accelerator hard wont engage in any significant g force but power build up post 3000rpm is enough for city traffic. We did not feel the need to take manual control of the gearbox nor did we need to rev up to 5k rpm for each gear shifts. Its 151Nm of twist is decent enough for most situations we may face on the streets. 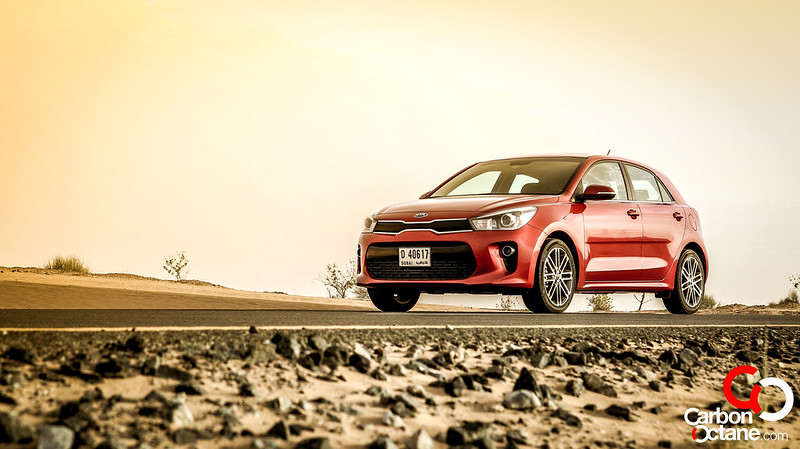 We managed to get a bit over 500 kms on a full tank but do understand that the car was switched on for the entire duration of our photo-shoot period with the AC on at full load, our moment of refuge in between the shoot and cooling off in the car. The Kia Rio is sets a few benchmarks in its category and is a neat little package in a rather sexy skin. We do approve of it massively.