Sometimes life takes a turn for the unexpected, unexpected in a good way. “Oh boy!!!” I kept on repeating myself as I jumped into the all new Alfa Romeo Giulia QV. Why? 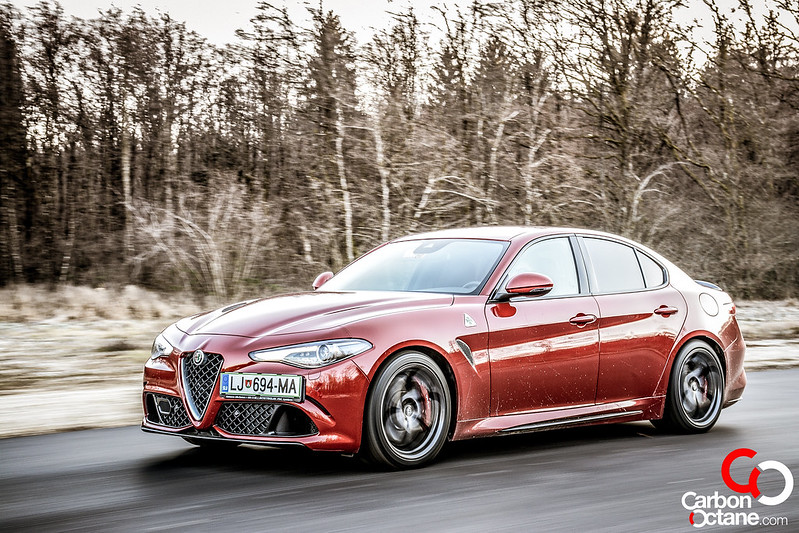 Here in the Middle East, Alfa Romeo has had a rather slow growth and catered to only Alfa aficionados, it has not grown into a mainstream luxury or even a sports oriented premium car brand unfortunately. Which is a big shame as it is one of the most passionate brands in the whole car industry. Same as the temperament of the Arabs, Alfa Romeo cars are full of emotions. Positive, energetic. Historically, Alfa Romeo is in some way the mother of the very famous Italian marque; Ferrari. Don’t believe it? Just Google it! 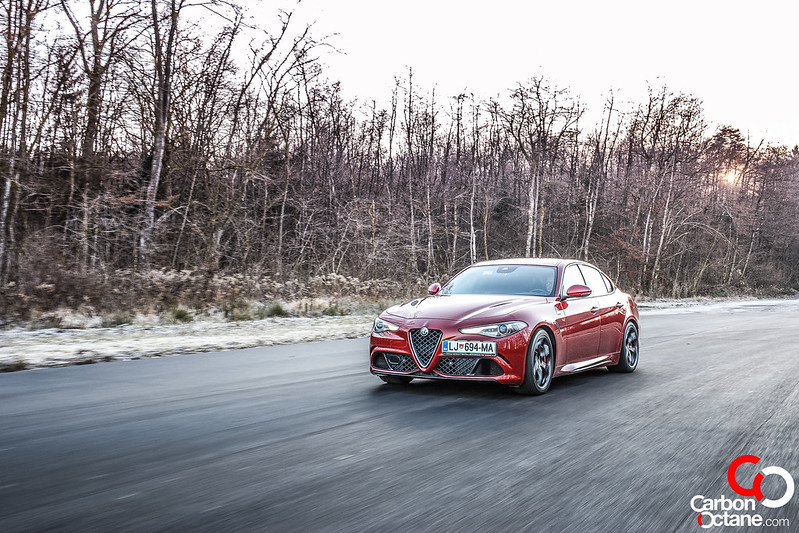 I was very impatient to travel from Dubai to Slovenia for New Year’s holidays to see my family and to test two beautiful Italian masterpieces. The first week I drove around in the Abarth 595 Competizione which is a completely different story than the Giulia. A Small pocket rocket that has an amazing sound and ideal for twisty roads in the Alps but that’s a story for another time. 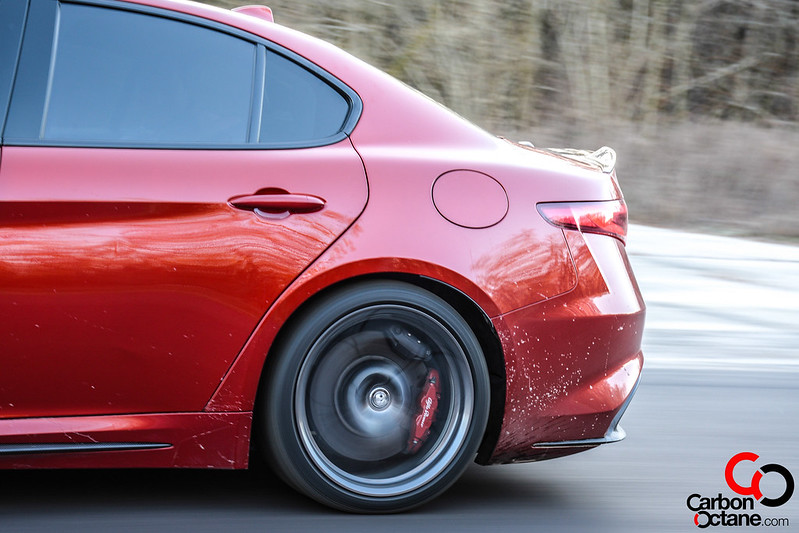 Let’s get on with the much awaited Giulia. But not any ordinary Giulia, it’s the Quadrifoglio version. Yes! The one with 510 Hp! Rear wheel drive and with a fast ZF 8-speed automatic gearbox. Of course, you can change gears in an F1 style using the pedal shifters! In case you were wondering; Quadrifoglio stands for “four-leaf clover”! And yes, there is a story behind this as well. 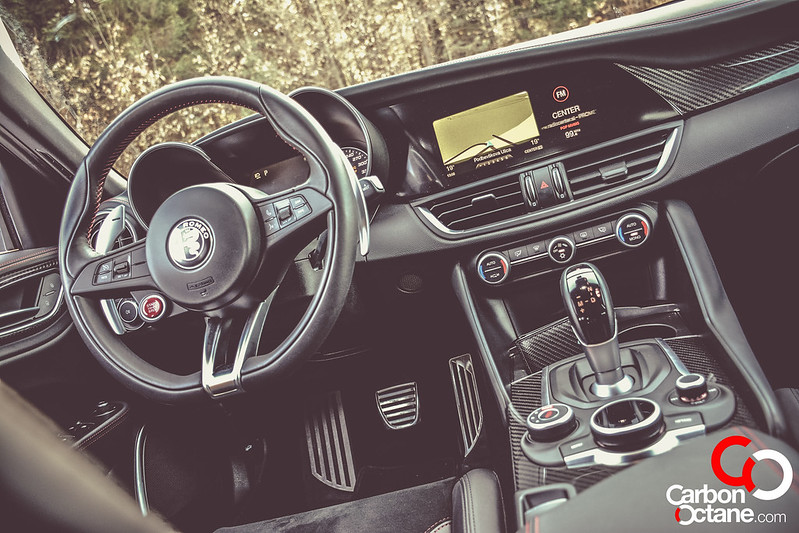 But what is an Alfa Romeo? This unfamiliar brand in the Middle East region is as mentioned before an Italian car manufacturer, founded as A.L.F.A. (“Anonymous Lombard Automobile Factory”) in 1910, in Milan. The brand is known for its luxury vehicles and has been involved in car racing since 1911. They are one of the most successful car brands in racing. They won titles in F1, Le Mans, ETCC and even DTM with their legendary 155 V6 T1, which is a predecessor of the Giulia. Rivals like BMW and Mercedes were ashamed at their own home grounds! 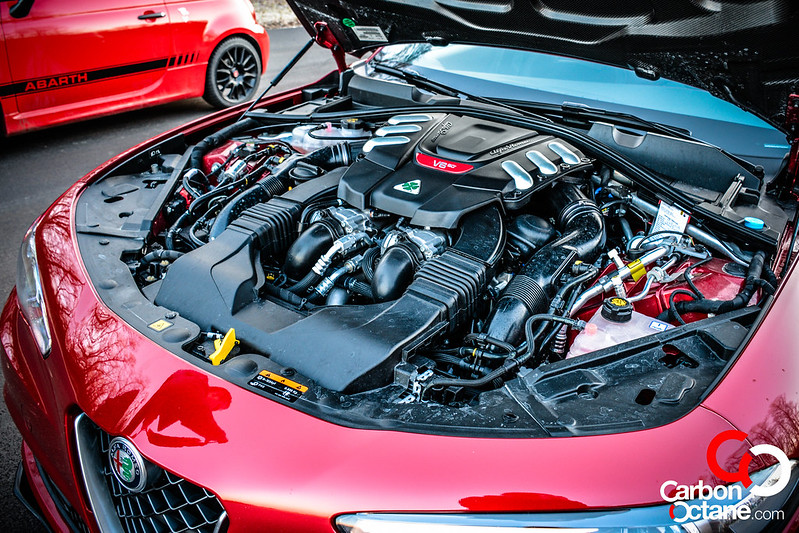 With a rich history and pedigree and after many years of stagnation, they launched a proper car. As they like to say, one of the last real enjoyable cars before all cars become autonomous and electric. Why is it so? 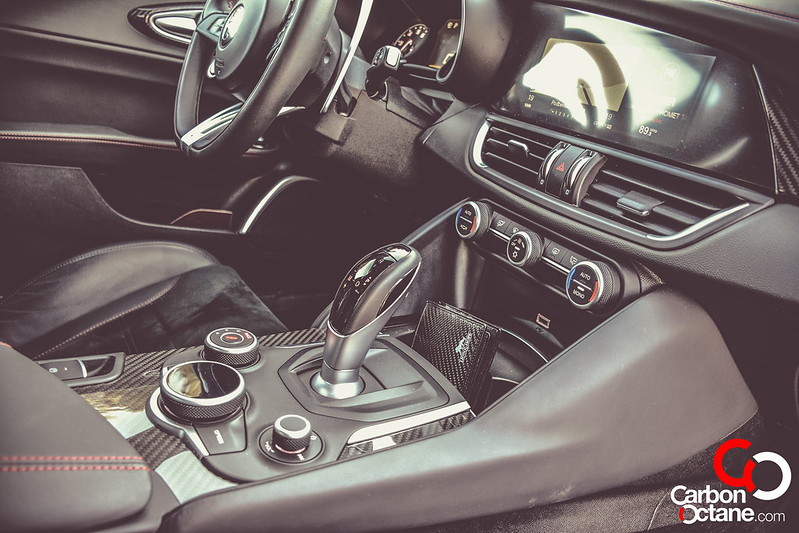 It is easy. They took an all-aluminum, twin-turbocharged 90° V8 Bi-turbo engine from its sister company, Ferrari and dropped 2 cylinders. Yes, you can just imagine how amazing the engine sound could be, especially when you turn the ECU settings from Normal to Dynamic, or be brave enough to switch to Race Mode. But do it carefully. It cuts almost all electronic assists off. Giulia’s rear end starts to swipe around like a bull if it is in wrong hands. I stepped on the throttle; first gear to maximum RPMs around 5,500, second gear followed by a loud “braaaaap”, and then third gear and still I had to hold steering wheel very tight as I could feel how the rear end of the car is still fighting to get grip on the small, narrow road on a remote part somewhere in the beautiful Slovenian countryside. 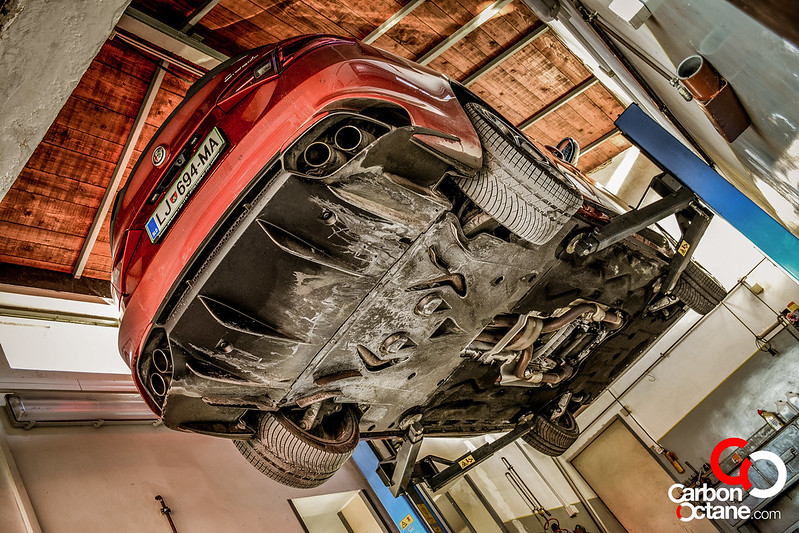 I was lucky to drive the first few days on the normal twisty roads around Slovenia. Gorgeous! The Quadrifoglio competes with cars such as the Mercedes-AMG C63, BMW M3 and Cadillac ATS-V. But it just pours more emotion in your brains when you are changing gears and hit corner after corner. You just do not want to stop, as in the medium fast corners the suspension gives you a lot of feedback which you can trust. But as I mentioned. I would advise you to have some sort of electronic assists and use the Race Mode only for the track. 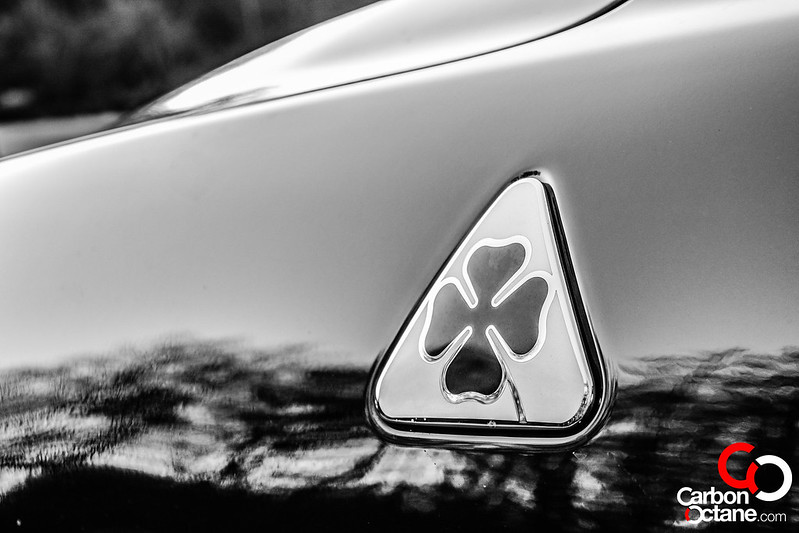 Thanks to cylinder deactivation, which means that this Alfa has the ability to switch off three of the six cylinders, it can on paper achieve a fuel consumption around 8.5L/100KMS. Not bad, but trust me, fuel consumption would be the last thing on your mind when you take your reins on the Alfa Giulia QV. I was avoiding all setups lower than Dynamic during my test! 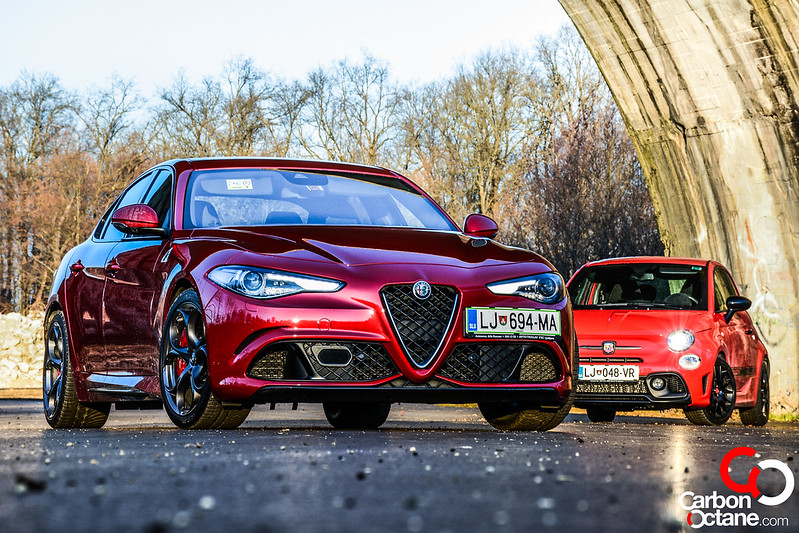 The Quadrifoglio weighs only 1,524 kgs. This is achieved thanks to the Quadrifoglio having the composite materials and light alloy construction, as well as featuring the roof and the bonnet made of carbon-fiber. You will recognize on the street the Giulia Quadrifoglio by its specific front bumper with a carbon-fiber splitter and enlarged air intakes for the twin intercoolers and for the brakes. On the sides, the front wings have outlets to extract air from the wheel wells, the side skirts are specific to this model, as are the 19-inch light alloy wheels. At the rear, a low-profile carbon-fiber spoiler is applied to the boot lid, and a rear diffuser makes up the lower half of the bumper, flanked by quadruple – Ferrari style – exhaust tips. Working in conjunction with the faired-in underside, the diffuser is fully functional in generating down-force as is the front with its “Active Aero Splitter”, which can vary its angle of attack by 10°. Alfa Romeo claims these active aero features to be firsts in the Giulia’s market segment and are able to generate up to 100 kg of down-force at 300 km/h! 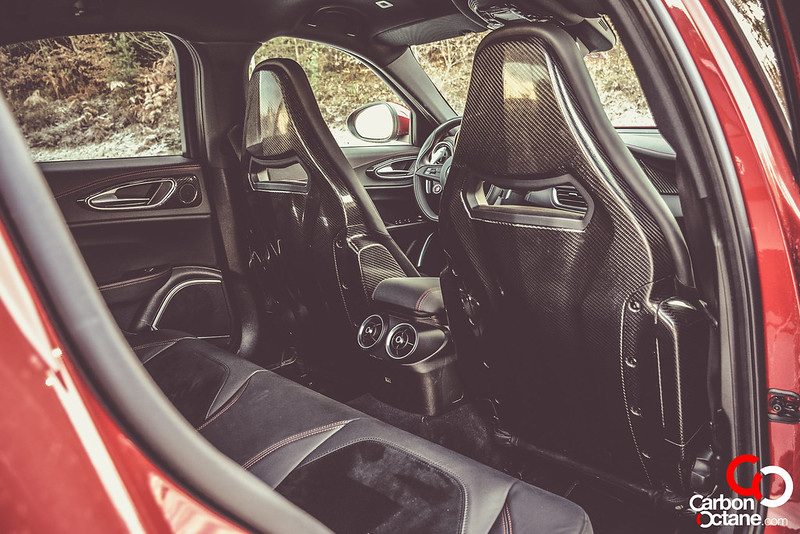 Mechanically, this model is fitted with a torque vectoring rear differential, able to send 100% of the torque to the left or right wheel in a specific corner, which you can easily feel in the fast corners. This allows you to go way faster around the corner that you ever imagined. Our Giulia QV was equipped with a fast F1 style gearbox which changes the gears faster that you blink your eyes and gives out Alfa’s legendary sound effects every time you press the shifter – up or down. The braking system uses carbon-ceramic rotors which takes care of the immense braking power needed to stop the insane speed it achieves.

To me, owning a Giulia QV would be like living a lifestyle which no other brands offer, the emotions of having an Alfa is very special which cannot be mimicked by others no matter how much they try.