The all-new 2017 GMC Acadia has shed almost 700 lbs and skimmed down on its fat but gained 3 inches of legroom on its 2nd row seats. It’s powered by the same powertrain that’s beating inside the Cadillac ATS and pushes out a very impressive 310 horses. Is it the perfect family hauler that fits into any parking spaces in the UAE with ease while giving the passengers connectivity and range from the driver. Yes, yes and yes.

For those of you who wants to know what the Acadia is all about, it’s a 5-seater or a 7-seater depending on the trim, front wheel drive and all-wheel drive capable family crossover that goes head on against the likes of the Nissan Pathfinder and the Ford Explorer. And in the GMC lineup of SUV and crossovers, the Acadia fits nicely between the Terrain and the Yukon. Our tester was the mid-level trim called “All Terrain”, and though the name suggests serious off-roading capabilities, you need to understand that the Acadia is an AWD and is limited to what AWD can do as compared to being a 4X4. But having said that, its terrain management system is intelligent enough to take the Acadia off the beaten path to almost anywhere sensible. Apart from very soft sand, the Acadia is equally at home on and off road. 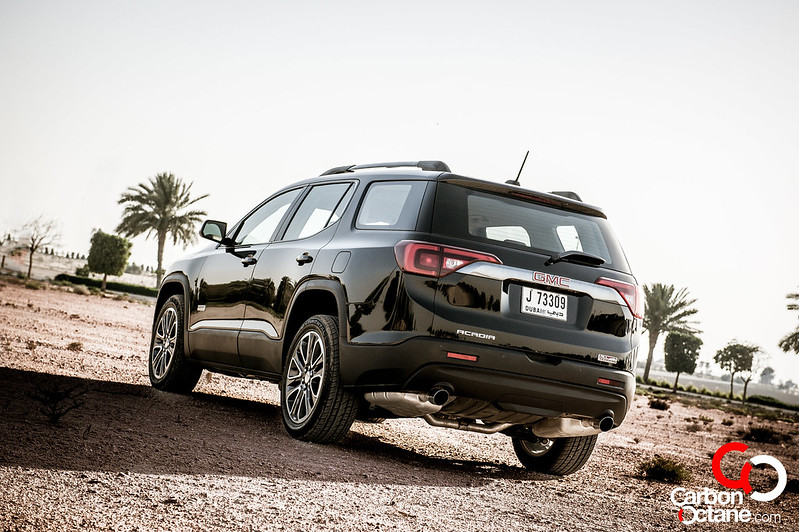 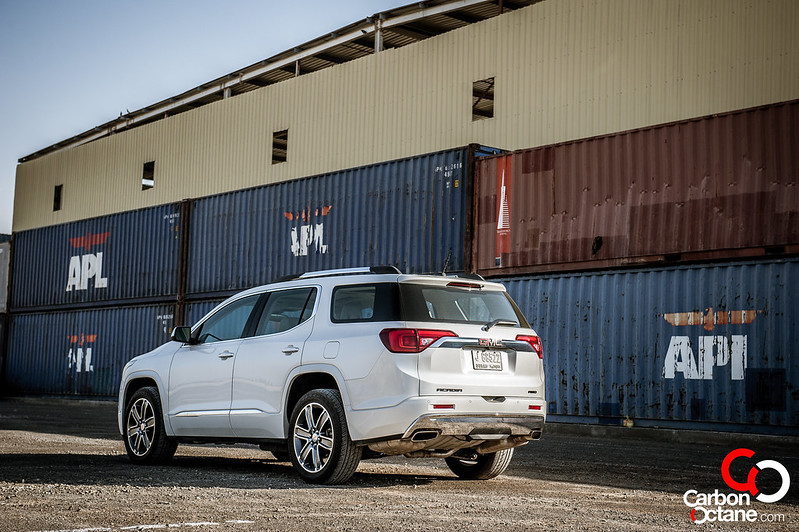 For 2017, GMC stepped up their game by introducing the all new Acadia. Proportion have changed, while it’s narrower and shorter than the previous year model the new Acadia’s design overcomes that fact and what you get is a handsome ruggedness without looking too utilitarian. It is primarily a family SUV and you need to keep a sportier yet urban look to it. The Acadia does just that. The “All Terrain” trim makes its debut on the Acadia for 2017 and de-chromes the regular exterior trim into a rather subtle but masculine chrome black and dresses unique 20 inch rims. Our tester came in pearlescent black and the “All Terrain” pack makes for a much sportier look than the Denali trim. 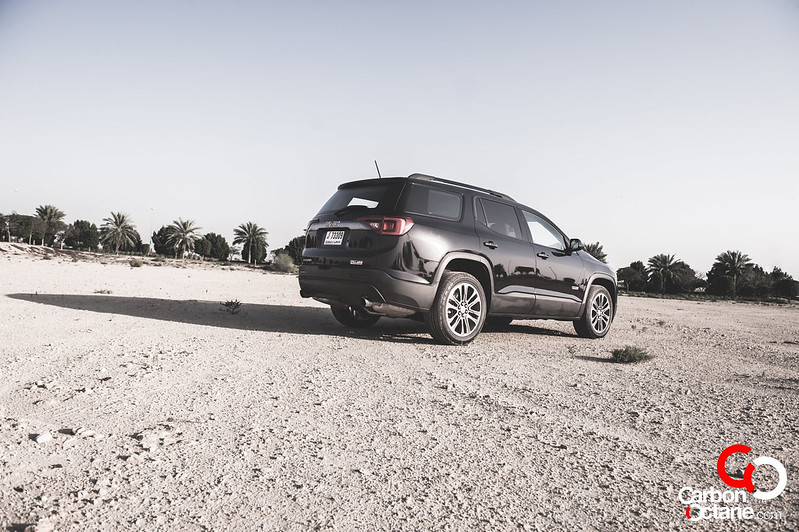 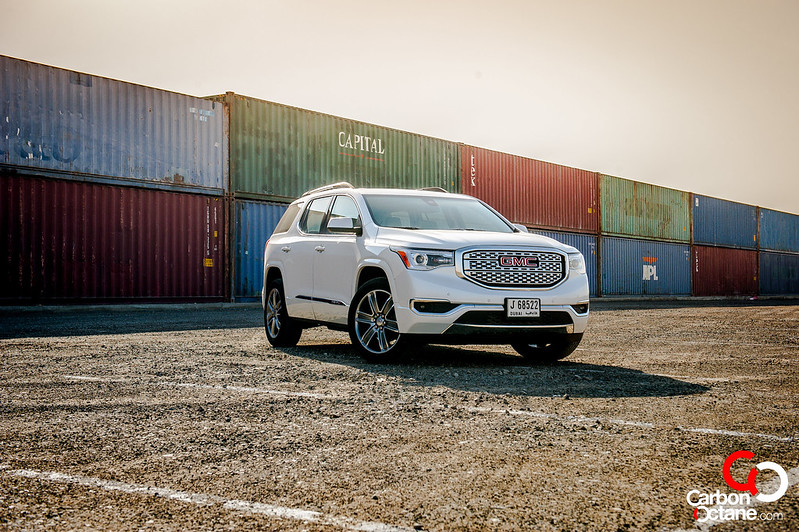 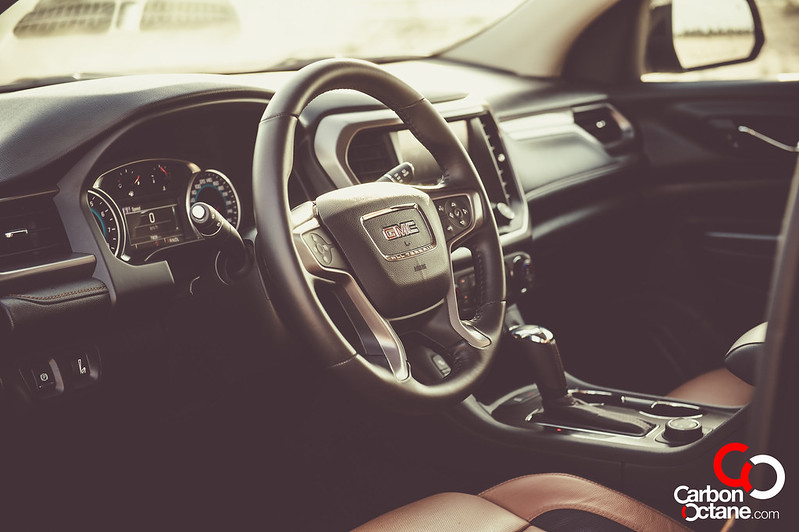 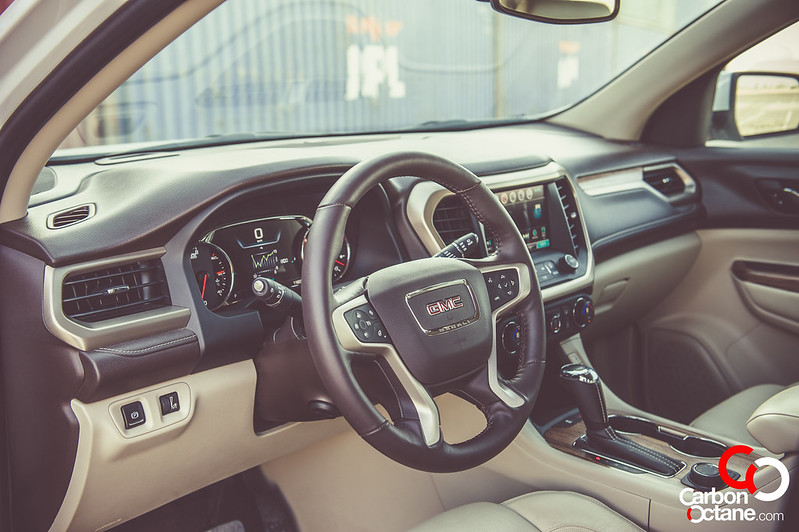 You get sportier looking seats which are comfortable and loose the third row seats but gain around 42 cubic feet of cargo space. Seat cooling options are not available which is not the case when you select a next higher trim and you don’t get a sun-roof. Apart from this everything else are identical. The steering is meaty and for the first time GMC were able to weight the steering just right. It’s not as soft as that of the Yukon and nowhere as tight as that of the Nissan Patrol. This makes a lot of difference because our entire time with any vehicles revolves around the steering wheel. 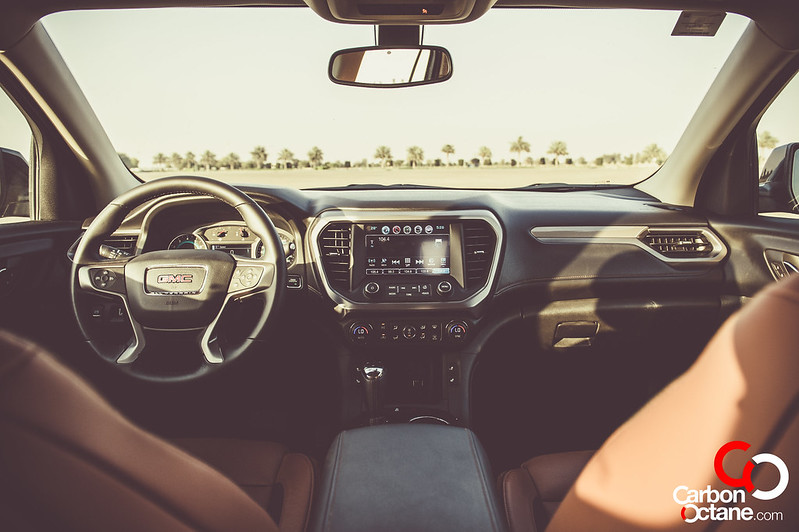 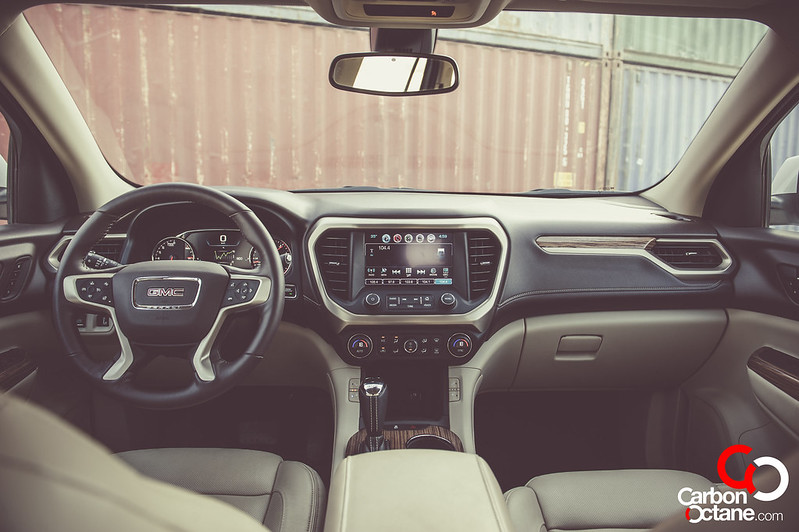 The new Acadia takes on from the connectivity provided by the Yukon, you get full integration with Apple Car Play apart from Bluetooth connectivity and there are enough USB’s to connect your iPod’s. The V6 provides for a very relaxed yet firm pull from any gear and to top it all, GMC is including cylinder deactivation throughout its range and much like the ATS the Acadia switches off 2 cylinder under cruising, saving fossil fuel and getting you almost 700kms on a full tank of gas combined from our usage in the city and on the highways. 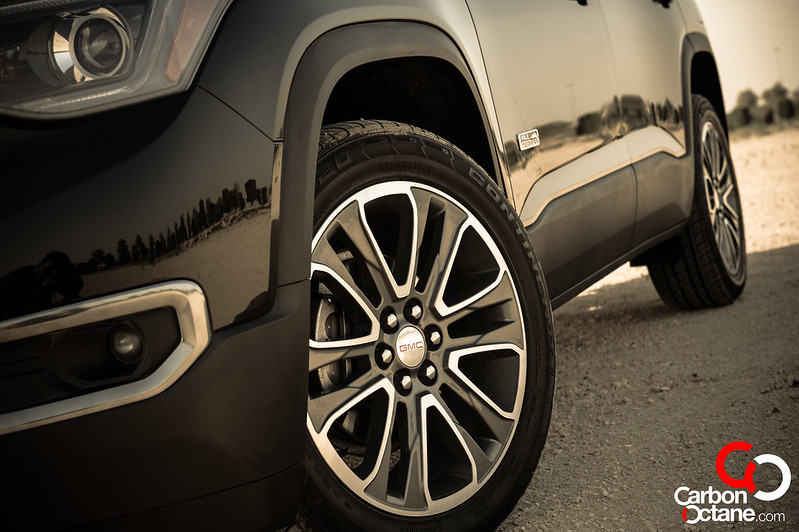 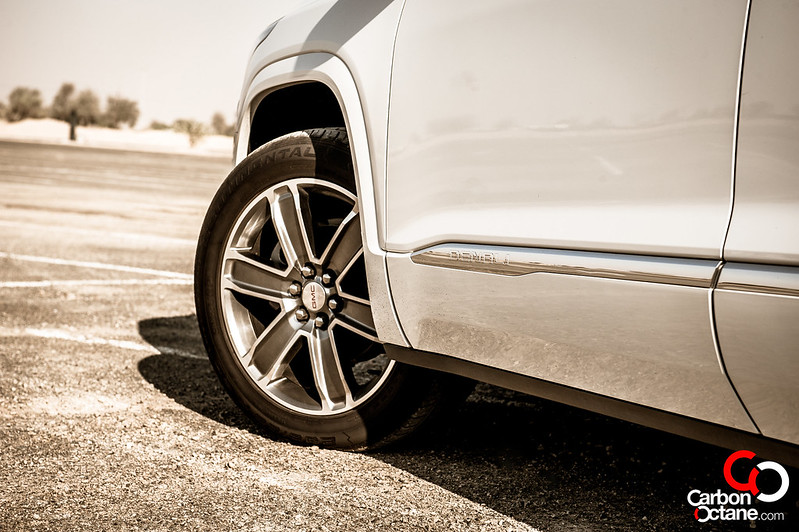 Our stint on the Acadia has rather been a stress free affair. There were many stand-alone features which made it special. The steering, the linear acceleration from the V6 and space. It doesn’t look big but manages its interior space very well. A great package for those who want to refrain from getting a full sized SUV yet not compromise on their family needs. And with GM dealership now offering 4 years 80k kms service package, the Acadia is a deal you don’t want to miss. 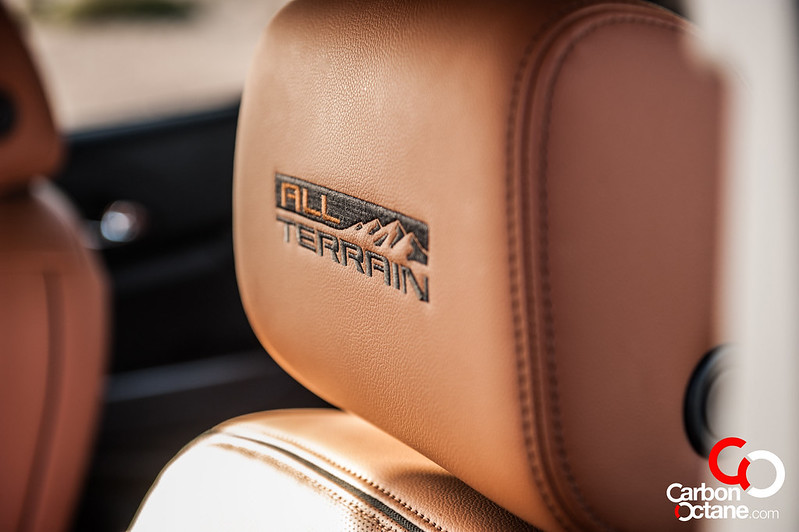 The Acadia starts at AED 129,900 and tops out around AED 211,000 for the Denali trim. The All Terrain trim fits in between the base version and the price of the Denali. 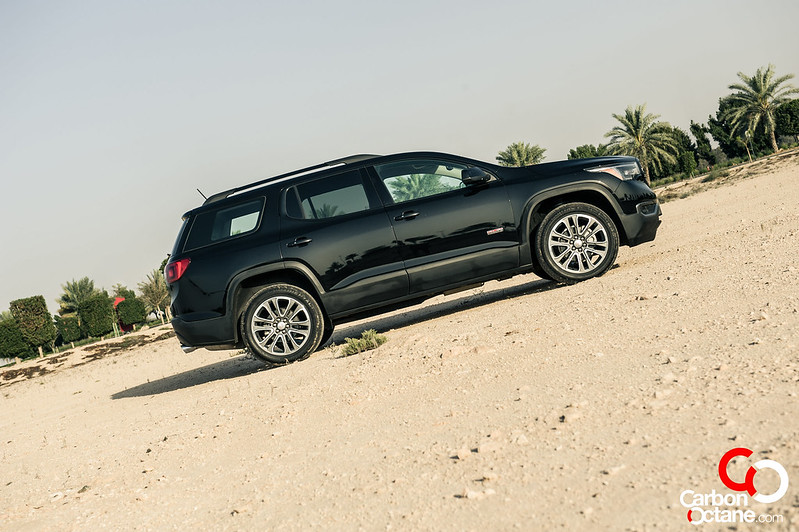 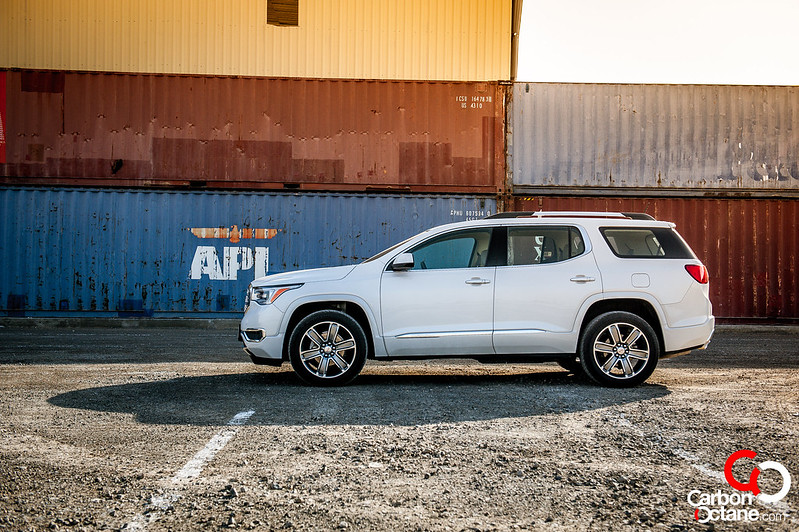 2017 GMC Acadia All Terrain Review in Dubai: Price and Specs