Lately Nissan seems to be revamping one of their best seller in the region with more power and goodies from their in-house tuning department “Nismo”. While manufacturers like Range Rover are bringing out the SV Autobiography version with more power and Toyota coming up with a more off-road worthy Land Cruiser in the guise of the Land Cruiser Xtreme, Nissan went into a more customer focused direction by dropping 2 cylinders and introducing the V6 variant of the very capable and popular Patrol.

Visually one cannot differentiate the difference between the V8 and the V6 variants of the Patrol. Our tester came fully loaded with 20 inch rims and city pumper, fondly called the Platinum City. Did Nissan need to discontinue their V8 SE and replace that with the V6? As an off-road enthusiast you would benefit for the extra displacement and cylinders and power but their sales figures shows that a lot of potential customers shy away from the V8’s because they feel that it would just guzzle gas when in reality they need the Patrol to haul their family for road trips and trips to the malls. So to answer this large segment, they have come up with the Patrol V6. 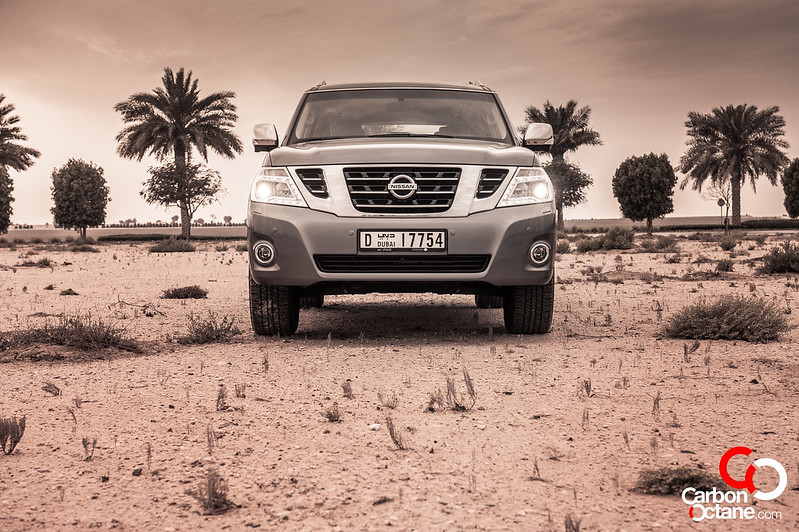 So here’s the run down with the V6, it comes with 275 horses and lays down 396 Nm of torque at 4000 rpm. That’s 42 horses down from the now discontinued Patrol SE V8 and reaches 100 kmph in 11.5 seconds which is around 4 seconds slower than the 400 hp Patrol V8. Does it make a huge difference on the road and everyday driving? No!! It certainly does not. That was our main concern, as to whether the V6 can pull this mammoth. It has shed 90 kgs, that’s mainly due to the weight savings from the smaller engine but the Patrol still weighs 2705 kgs. 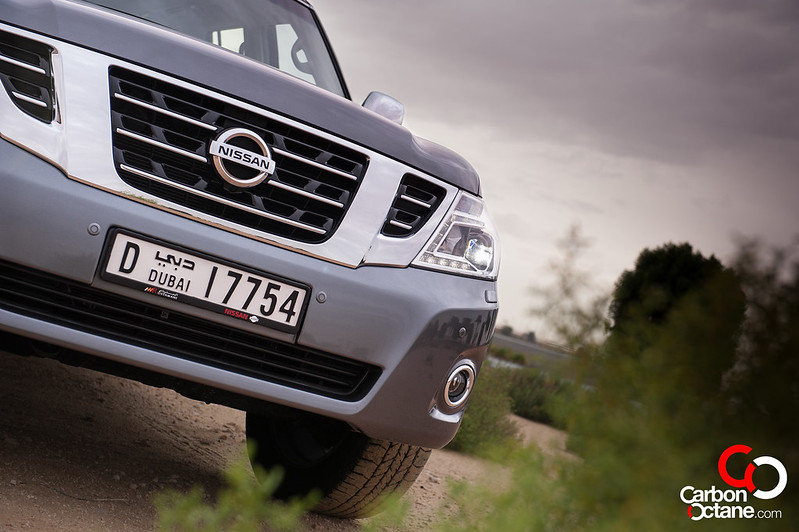 What Nissan has done, is that it has managed to make use of the power where and when it matters. The initial sprint of the Patrol V6 is very similar to the V8 and no-where near the laggy feel of the Toyota Land Cruiser V6. Nissan has achieved this by giving access to most of its 396 Nm of torque at a lower rpm which gives the initial grunt. So yes, we had cringed when we heard the news of a Patrol V6 but we were blown away to find out that the V6 actually feels like a V8 on the road and that talks a lot on the effort and engineering it took from Nissan to make the V6 run and feel like the outgoing V8 SE. 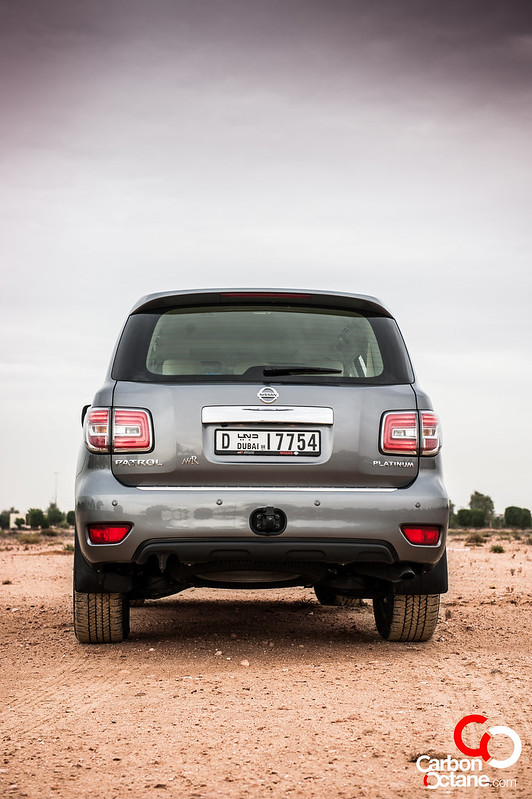 The entry price point for the Patrol was an issue as well, the base V8 patrol did cost well over the 200k aed mark but now the V6 starts at AED 181,000 and the range topper Platinum City V6 tops out at AED 259,000, that’s almost AED 70,000 less than the equally trimmed V8 Platinum. Step inside the V6 Platinum and it’s exactly the same as the Platinum V8 minus the ventilated seats. So that in itself says a lot to Nissan’s direction into having Patrol V6’s. Even the basic V6 which comes with almost everything minus the leather starts at a very low 181k aed and you get the same terrain management system which is standard in all the Patrols’. 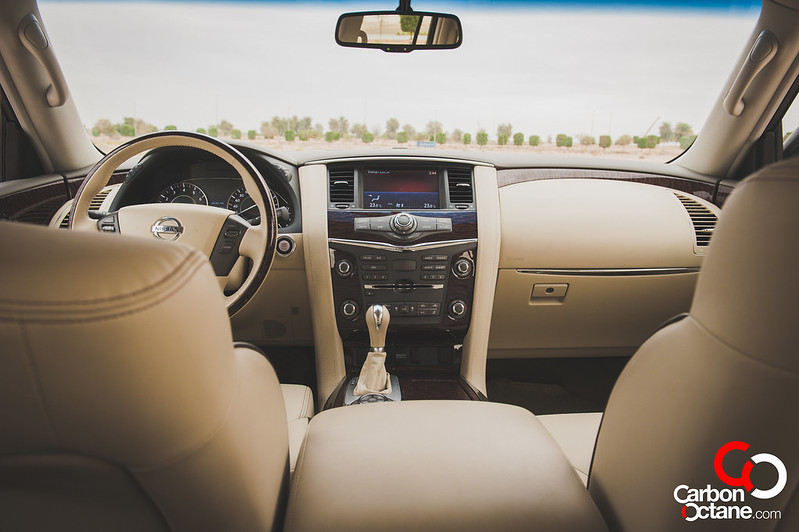 The Patrol V6’s road handling remains largely unchanged from the V8 variant that speaks volumes since the V6 is down by 125 horses from the V8 LE, which is the other option, if you don’t consider the Nismo version. The suspension does not have the tricky hydraulic version which comes on the loaded LE but we liked the feel it gave on the road. 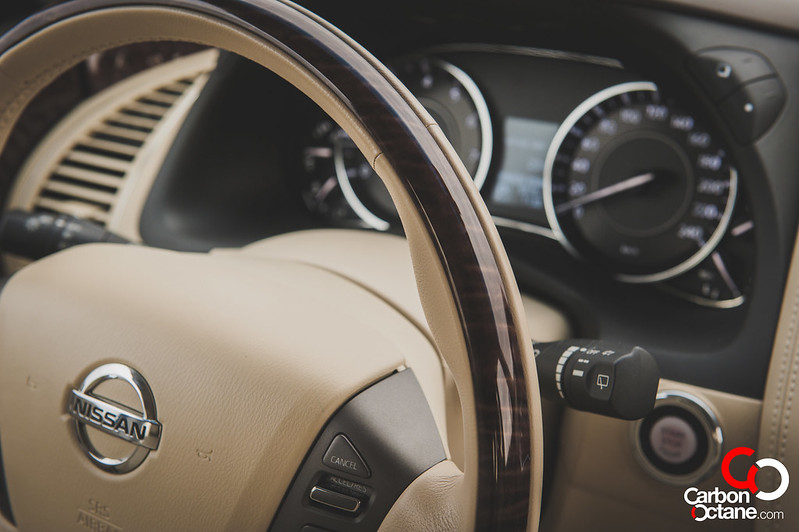 Body roll was manageable for a vehicle this tall but overall there are very few SUV’s out in the market that can do what the Patrol does at its price point better. We can’t think of any by the way. 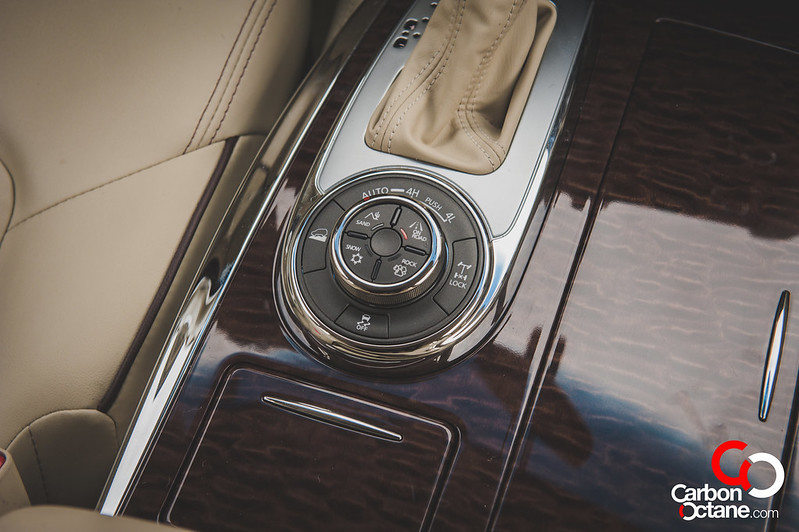 The 20 inch tires that comes with the top end V6 is largely for spec’d for on road handling and drivability and the occasional curb jump and beach runs, serious off-roading would best be handling with more meat on the sidewalls for flex and spread. 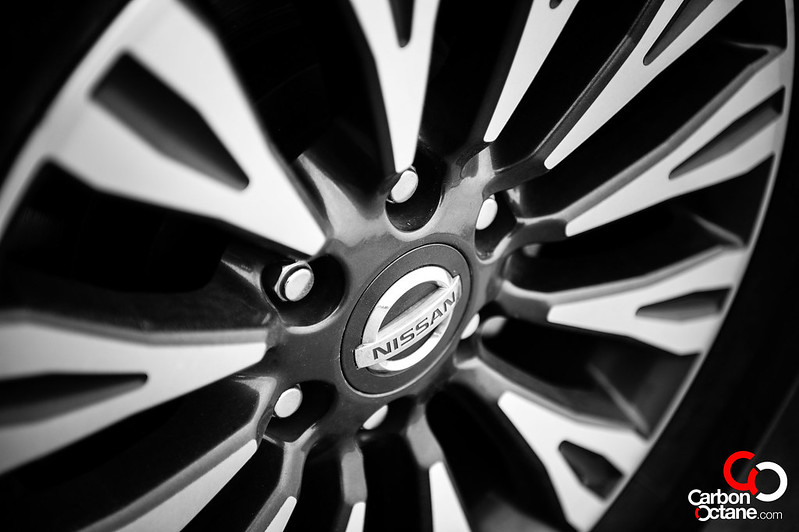 So there we go, what started as a shocker when we learn of the Patrol V6 ultimately boiled down to the fact that the Patrol has lost not much of its V8 oomph or character. It could lose some on the top end of its capability but that’s because of it having less power. For everyday usage and ultimately being easier to maintain since its 11 % more fuel efficient, we believe that the V6 option would a big welcome from those who till now have shied away from the V8 Patrol fearing it’s upkeep charges. 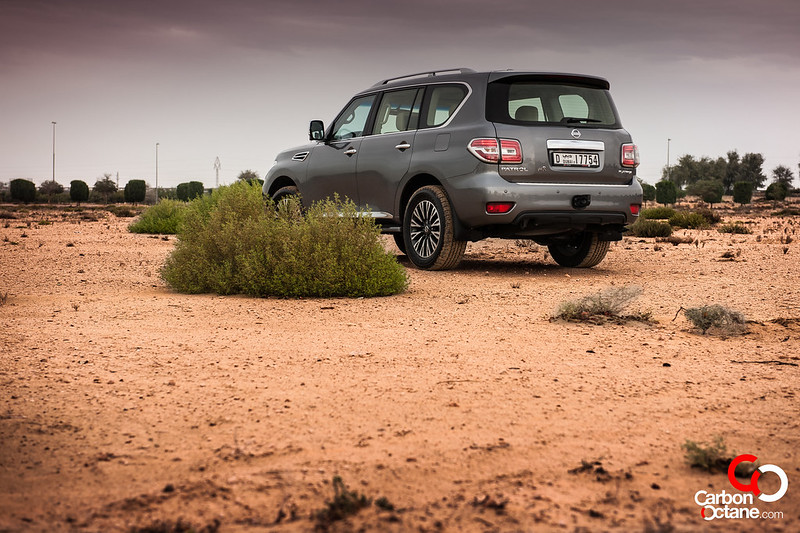 Our tester came from Arabian Automobiles who are the authorized dealers for Nissan for Dubai and Norther Emirates.