Turbochargers are here to stay and with Mercedes-Benz now filtering them throughout their entire range, it’s time for the SLC’s AMG to downsize from the V8 and get itself the 3.0L V6 twin turbocharged power-plant.

Just have a look at the new numbers. The SLC43 AMG drops around 50 horses from the SLK55 AMG variant it replaces but gains torque and reduces front-end weight at the same time. What it means is that it is more nimble but more impressive is its 520 Nm of torque available from just 2000 rpm; this is a sure shot in getting whiplashed out of any corners in full tilt. Impressive are the numbers but its competition are rather potent as well. It has a lot of formidable opponents like the Porsche 718 Boxter, Audi’s new TT and Jaguar’s F-Type V6S. 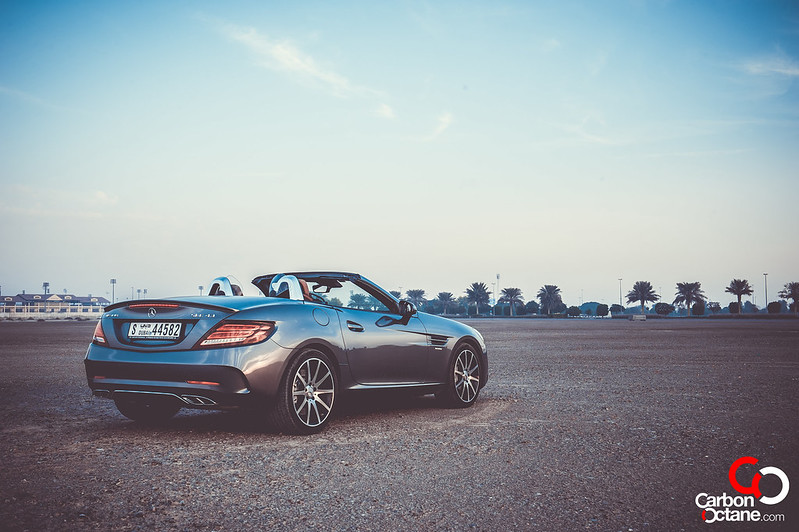 Would you believe that it’s already been 20 years since Mercedes-Benz has launched the first SLK? The transition of this mini SL’s fascia has gone from the more aggressive SLR’esque looks to a more sedate variant in the 2012 SLK55 model and now they have retained that general theme. It is easily recognizable as an SLC/SLK and Mercedes-Benz designers preferred keeping the theme the same and played it safe. But we loved what it did with its nose, it does stick out a bit more and that creates character and a more Gigi Hadid like jaw line. 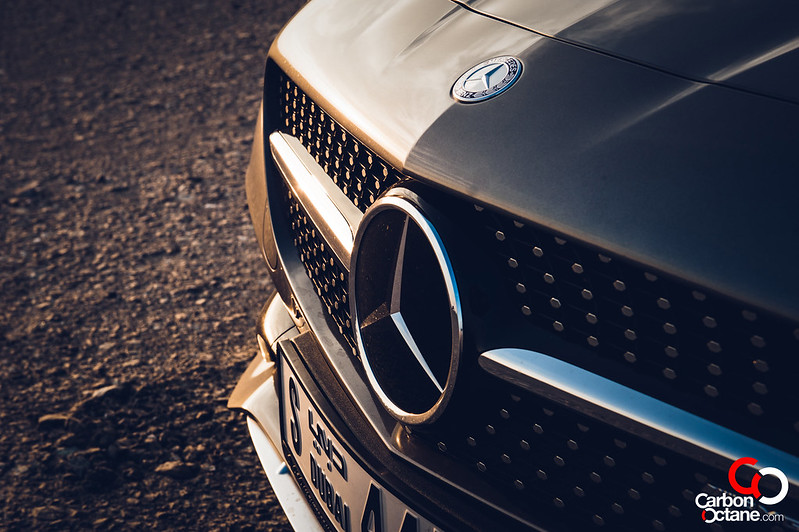 So what is it like to drive this mini AMG? It’s not as raw as the A45 AMG but then again we are not comparing similar segments. But it can change its character from Comfort to Sport and Sport Plus with the flick of a button. Pretty simple yes, but let’s just say that the setting to be locked in Sport mode at all times. This is where the force fed V6 comes alive and alert. The chassis remains very much similar to that of the previous SLK55 it replaces but the new combination of the all-new 9 speed auto with the V6 is rather special. Dynamically, the SLC43 AMG will not be able to spar with the Porsche 718 mid-engine layout but then again the SLC was never built to do that. It’s a compact sports tourer which can open its roof. 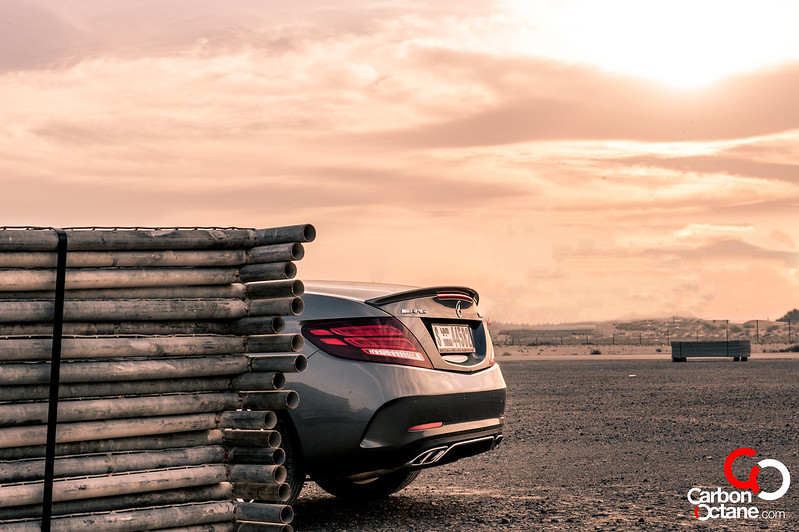 The response from the V6 is crisper and the power band rises with gusto as compared to the V8 and with the sensitive traction control off, you can have some serious fun. The switch to electronic steering system takes away the tactile feel but it’s the relation between the short wheel base and the suspension that really makes us able to plant the front end where we wanted to at all time. Push it into a corner, hard, and you would be instantly satisfied with the amount of mechanical grip and the fast switch over followed by a bit of tail wag upon hard acceleration out of the bed really stirs things up. 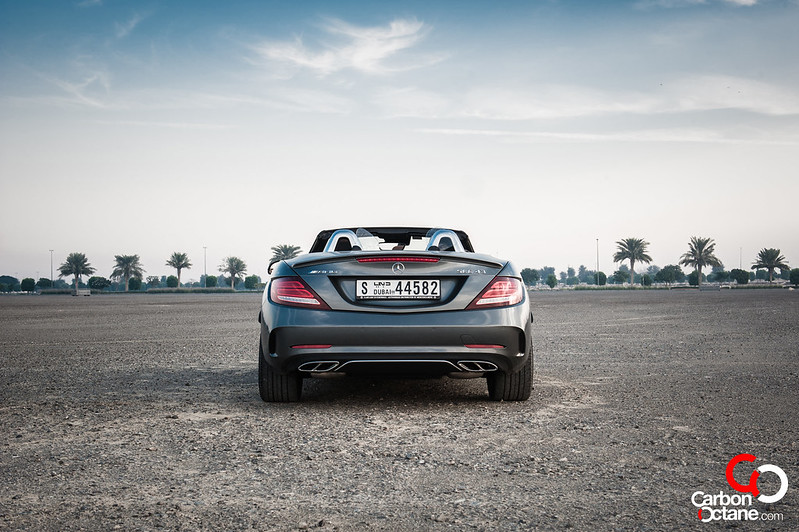 The SLC43 AMG with the new V6 in our opinion re-educates us that going smaller does not necessarily means taking away some of the fun factor. To add more character and ambiance of the driving, AMG true to its form has added subtle pop and crackle on the overruns. This symphony of sound and agility with the ability to drop down the roof is what driving is about. At the time we had our tester, the weather here was cool enough for us to enjoy the infinite head room. But experiencing it on a clear and crisp early morning on top of Jabel Jais Mountain, it’s a breath of fresh air. An air of you and the machine. The SLC43 AMG does have slight drawbacks, it’s not perfect as it can be but then again it’s not really an all new ground up re-design. On rougher roads in Dubai, which are actually hard to find, we felt that the SLC was nervous. 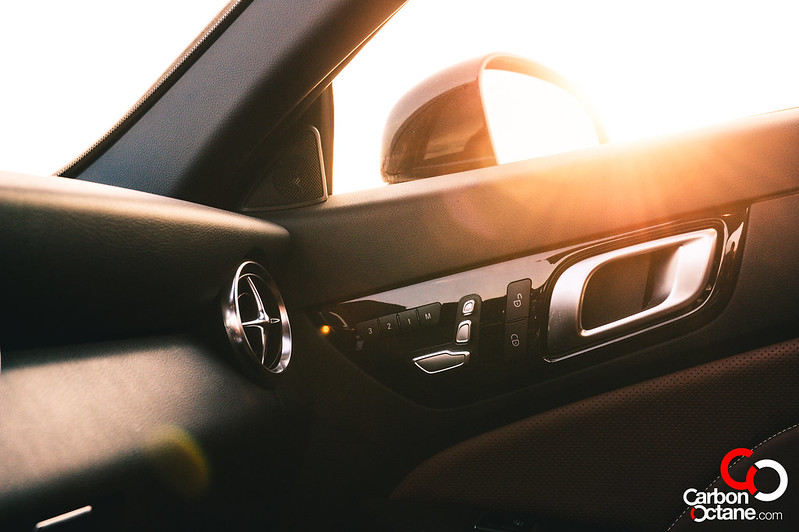 The interior is very welcoming and rather mimics that of it elder brother, the SL. We loved the gear stalk which is becoming extinct on the AMG models. The nappa leather on the seats which also blows warm air to our necks kept us nice and cozy in the mountains with the roof open. The media screen also gets bigger as a feature for the refreshed dash. But other than that, it’s basically the same inside as to the previous, Magic Roof included, which makes the glass opaque with the press of a button. 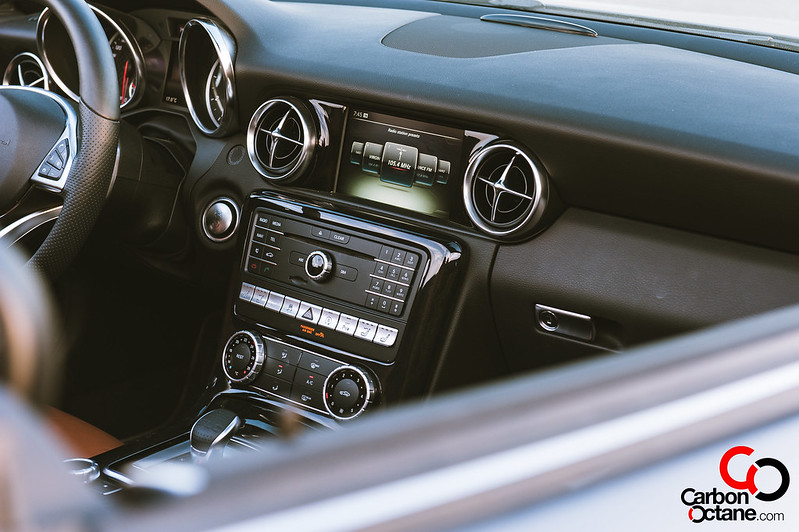 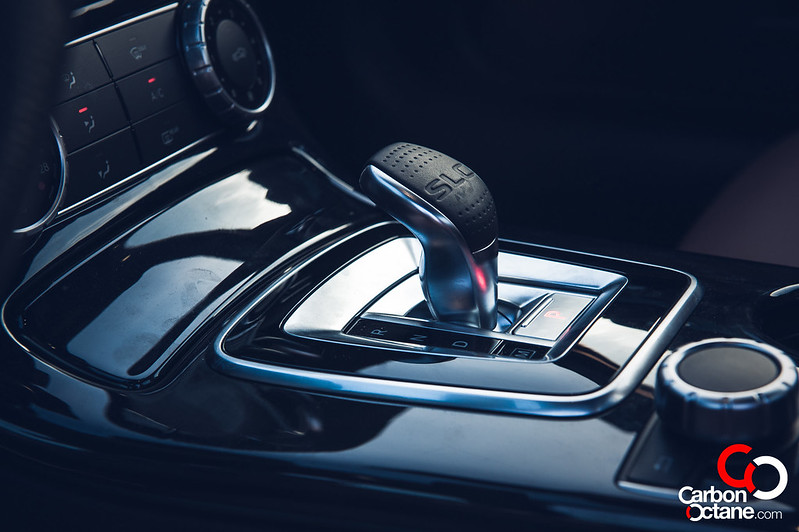 The SLC43 AMG is certain in the company of strong contenders. Ultimately the choice comes back to us as an individual. What are we looking for? Are we looking specifically for the brand or the way it drives? We always end up compromising one thing or the other. If you want a lively small hard-top convertible that can wiggle around and be docile enough to be a daily driver then this is a strong contender. It’s priced lower than Jaguar’s F-Type V6 and the 718 Boxter, so really can you fault anything at all in this? We suspect no. 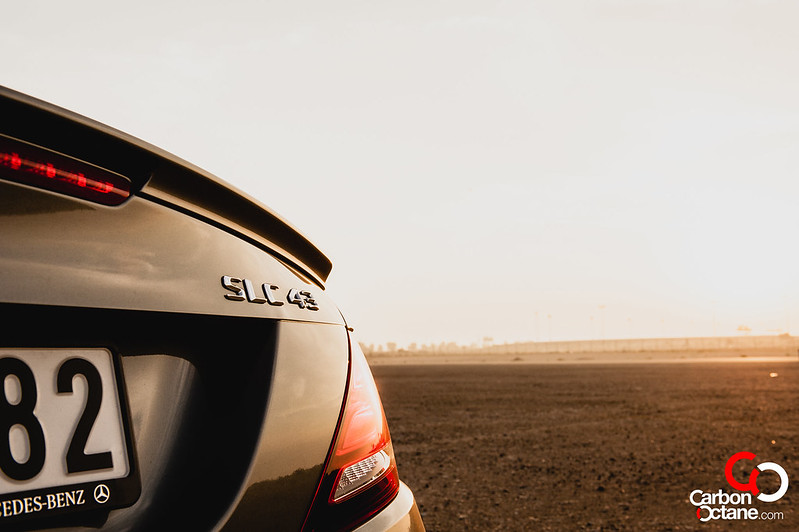