Nissan came out with a bang and introduced their NISMO line to the United Arab Emirates with three variants; the GT-R, 370 Z and the crowd favorite here, the Patrol. Did we need a Nismo variant for the Patrol? Why not!

The Nissan Patrol and the Toyota Land Cruiser are the people’s choice in the United Arab Emirates when it comes to family hauling and off-roading and both at the same time. It’s much like whether you are a Canon or a Nikon user in photography. These two warring factions are always on each other trying to be one up against the other. But whatever said and done, healthy competition has always been good for business. And competition leads to acknowledgement and respect. Whether you are a Land Cruiser believer or a Patrol, it is inevitable that you would be respecting each other. 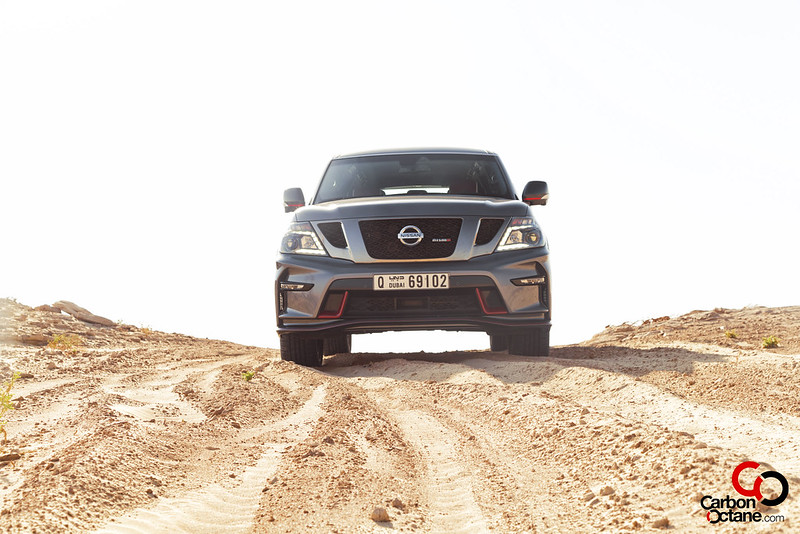 Having said that, Nissan has been budging its Motorsports Division, namely “NISMO” to create a NISMO tricked out version for almost all the variants they make. And as a result, we are quite fortunate to have a Nismo Patrol for the United Arab Emirates. The regular Patrol LE is a body-on-frame model that houses a 5.7L V8 and pushes 400 horses, which is more than the Hp figure of the Land Cruiser VXR but the Nismo Patrol pushes 28 horses more. Yes it doesn’t sound much as there has only been a 5% increase in power, but it’s how the power and the torque is distributed throughout the rev range that makes the difference. To aid the driving characteristics of the Nismo Patrol, Bilstein shocks goes around all the four wheels and the steering column has been sport tuned for a quicker turn in and better road handling characteristics. 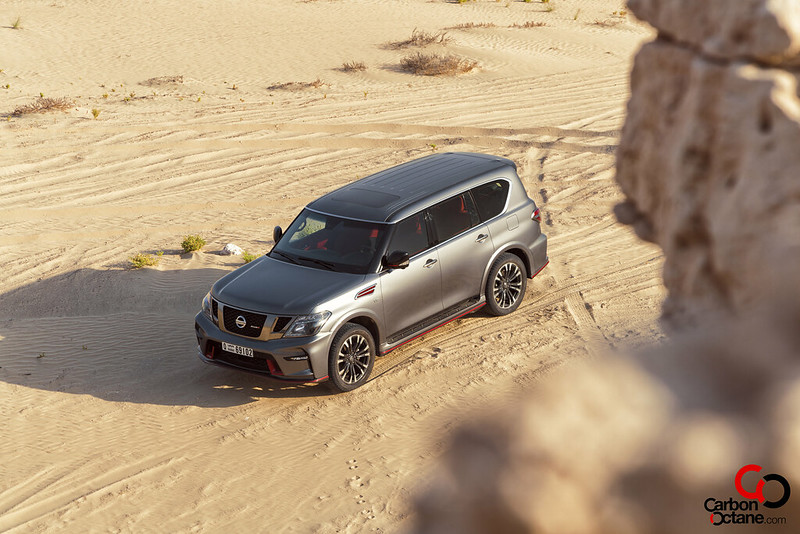 You need to understand the objective of the Nismo Patrol program, this exercise in a large format SUV is not to make it challenge a GTR, this is no Nissan Juke with a GT-R engine stuffed inside it. It’s an exercise by Nismo to create a more road focused four wheel drive that has the power and road handling characteristics to entertain the driver. If you are looking into an SUV with power and handling then the Range Rover Sport Supercharged or BMW’s X5 would be more in your line. But you need to have a second look at the psyche of the consumers in the United Arab Emirates or a change. The love of the Patrol is quite abundant, as you can see on the road. Next to you are driving to work or anywhere, just count the number of Patrols you get to see on the road. Quite a few I would assume. So, just like how BMW has their “M division and Mercedes-Benz has their “AMG” division, Nissan has also brought their Nismo line to satisfy the needs of the consumers. 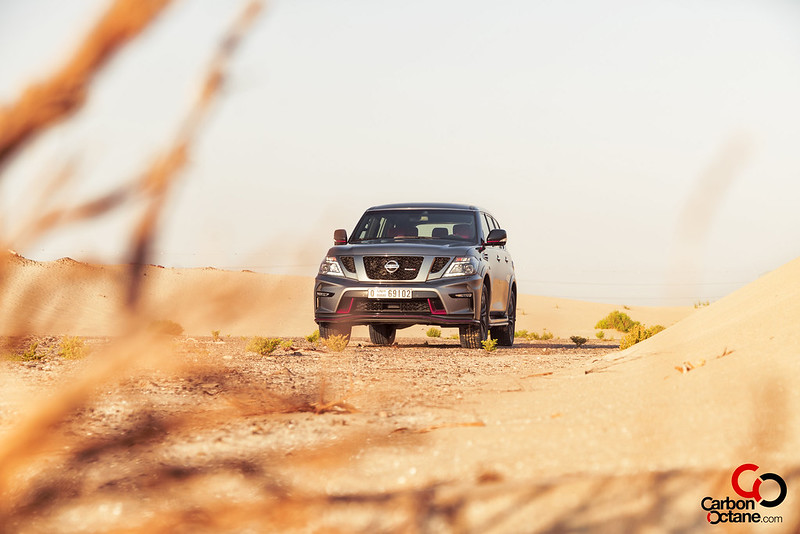 The NisMO Patrol comes in three exterior colors, White, Black and dark Grey. Our tester was dark Grey, which is quite uncommon, and came with red leather diamond stitched interior. Wood trim on the Nismo version came in a dark tone as compared to the SE and the LE range which created a darker mood inside and the steering had alcantara lining to give it a sportier element of touch. Everything else is left the same. Outside, the bumper gets Nismo’s considerable hours at the wind tunnel treatment with huge intakes and vertical grills. The rim size increases to 22 inches and are Ray allow wheels, more capable for on road handling than off road prowess, a diffuser at the back and dual exhaust tips. Oh and not to forget a Nismo badge, to tell it apart from the regular Patrols. 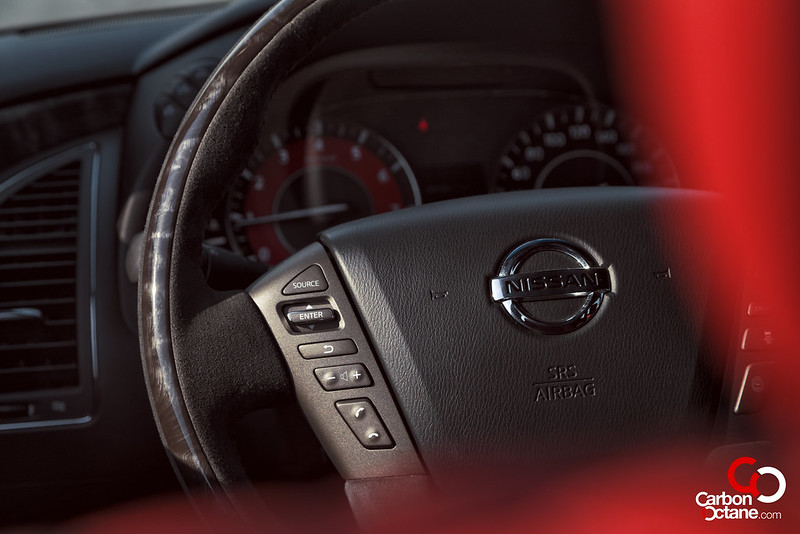 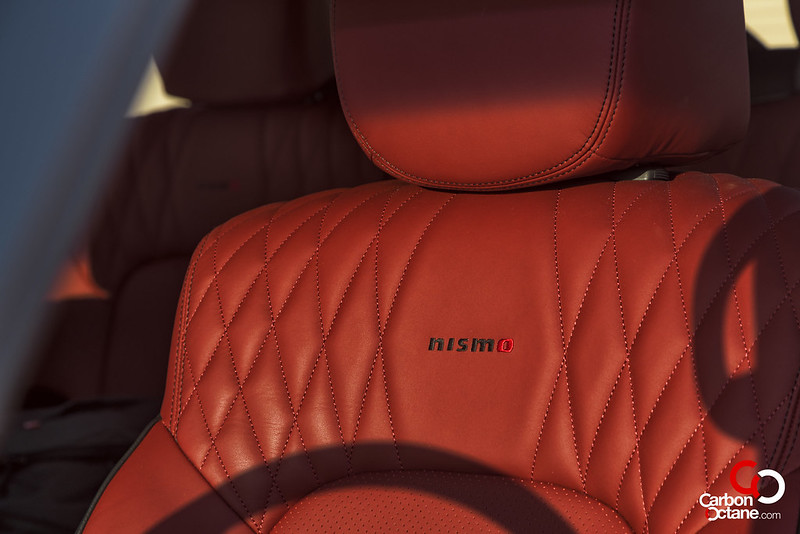 Nissan has taken the bold step of getting this tricked out version of the Patrol. We, as the consumer, gets more of a choice. We can go for the basic SE, or load it up with the phenomenon LE and now for the first time ever go beyond and be unique and opt for the Nismo version. The cult status Nissan enjoys for the Patrol is quite uncanny. And from the looks of things, they have made the right decision in getting the Nismo Patrol here in the United Arab Emirates. 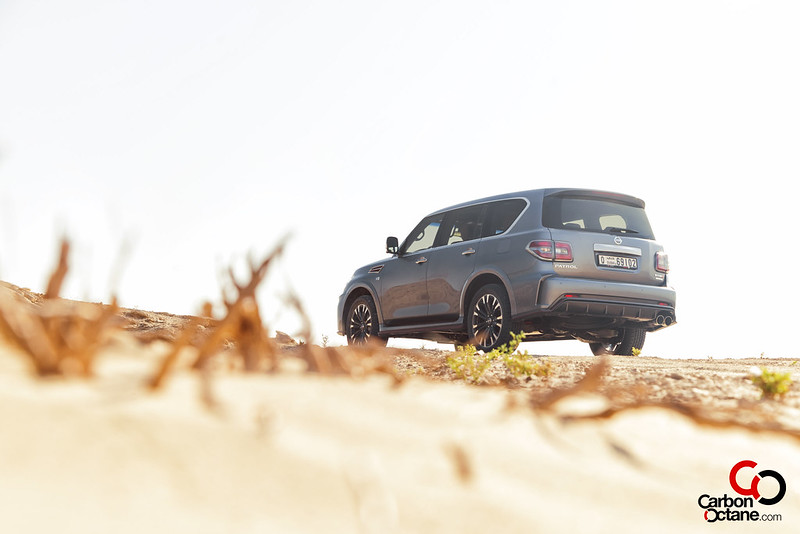 The Patrol Nismo is available now at Arabian Automobiles, the official dealer for Nissan in Dubai, Sharjah and the Northern Emirates.