The 9th generation Accord has finally hit the market and albeit that it is a mid-season facelift, it does have a few tricks in its arsenal to make it a serious contender in a segment that included market staples like the Toyota Camry and the Nissan Altima. This segment of mid-sized vehicles are getting new entrants like the French invasion by the Renault Talisman, a family car that gives European passport along with self-parking. None of the Japanese trio aids in parking other than having the customary reverse guide lines but should the Accord be worried?

We don’t think so. The Honda Accord has been dominating its segment with the Toyota Camry for decades. First launched in 1976, well before most of our readers were born, the Accord has carved its niche on reliability, affordability, practicality and safety. The dominance on Honda’s in North America is mind boggling. And it should be, Honda’s are practical, reliable, comfortable and holds it resale value.

In UAE, the Accord had to fight its way through the likes of the Nissan Altima and the Hyundai Sonata primarily because of its elevated price. We have for the time being not considered the Camry since we don’t see much in private hands since the RTA has made it their de-facto mass transporter.  Our testers came in two variants. The Accord V6 Sport and the 2.4 Liter Accord. 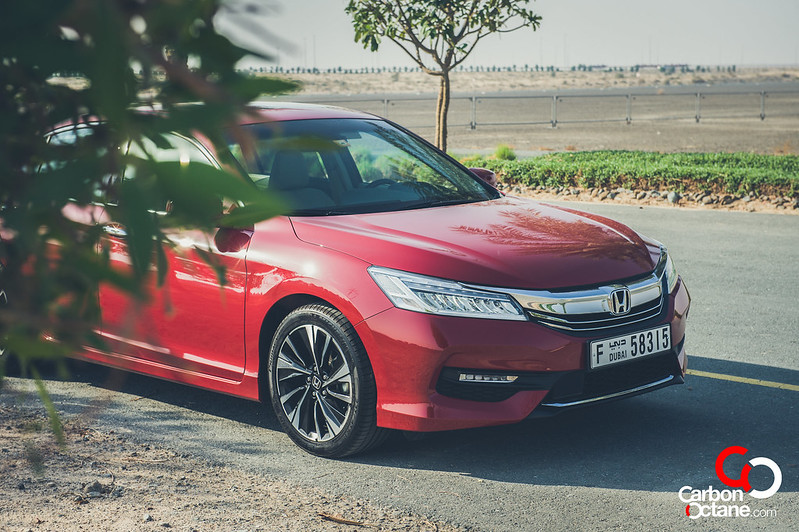 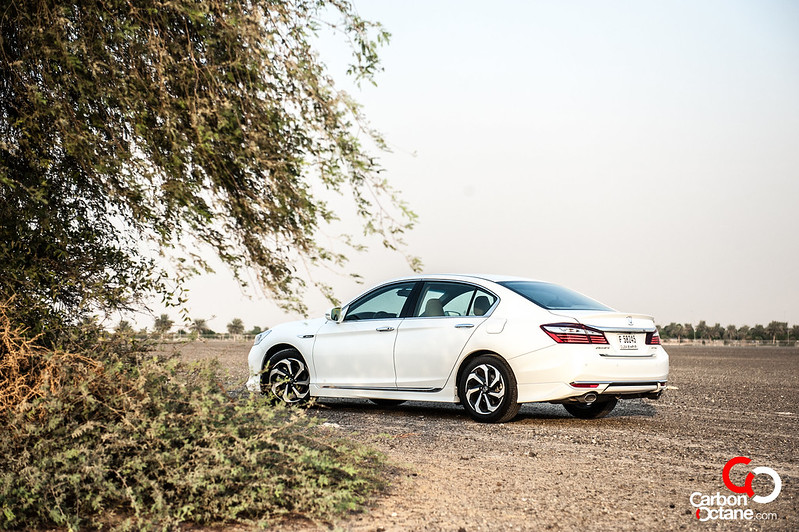 The Accord V6 Sport features a 3.5 Liter V6 good for 278 horses and a respectable 0-100kmph in 7.5 seconds, and to top it all it uses a 6 speed traditional automatic transmission unlike that of the Nissan Maxima which uses a CVT. Don’t get us wrong, we love the Maxima and its second generation CVT that kinda mimics an automatic transmission changes but there’s something about having a regular automatic gearbox for the V6. Yes, when it comes to inline 4’s and fuel economy is the mindset for which we can somewhat justify a CVT but a V6 was supposed to be more power and fun oriented right? 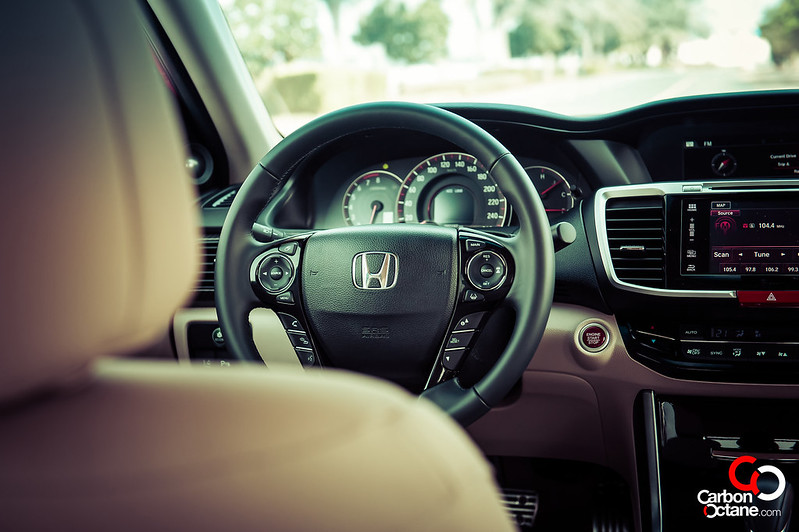 Our Accord V6 Sport came in San Marino Red drapes, a unique color that is reserved for their V6 line and the 4 banger came in white with Honda accessories. We loved the new front grill which is reminiscent of the new Honda Civic which was launched earlier, less chrome compared to the previous model. The V6 variant also came in all LED headlamps which is always nice. You have a sense of newness in line with what cars above their grade comes with. 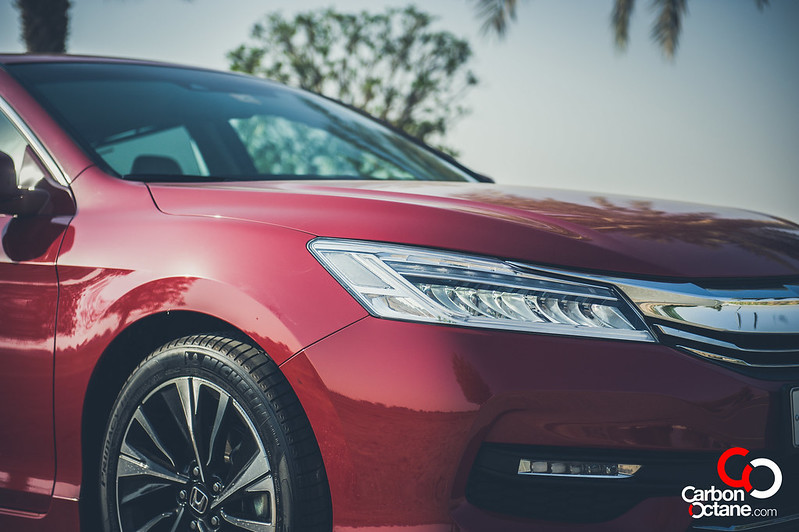 But the single most important feature that blew our mind on the V6 was Honda’s lane keep assist which works in conjunction with their cruise control. Honda engineers and software developers have cracked the balance of keeping the car in the center of the lane while the land is changing its direction. The car was not bouncing between the lines in order to keep itself in the track. Our drive through Sheikh Zayed Road from the first interchange till the 6th was a hands off affair. 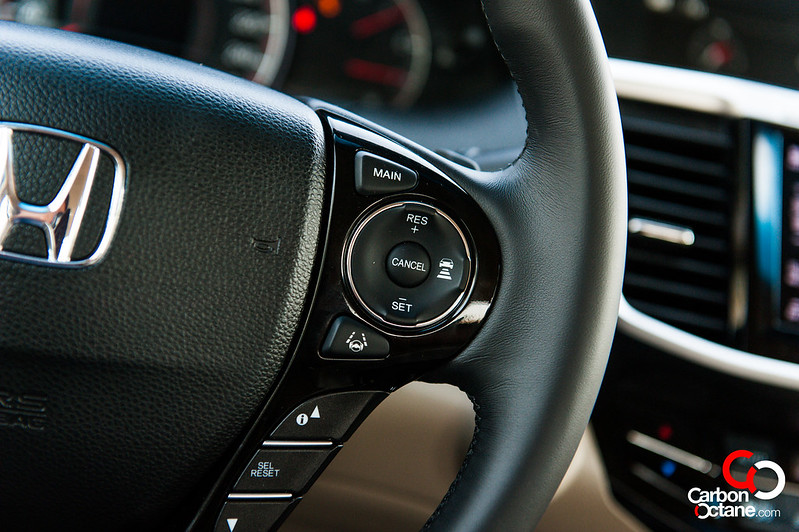 We did have to place our hand on the steering wheel but that’s just because the car prompt us to do so. In terms of power, the V6 is ideal for about any road situations we face on our daily drive routine. The gearbox is intelligent enough to downshift fast and right to the correct gear while initiating an overtake and the delivery of power was linear, something that is a trademark of a perfectly sorted out car. Honda’s Earth Dreams technology is one of the best we have experienced. The V6 engine gave us a combines fuel average of 8.1L/100kms while the 4 cylinder variant gave us a very eco-friendly 7.1L/100kms, the latter being at par of a Toyota Yaris which we had tested at the beginning of the year. 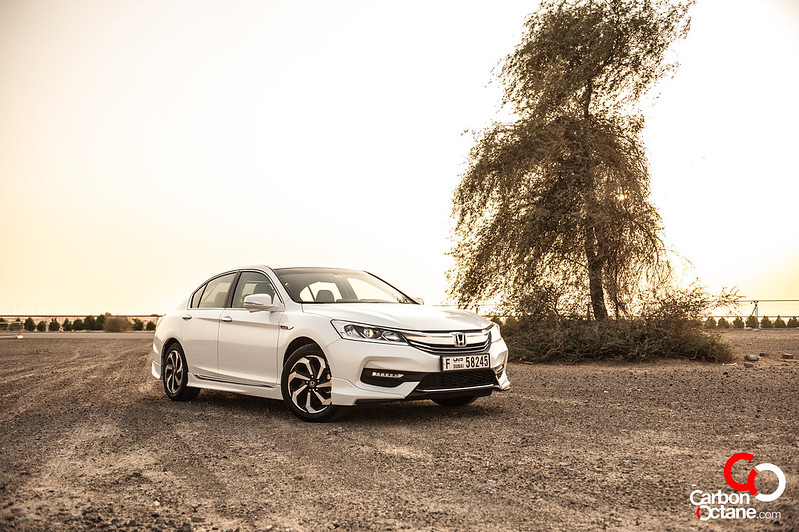 So what does the two variants of the Accord tell us? First of all, yes they have updated the internals to give a more direct drive and road holding abilities but tweaking bits and bobs around the suspension. But it’s their ride comfort that really sets it apart from its competitors. Smooth and silk is what the ride is all about, it’s not meant to be man handled around the bends but that what we need and do 90% of the time on the road. Don’t we need a no nonsense car that devoid us of road imperfections while creating a serene and a quiet ride? I think that’s what we need for our daily beaters. And with Honda’s engine building acumen, we know that they are bullet proof and would last hundreds of thousands of worry-free driving. 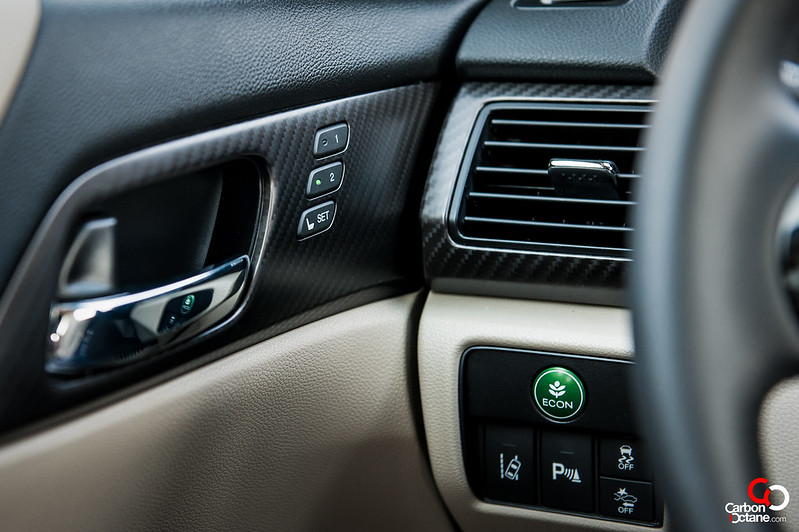 When it comes to sensible mid-sized family sedan these days it’s hard to beat the package and the embrace of the Accord. Whether you end up buying the V6 because of its extra oomph or the eco-friendlier four cylinder variant that would give you close to 800kms on a full tank of gas, the Accord remains the quintessential smarter choice for the average Joe. 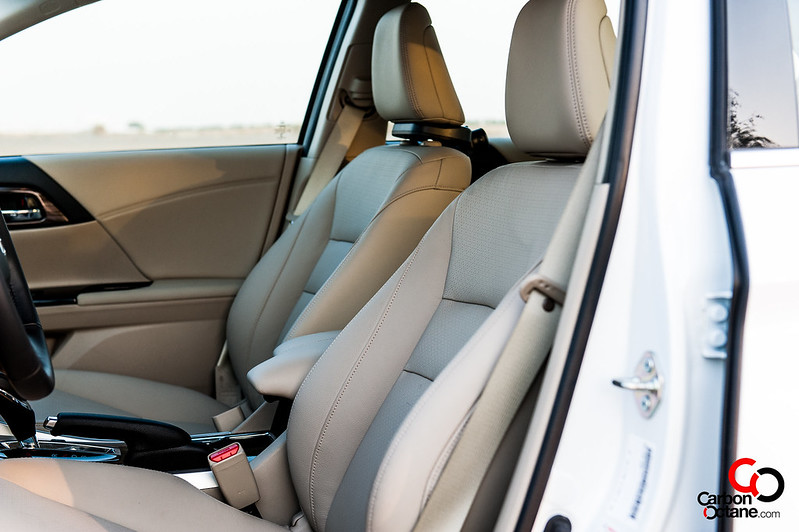 Being in one of the most competitive segment where customer loyalty is key in retainership of the brand it is easy to lose ones way. Yes, we would have loved having vented seats which comes with the new Renault Talisman but then again, Honda comes with auto-start now a days and that is god-sent for the summers we have here. It’s a welcome gift for anyone who has experienced the heat first hand while getting into their car which had been baking under the sun for hours. Auto start would flush out the hot air and cool down the car to a manageable temperature in time for the departure. 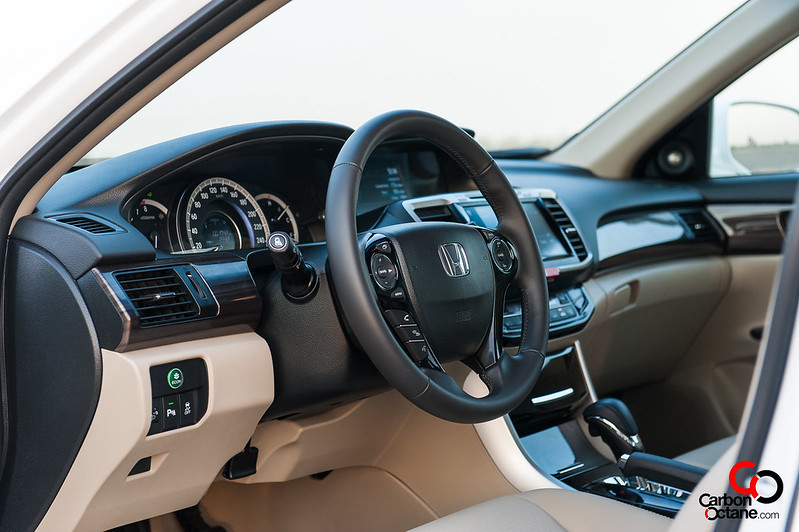 Well done you lovely people at Honda for keeping the Accord as we have loved through the decades.