A while back we had tested the 2016 Honda Civic RS and the 2.0L and loved the ride and the build quality. Yes, now with CVT we lost the oomph of the V-TECH rush and a few purists would be complaining but the majority of new buyers would absolutely love the new looks, and its feel. And it has been just that, Honda in Dubai and in the region has been selling the new Civic’s like hot cakes. Our 2.0L Civic came with a price tag of AED 78,900 which is a lot of money but once you quantify on what you’re getting you do feel satisfied. Now to sweeten the deal and make the Civic more approachable, there’s a new 1.6L version. We find out the newest entry-level Civic.

So here’s the deal. New to the fleet of the Civics, we now get their new 1.6L naturally aspirated CVT which is good for 123 horses and 151 Nm of torque, that’s 35 Hp & 36 Nm down from the 2.0L variant but at AED 69,900 it’s also AED 9,000 cheaper if you opt for the LX trim as tested and there’s another trim lower called the DX which would save you an additional two grand from the 2.0L variant. At first look the LX trim looks identical to that of the 2.0L variant, it’s only when you step inside do you see the center screen to be smaller, and that’s about it. In that way this is a bargain. Honda has made the LX 1.6L more accessible to the public while the DX trim is primarily aimed for fleet sales. 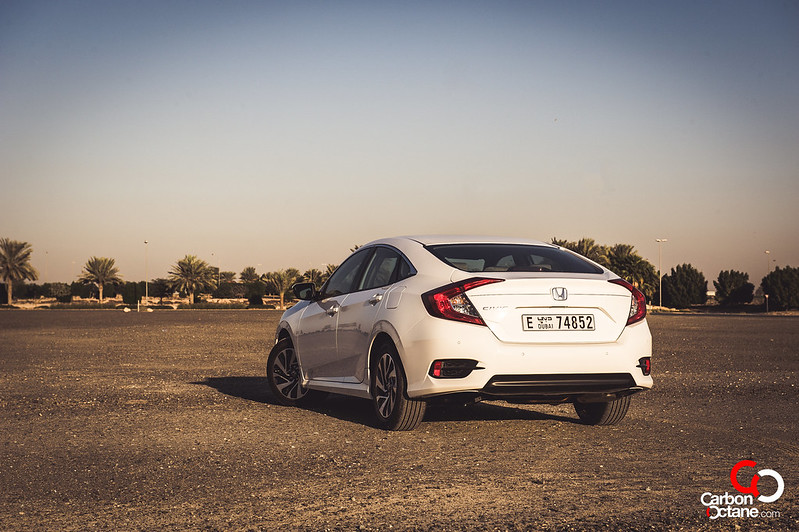 The Civic 1.6L LX retains the same cushy ride as the other Civics and you get a supple leather trim on the steering wheel, very much similar in feel to that of the Golf GTI. The seats are the same and other than a basic smaller screen which just shows the radio presets and time, everything else is the same. 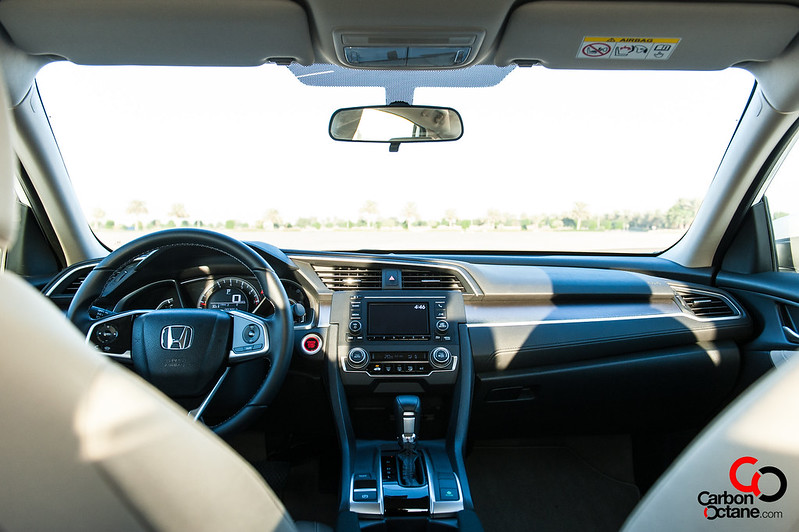 Now we can come to the bigger question, would you buy the Civic LX over the Civic 2.0L, does the AED 9,000 surcharge on getting a bigger engine matter on a small sedan when you are really interested in just reliability and low cost of maintenance? We are struggling on this main topic and have been banging our heads. Yes, the 2.0L does give you a slight oomph on the go but that’s about it. The drive and feel of the LX, as tested, has been very similar. We have covered over 800 kms and averaged 6.6L/100kms, that’s 0.2L/100KMS more that the Ford Figo, which in 2016 has given us the best mileage. Well no, the Toyota Prius gave us the best mileage but then again the Prius is a hybrid and costs close to AED 100K. 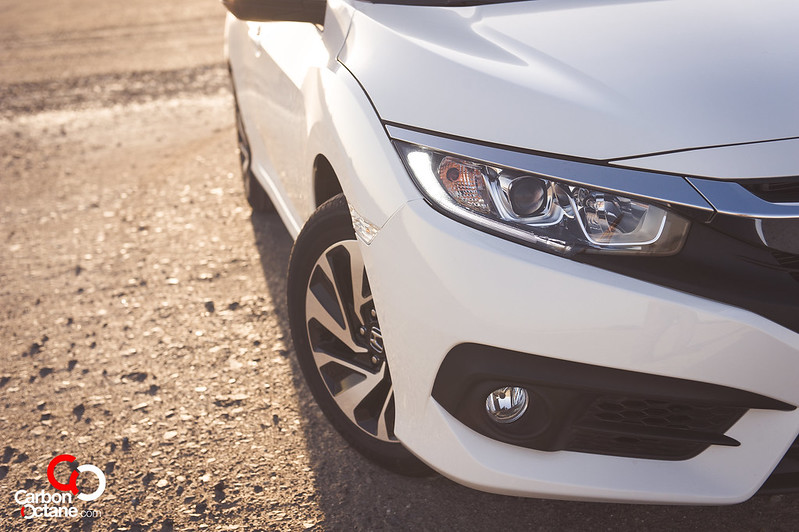 A full tank of gas costs AED 62 so that’s good, light on the wallets. But frankly speaking there is no reason not to buy the LX trim. It’s actually a matter of preference. Both the 1.6L and the 2.0L variant are superb everyday vehicles. And to answer my question whether I would buy the 1.6L, yes, in a heart-beat. For every-day running around I don’t really see the need for having a bigger engine, the 1.6L pulls more or less in the same manner mainly due to the nature of its CVT transmission. The cabin is quiet, the engine is smooth and does not buzz, and the leather steering wheel is a delight to hold on to. What more would you need? 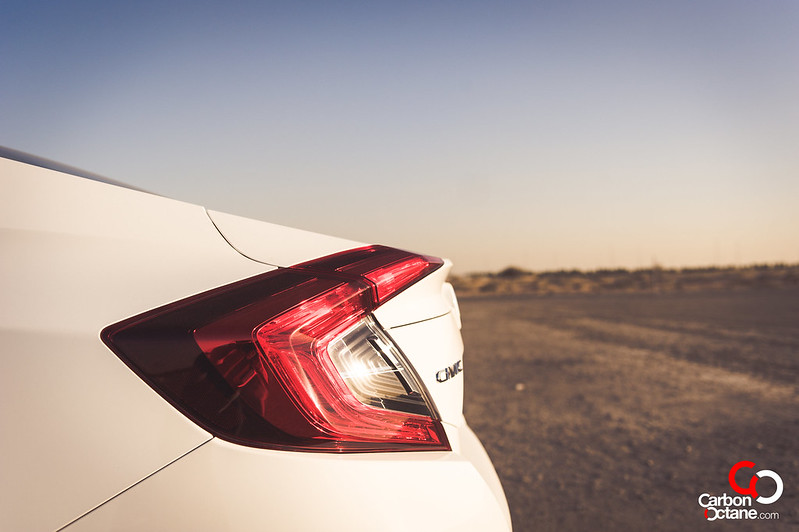 A lot can be said about the new Civics and now the same makers are spoiling the customers with choices in trims and engine. For people on a budget but who also appreciate the finer things, we believe that it’s hard to beat a Civic, especially the 1.6L LX. It also comes with remote start, very handy in the summer. 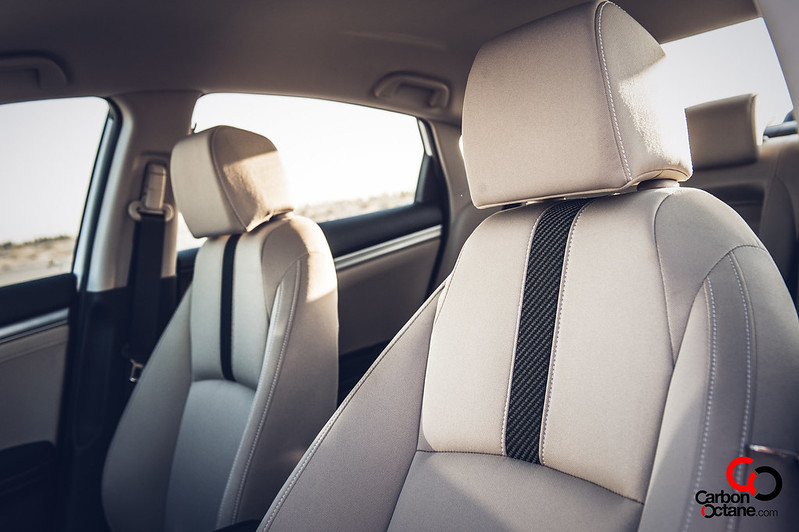 There you go, the 1.6L LX is Honda’s answer to practicality, affordability and loyalty to its customer fan base. And it’s a great car. 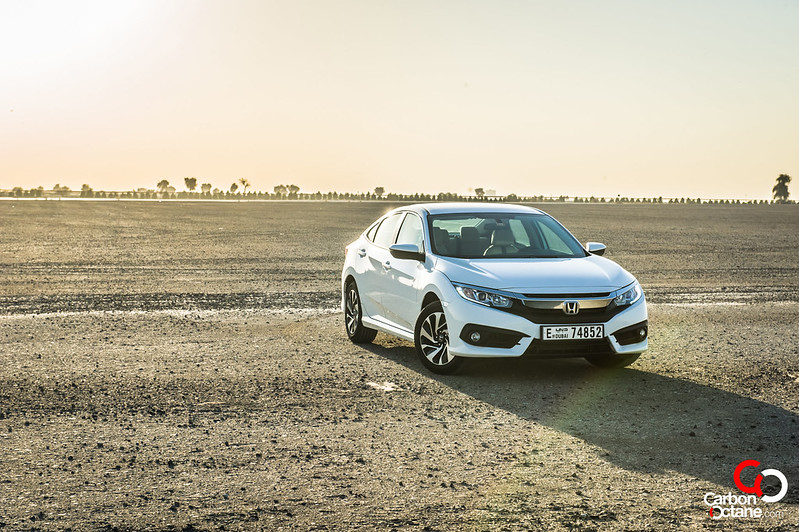