We live in very interesting times. Times when car manufacturers are building hybrids and pure electrics as well as shocking us with pleasure and wet dreams with artistry in the likes of the Pagani Huayra. Then there is Nissan and its Patrol Pick-Up. A true time tested, no nonsense, cut out the BS; workman’s tool. It could be compared to what a tractor means to a farmer, a means of earning and providing for the family. A simple work tool, with no more electronics than a hand saw, and it cuts a deep impression in automotive culture. 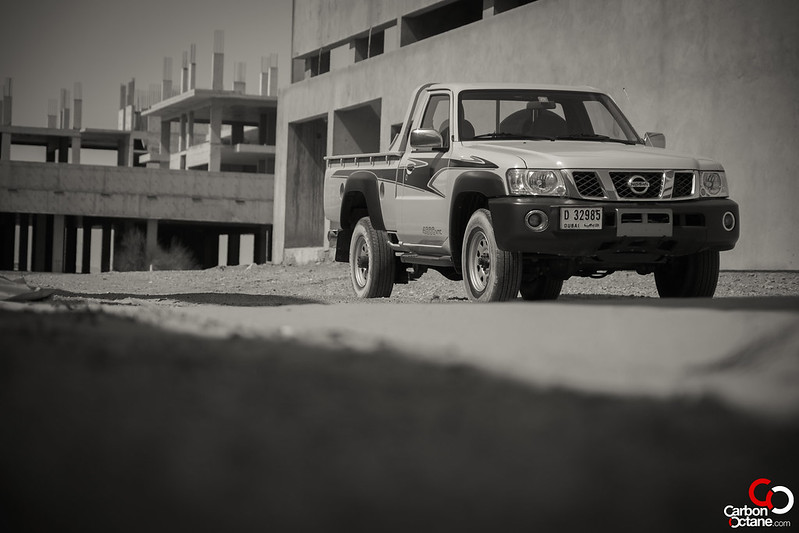 Nissan’s Patrol Pick-Up carries the same resonance here in the Middle East, as Ford’s F150 of the 90’s in America. The Patrol Pick-Up’s interior is spartan with only Air Conditioning and rake adjusted steering column for amenities.  Our tester came in with a CD player; somehow that seems a bit redundant as I don’t use CD players anymore. 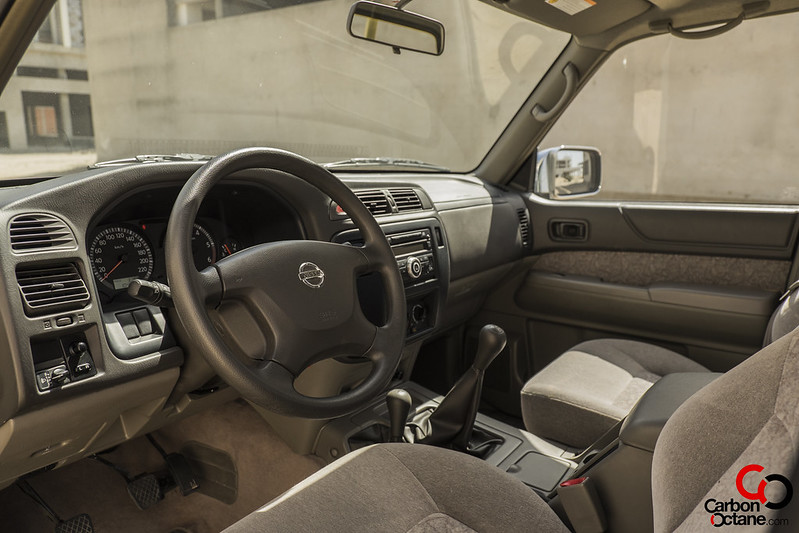 Nissan and Toyota are the only Japanese manufacturers to have sent these pick-ups with a large engine. The market now a days are flooded with sub 3L inline 4’s but it’s these 6 cylinders which packs in the punch and can go pretty much anywhere off the beaten road.

The Nissan Patrol Pick-Up brings back images of my younger days. It has played many roles in the local culture. It can be seen carrying camels and people to powering up huge dunes which is a local pass time. Drifting is a favourite on these and can be seen participating in local drifting sessions around the Emirates and not to mention its presence on the road at the UAE National day, from doing burnouts to bouncing the rev limiter. Life’s tough for this gladiator but it has earned its place well into the minds, customs and local folk lore. 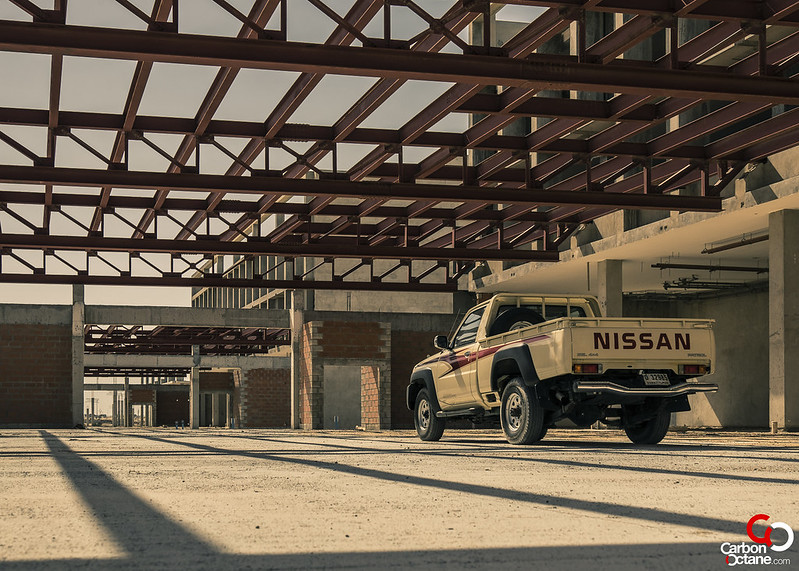 I always wanted to have a drive in it and was quite fortunate when Nissan actually gave me the keys to the Patrol Pick-Up. The familiarity of the controls made me feel right at home the instant I stepped inside its cabin. The Pick-Up retains its retro macho look and should be called the “Field Marshall of the Desert” because of its ability to lead. The ladder frame chassis coupled to 3-link coil sprung front end and a leaf sprung rear end makes driving on the roads a bit challenging. The lack of weight at the rear makes the car bounce around and required effort to keep it following a straight route with excessive play around the centre of the steering wheel. But then again the flat bed was meant to carry loads at all times. 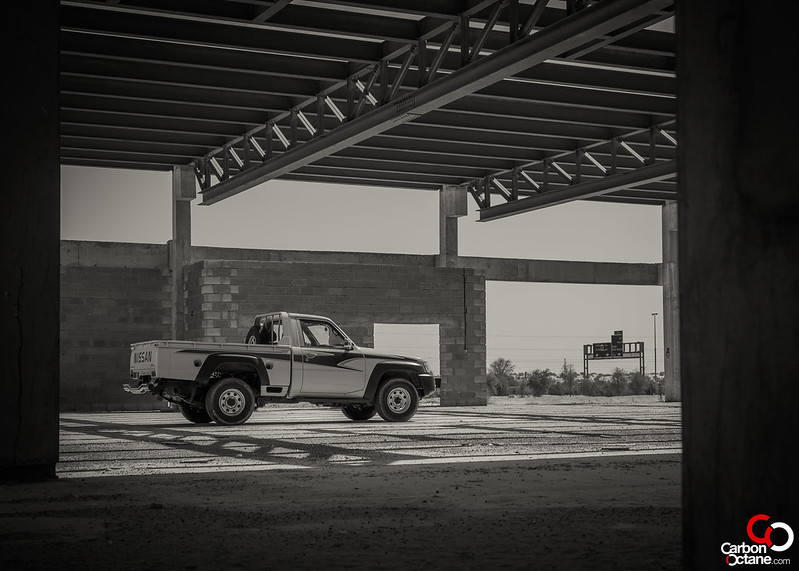 Driving the Patrol around the weekend was shall I say in lack of a better word, memorable. People gave it thumbs up and at signal lights, would roll down their windows and try and grab my attention. Parking it next to my favorite coffee shop on beach road, I could see how much of a cultural impact it had in this region. People walking by would slow down and have a glance at it. People would point towards it and probably share fond memories of it, most of them were locals. My earliest memory was the one we had at our company and it would carry workmen and gear and travel deep into the desert to Etisalat’s GSM towers and work on the generators powering them. They never had an issue in getting stuck or engine and/or auxiliaries failure. It was a faithful companion. The AC’s worked better than a freezer and the car never overheated. These are the qualities of dependability and that’s something valued here, it brings brand loyalty to the level of fanaticism. 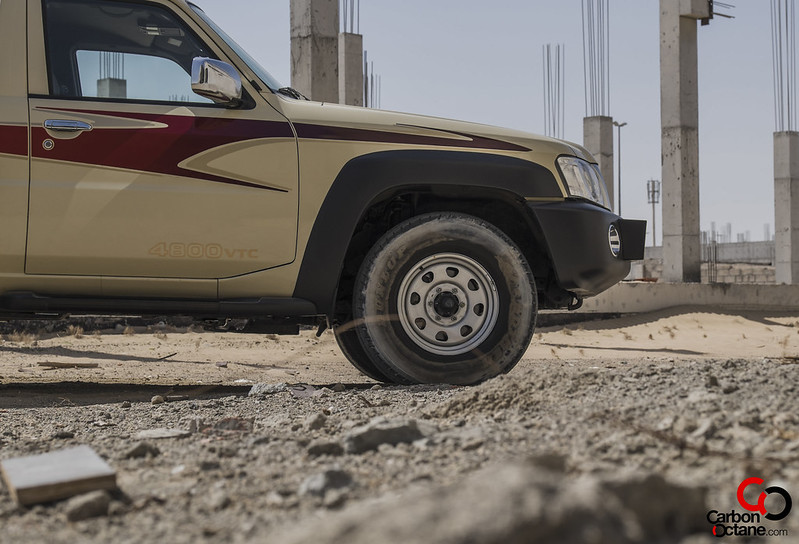 Trucks these days are as comfortable as SUV’s, take the Denali truck and the SUV for example. They have the same options and feels almost the same to drive. The new F150 V8’s are fast, handles well as an SUV and the same goes for the GMC Silverado. This jump in perception of a pick-up/truck has been relatively new in the region. But you don’t see these out in the desert much. Chances are that the Nissan Patrol Pick-Up is the one climbing dunes on the weekends and being a constant fixture to desert sleep-overs. 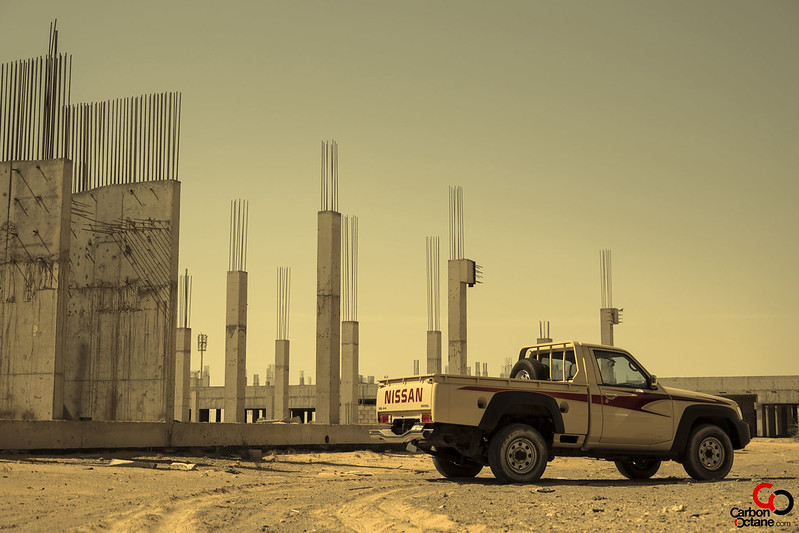 My tenure with the Patrol Pick-Up has been a trip down memory lane and a pleasant departure of driving dynamics from today’s modern cars. It’s age defying dynamics and capabilities are still relevant today as it was when it was introduced. 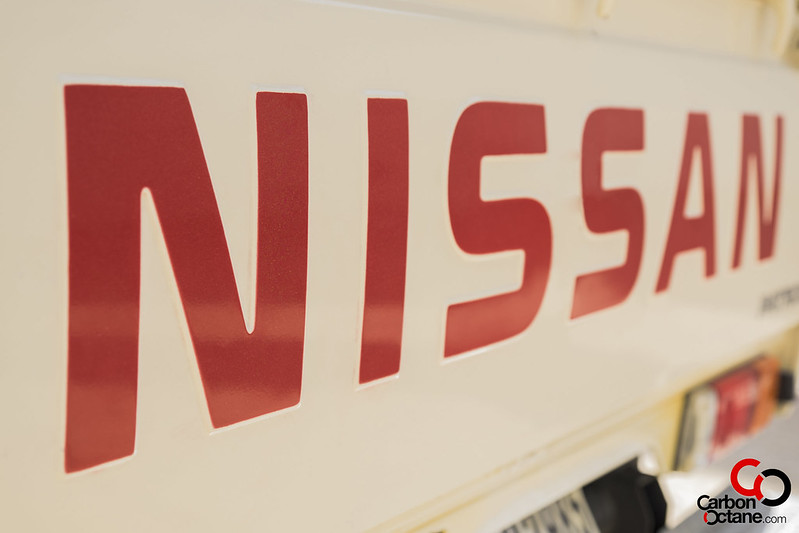