My history with Infiniti started back in 2007 when a close friend picked up his G35 Sedan. By then it was already known as the Nissan Skyline in Japan and any car carrying the “Skyline” badge was going to excite people around. The sporty RWD Infiniti G35 was a blast to drive, the engine felt strong and best of all, its traction control allowed for some play before activating leaving room for much fun. The G35 was soon followed by a refreshed design and an updated engine, the 3.7 litre G37. The G37 sedan is part of the CarbonOctane fleet and is owned by Brian. It has accompanied us in many shoots and still brings a smile on our faces. The paddle shifters are a direct bolt on from the Godzilla, the suspension is comfortable with feel and the gear changes crisp. So how does the renamed G37 feel. Infiniti has changed their naming process and the Q50S, which is basically a sportier version of the Q50, comes with an all new body albeit its power remains relatively unchanged. We will find out how it lives up to the G37 and if it has what it takes in surpassing its predecessor.

The 2014 Infiniti Q50S entered our fleet just before the weekend and we were excited for an industry first mass produced and a genuine fly-by-wire steering system. Yes, there are no physical link from the steering to the front wheels, and the old school hydraulic system has been replaced all together. There are sensors which basically monitors how much the steering wheel has been tuned and then does massive calculations and turns the wheels according to speed of travel. There are two more sensors on standby in case the first one fails, and if for any reason the third sensor should fail then a physical linkage would connect allowing for a seamless driving experience. The driver would not even know other than some lights flashing on the dashboard, that anything was wrong. But as an automotive tester, I was more interested in understanding how it felt. 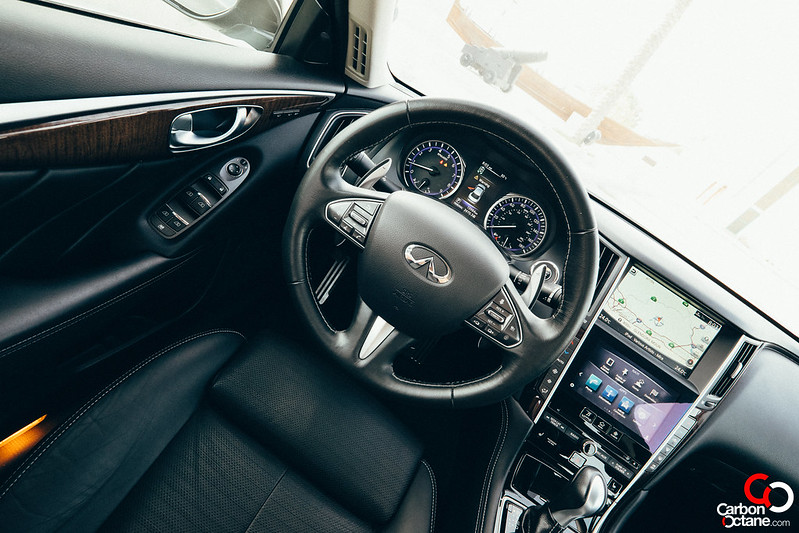 The steering resistance is dependent on the vehicle’s speed, the faster you go the more resistance it has in directional changes, a safety aspect found even with the older Infinit’s but now we have an option to selectively set on comfort mode of the steering with any driving dynamics of the vehicle. By default, the “Sport” mode on the ECU now not only changes the car’s driving characteristics but also firms up the steering further from being on “Normal” or “ECO” mode. It’s new for a Japanese marque and we did like to keep the Sport mode on with the steering set to comfort.

So how does the steering feel? Driving the G37 and the Q50S back to back it becomes quite clear that the G37 does have the feel of connectivity to the road which the Q50S lacks. The changes are subtle on normal cruising around town but once the interchanges are attacked or tight corners negotiated the absence of feel on the Q50S becomes quite apparent. This is not a bad thing, because we got used to it fast. Many German manufacturers have already moved away from the hydraulic steering system to an electric one, while sacrificing feel. What the Q50S lacks in feel it gives back in turning in capabilities. The steering response is fast and the car turns as if it knows what we were thinking. This response was something we had only experienced in cars that cost 10 times more, well in short super cars. The “S” has a bit of trickery under its sleeve, not only it wears low profile 20 inch tires over the non “S” models, but the extra grip beautifully accentuates the now almost telemetry like steering response. 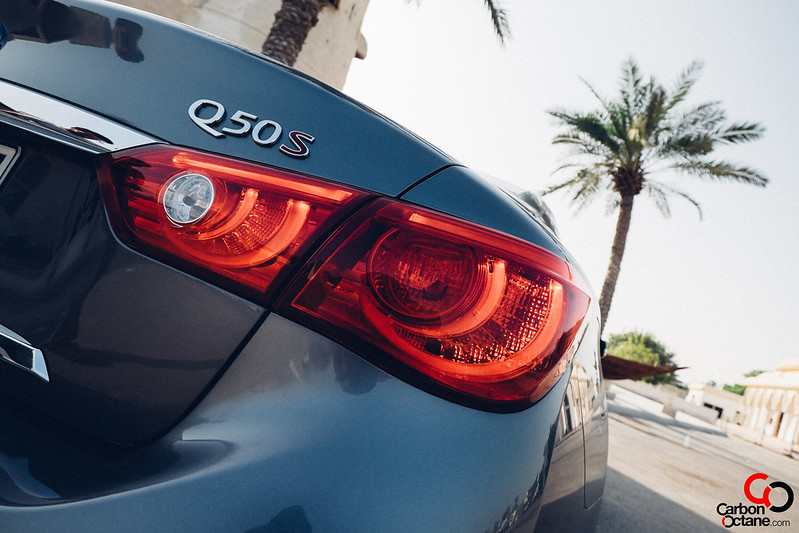