HomeReviewsMercedes-Benz A45 AMG and A250 Review

The hot hatch market is definitely the talk of the motoring industry and though this concept has been widely popular in Europe, it had not filtered down to the Middle East much. In this region it has always been about the number of cylinders and size and most importantly; it was all about horsepower. Now the turbo charged 4 bangers from the A250 Sport and the A45 AMG makes 211hp and 360hp respectively. Just to put things into perspective the A250 turns out more horses than the Toyota 86 and close to the new Golf GTI whereas the A45 AMG with 360hp is just mind-boggling. That’s more power than the E46 M3, from a 2 Liter turbo-charged engine. How is it possible? It is now!!

Mercedes-Benz A45 AMG and A250 Review

The boys from Affalterbach have somehow been able to extract 360 horses from a 2.0 Liter engine by a twin-scroll turbocharger, forged pistons and crankshaft. At 181hp per liter, the A45 AMG carries the most punch per any qualitative unit you may think of. I’m sure the engine department of AMG wanted to send a “shock and awe” message to its competition. After all this is the first time (as far as I know) that AMG has worked on a four-cylinder engine and they needed to create the loudest statement possible. 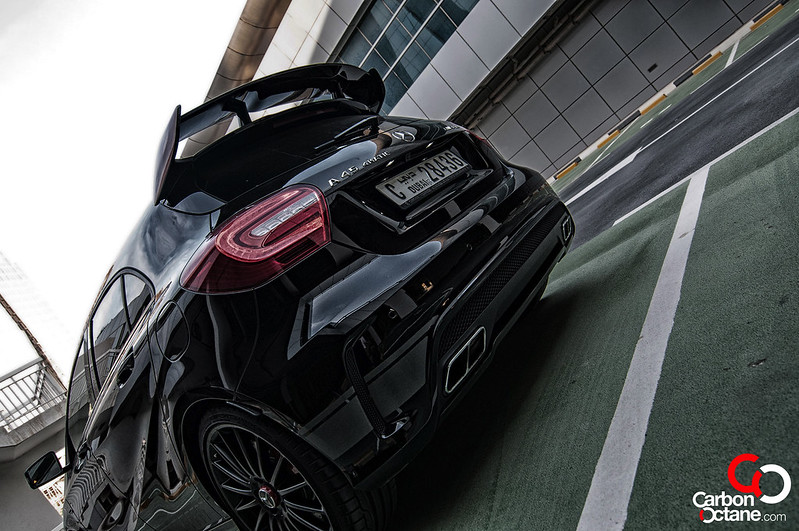 Loudest statement, yes, wait till you hear the exhaust note on the A45 AMG and you might swear that there are more than 4 cylinders in the engine playing around. True to their form, AMG has created a crackle of an exhaust note. Apart from its big-bang approach towards the performance and sound department, the visual treatments reminds us of cars designed for the Pikes Peak challenge. There are fins attached to the front bumper and a rear wing up on the back. If truly there was a car that would send flashbacks of motoring engagement before even stepping into it, then the A45 AMG wins it hands down. 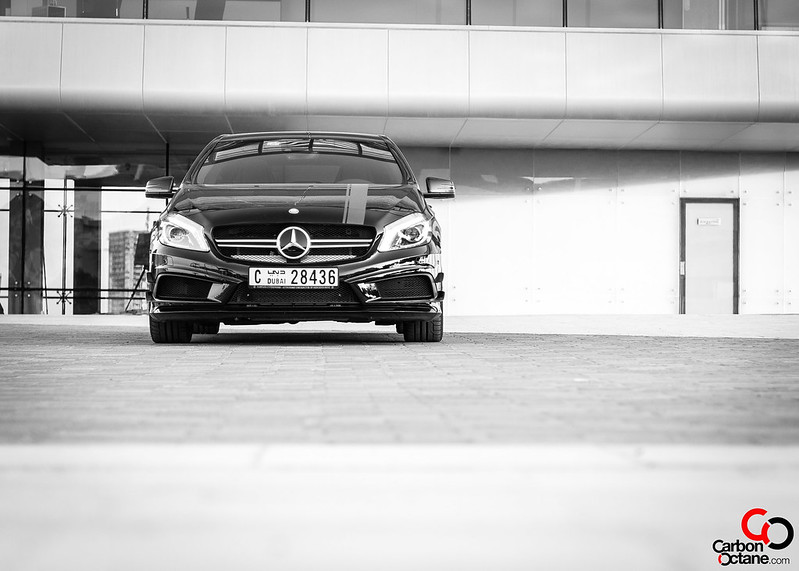 How does the two variants of the A Series from Mercedes-Benz stack up against the competition. The A250 which is also powered by the same 2.0 Liter turbocharged (minus the engine goodies from AMG) is more akin to the Volkswagen Golf GTI, a formidable shoe to emulate let alone to surpass. Then there would be the Opel Astra OPC and the Ford Focus ST. These four are all front wheel drive hot-hatches while the power ranges from 211hp to the range topping Astra OPC with nearly 280hp. For this article I would just pick on the Golf GTI, I believe that the A250 would have to be at par with the GTI in order to gain any merit badges amongst the massive GTI followers and also in attracting a younger generation of consumers towards their brand. The A45 AMG is a completely different ball game, we believe that it stands alone, until we get our hands on the new Mark 7 Golf R which is an AWD (All Wheel drive) and boasts close to 300hp. Yes that would be a more realistic match for the A45 AMG, then again we are hearing that the Golf R 400 is around the corner. Interesting times indeed. 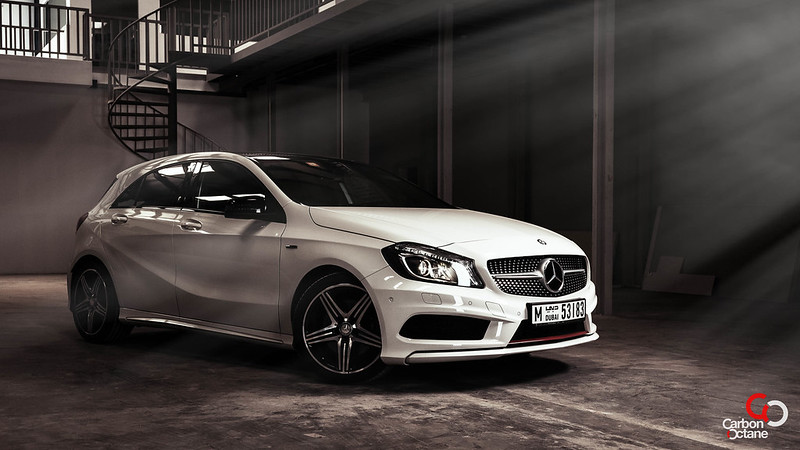 We will start off with the A250 Sport. The first thing one would notice is that is has a rather unconventional grill; they look as if studded with diamonds. Yes it does not feel too masculine to look at but the rest of the cars proportions are rather fit for a hot hatch. It actually looks smaller than the GTI but they are about the same size. Inside it’s all new in the design department from Mercedes-Benz and that’s a good thing. The gear shifter is on the steering column and being a “Sport” variant of the A250 it sadly did not come with paddle shifters. The interior is all black and with nice contrast red stitching around it. The inlays are draped in carbon fiber look rubberized material, which actually look and feel nice. This all adds up to a subtle yet pronounced sporty look. The seats are supportive and comfortable and more than up to the task for a mix of daily and spirited driving. 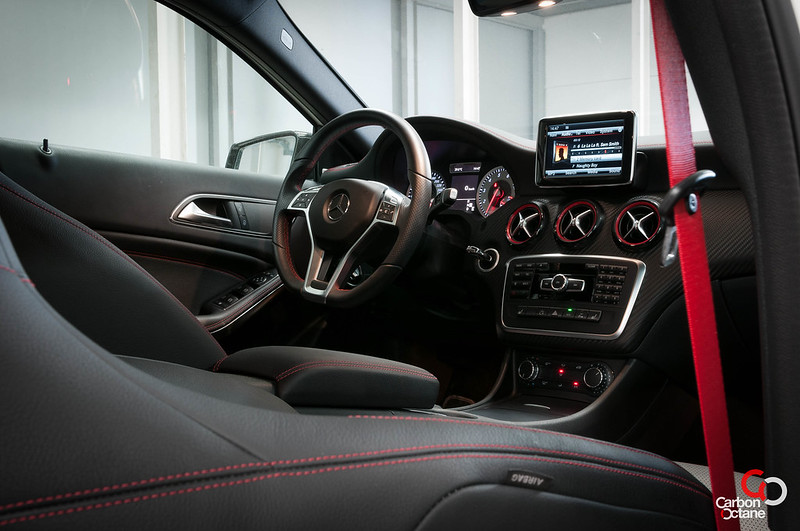 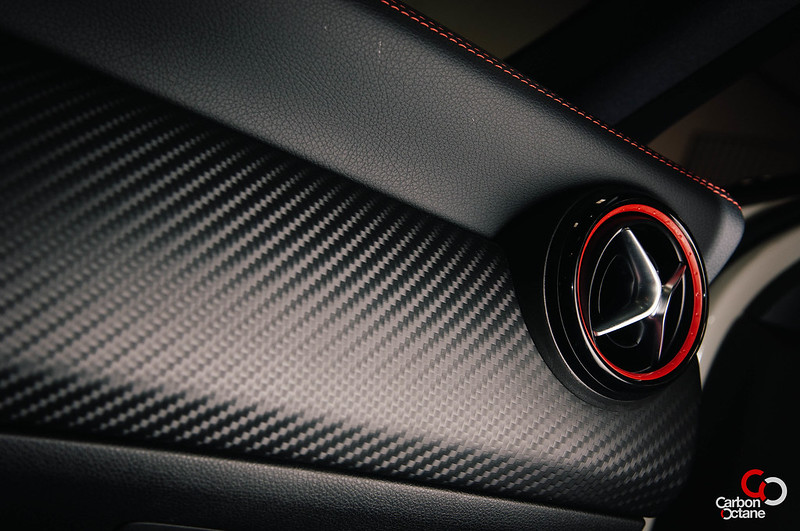 There is a small stretch on windy road around the outskirts of Dubai, which is a good testing ground to get the initial feel of the car. And that’s where we headed along with a friend who brought his VW Golf R Mk6. I knew that the A250 would be low in the power department, but I wanted to know how its front wheel drive system coped up with the terrain. We had a go on the Golf R first and it negotiated the 1.5kms stretch of windy road with precision and brutality. But the A250 surprised us. Where we expected under-steer it did nothing, it just stuck to the line and shot out of each turn. The power delivery was smoother with more initial oomph than the Golf R. That’s a mark for a great daily driver and we do not have to drive it on the upper ranges for the rpm at all times to get the most out of it. 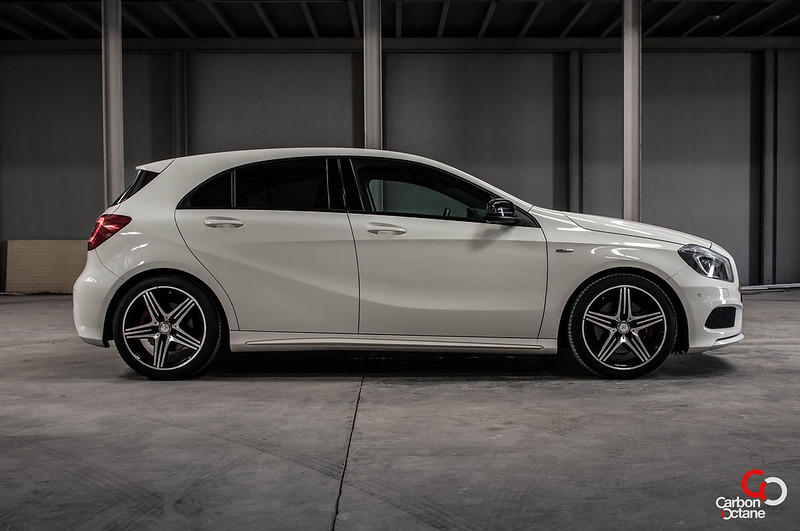 Around the city the A250 had enough low down torque to make the ride comfortable and relaxed. It did not need to hunt down the ratios of the gearbox to find the extra power in overtaking. Sport mode on the A250 also changed the nature of the shift patterns and kept the power available at all times. The ride is not lofty but has a sense of firm-comfort and is actually quite relaxing in any road conditions. It certainly is a daily hot hatch to counter the likes of the Golf GTI but we would need to test it side by side to learn more about it. What the A250 is that it’s the first welcome from Mercedes-Benz. Much like a kids-menu at McDonalds. Same great taste but in a smaller package. And once you are hooked to it you also get hooked to the brand and would want to upgrade to the next level. This is the car that would insert a sense of brand loyalty towards Mercedes-Benz. A small package, which does almost everything you can throw at it, except for carrying large luggages. The boot size is good for daily grocery or even monthly grocery runs but not enough when picking up relatives from the airport, at least not those relatives who always travels heavy and we know who we are talking about. But then again would I ever take my hatch back there, no! It’s good to fit a medium size suitcase and maybe a few bags on the rear seat. But it’s the driving experience that really puts a smile on anyone’s face. 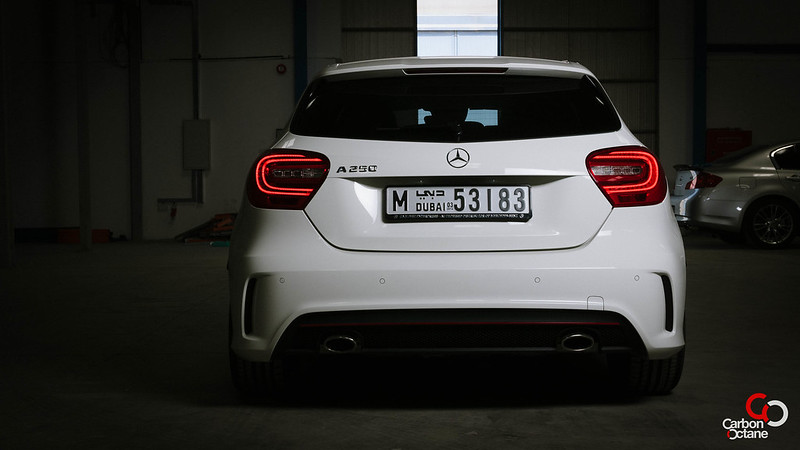 Let’s now head back to the mini monster, the A45 AMG. Since the time of its introduction and the rather superlative performance figures it boasted, we were quite keen on actually experiencing how the 2.0 Liter turbocharged, 4 cylinder engine felt. The horsepower figures are more than a standard Mitsubishi Evolution or its arch rival, the formidable Subaru Impreza STI. These two also feature a full time AWD system. 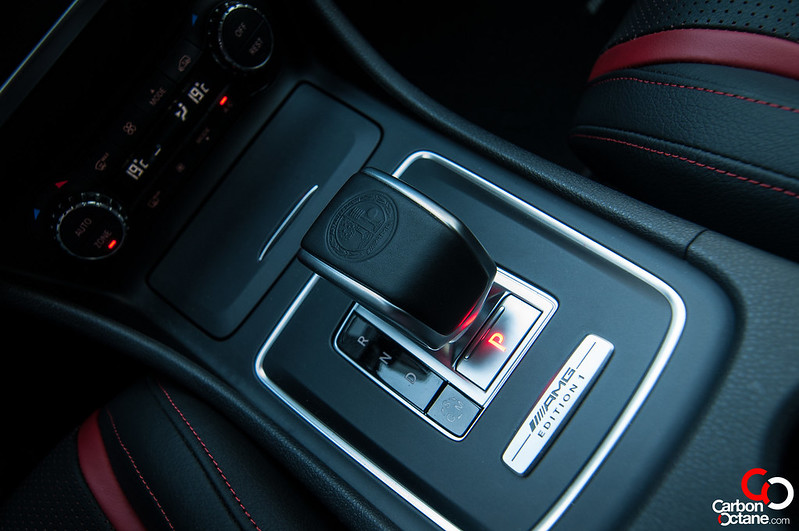 The first thing that one feels while driving the A45 and shifting through the gears is that, this is one hell of a powerful machine. It flies and snorts during upshifts and downshifts. The faster one goes the lighter it feels. The suspension is sprung up harder than the A250 but then again it has to handle the extra horsepower and torque. The engine still sits transverse in the engine bay and the new 4Matic transfers as much as 50% of the torque to the rear wheels. There was no noticeable torque steer as well which is a good thing because it might have provided for a nasty surprise to an un-suspecting driver. Yes it has  150 horses and 100Nm of torque more than the A250, but the characteristics are the same. It does not overwhelm the driver nor the passengers. The only tell tale sign that you are moving faster is the rate at which the speedo climbs. For gods sake, if launched properly, the A45 AMG would hold against the C63 AMG. Now that’s a beast. 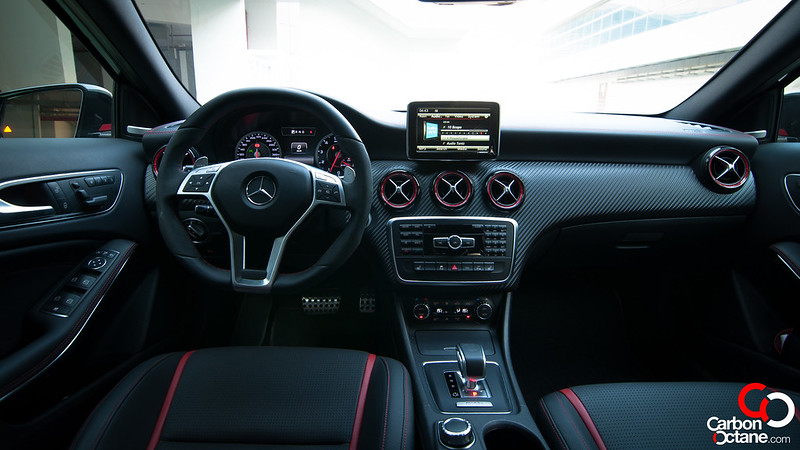 Recaro seats adds to the flare of driving an uber hot hatch, but other than the alcantara lining on the steering and the presence of paddle shifters, the rest of the interior is the same as the A250. The driving experience is better experienced on the manual mode and engaging the paddle shifters. It would be a waste to drive it in automatic. 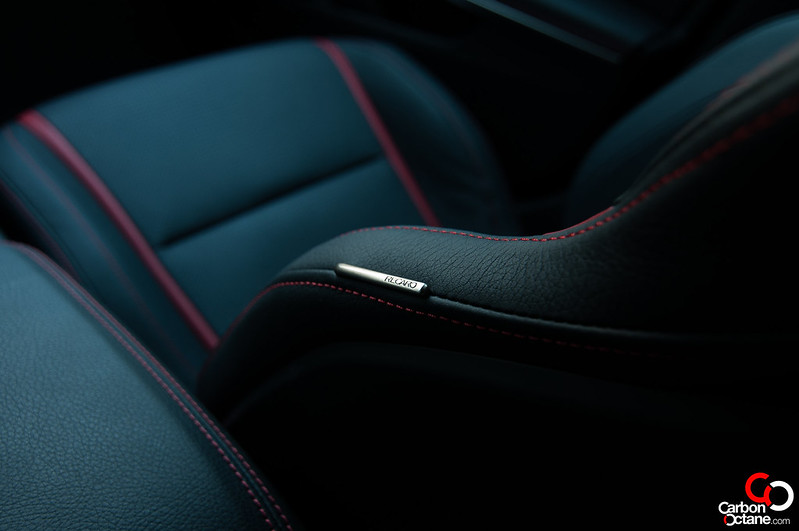 The AMG models have benefitted from their 4Matic system. Now there is a way to utilize the full potential of the AMG models rather than to see it go up in smoke. This is the case with the A45 AMG, no matter how hard you push it, it just goes. Throw in a curve or two, it will take it without breaking a sweat. The suspension seems more than capable to handle another 40hp. It has set a new standard in the hot hatch market, one that would be hard to match, let alone overcome. We would have to wait to see what the new Golf R or even the Golf400 has to offer. All this comes at a price. At quarter of a million dirhams this is the most expensive hatch back we have ever tested. It all comes to individual choice at the end. Both the A250 and the A45 AMG are great hot hatches. The A45 AMG provides the most fun while encouraging its driver to push harder and experience something more special.