Lexus has gone all out with their ‘L-Finesse’ philosophy and their strikingly new spindle grill, reminiscent of the company’s staring business, which had nothing to do with cars. The lines starts at the nose and tapers down to the hull and gaping intakes and louvers feed air to the new engine and brakes. When the first ‘IS’ came out in 1998 it was aimed squarely against the German dominance in the category, namely BMW’s oh so good 3 series. And now on its third generation, Lexus has introduced the ‘F Sport’ variant of the ‘IS’, now called the IS 350 F Sport.

Lexus’s IS 350 F Sport has a healthy dose of competitors other than the 3 series (now called the 4 series), they include the Cadillac ATS, Audi A4 and Infiniti’s new Q50 and so it was natural to step up their game. The cream of the crop is its 3.5L V6 which is mated to a silky sifting 8 speed automatic transmission. The wheelbase is also extended by 3 inches and helps slightly with the rear leg room space. 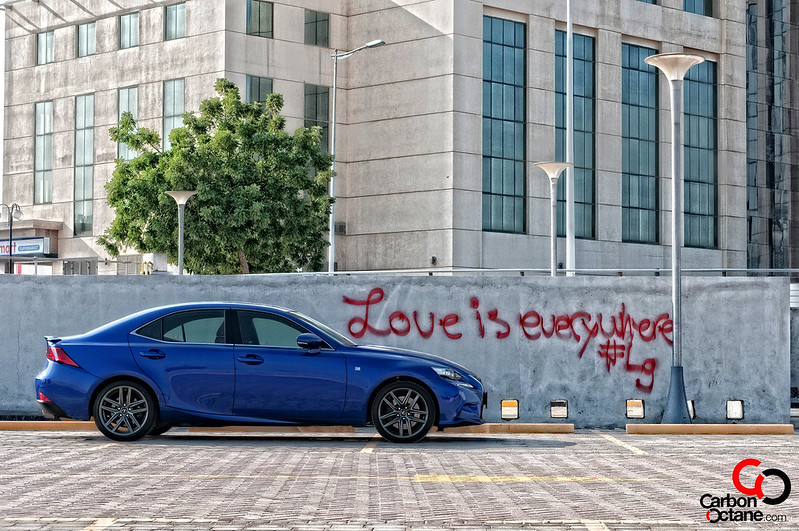 But wait, there’s more to it than crisp lines and wind tunnel tested ducts and an artistic impression of the front fascia dominated by a new grill design which echoes Lexus’s new design direction. The ‘IS’ has borrowed the mechanized and moving tachometer from the LF-A. This, for the time being, has not been incorporated in any other line, making the new ‘IS’ that much more special. It’s touches such as these makes for a strong sales pitch in my opinion. This is from a guy who picked up a 2007 GS430 just because it had white interior lights which disperses soft light on the interior console rather than the V8. 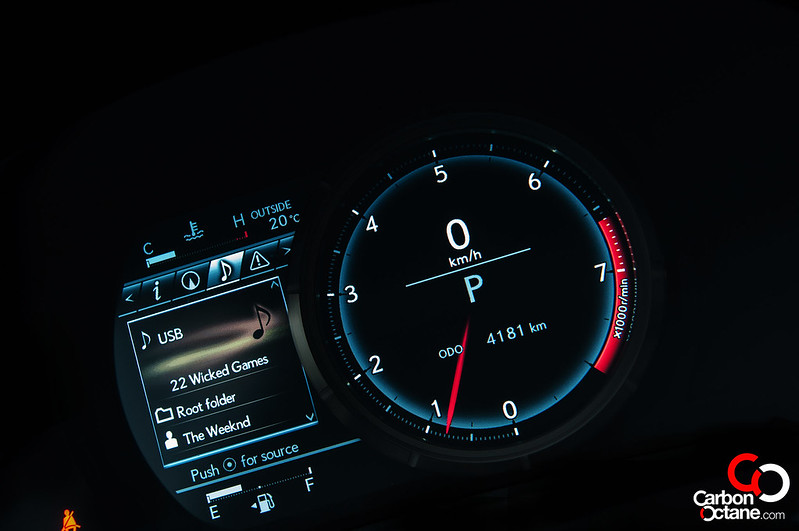 So is it different from the outgoing model which it replaces. Well yes and no. The drive feels more or less the same and it’s not a bad thing. Lexus was never known before for all out performance albeit the IS-F. The new IS 350 IN ‘F Sport’ trim carries and tendency towards more enthusiastic drivers than those who have been used to Lexus’s silky smooth and laid back drive. It’s Lexus’s way of getting younger and spirited customers and having them try out Lexus’s definition of sports and luxury. 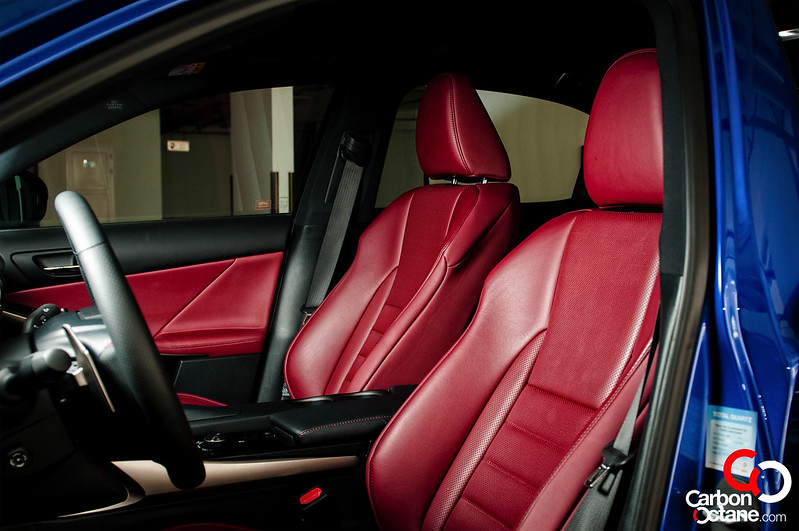 The ‘F Sport’ feels slightly heavier sprung than the non sport editions and has great sporty contoured seats. Our tester came with this almost red interior, it contrasted well against the deep blue metallic exterior color, quite similar to the IS-F which we tested last year and fell in love with. Red contrast stitching against black stands out and hints at a sportier ambience. 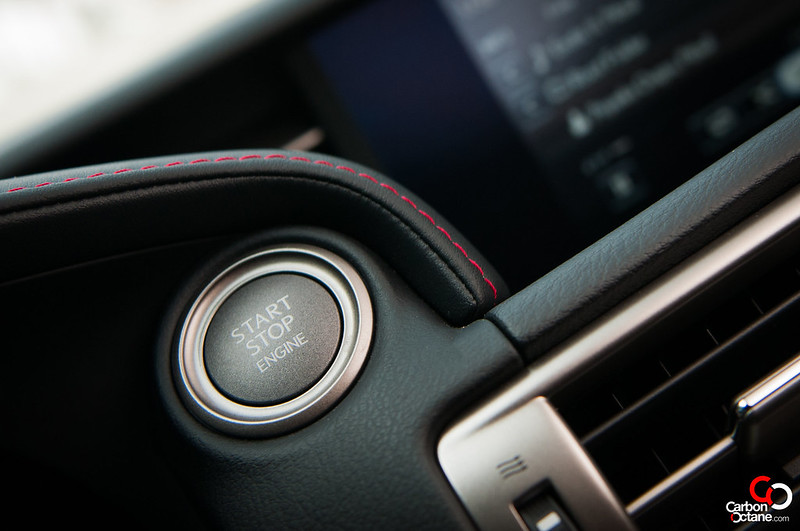 The ‘F Sport’ is heavier than its competition but let’s look beyond that for the moment. The drive is comfortable around town much like the previous generations. But once the ECY is flicked on the Sport+ mode we do get a feel of some spirited motion. 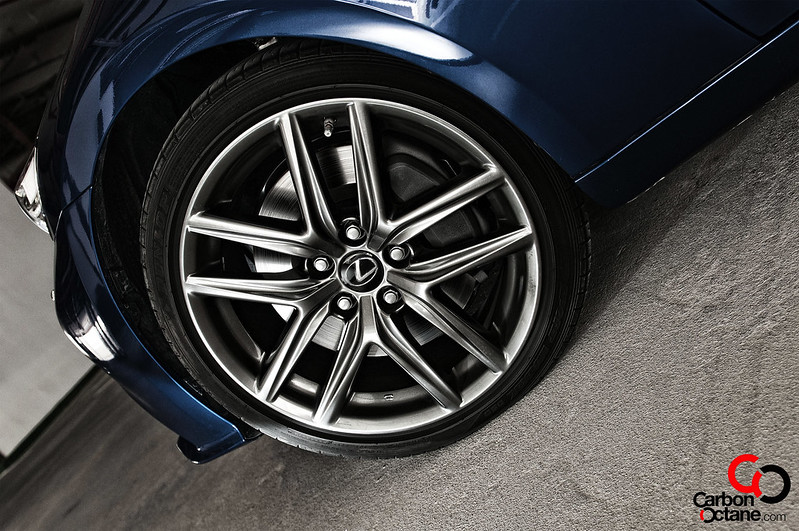 The rear end has tons of grip though we would have applauded if Lexus were to have given some more feel from the steering column. Lexus’s aim was to build a fun to drive car and handling enhancements from the development of the GS F Sport, such as the electronically boosted Variable Gear Ratio System, 20% stiffer suspension and Lexus’s first G-AI (G force Artificial Intelligence), technology that shifts gears based on the variances of g-forces. A lot of tech indeed and we do feel that the sum of its parts have actually contributed to a more engaging drive in the IS 350 F Sport. 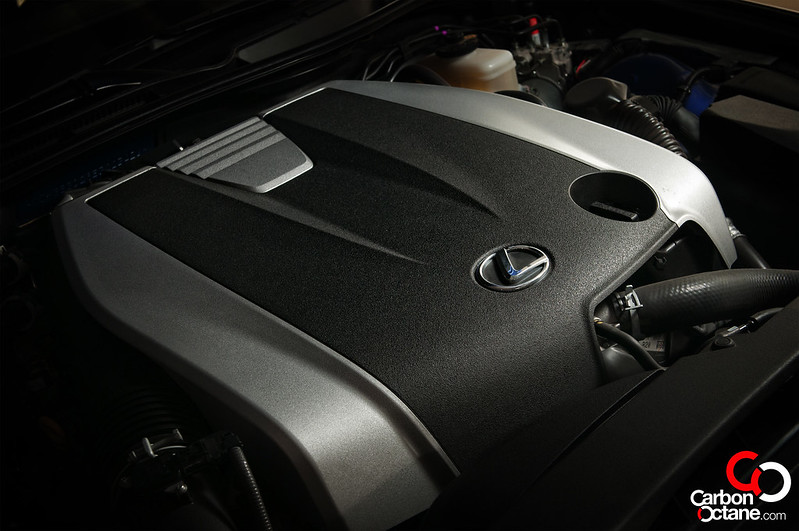 Being overly brutish with the accelerator pedal rewarded us with an almost IS-F like exhaust tone beyond 4,500rpm and once the paddle shifters are used, down shifts becomes fun with its automatic rev matching. Feels like driving a sports car, yes. It would do with more power in my opinion but then again it is a tightly packed package and one that does not disappoint. The other is the awesome sound system. Lexus has benefitted greatly with its association with Marc Levinson. The bass is tight and the frequencies are tuned. We have heard B&O’s and Harman’s along the way, but Marc is in a different league. 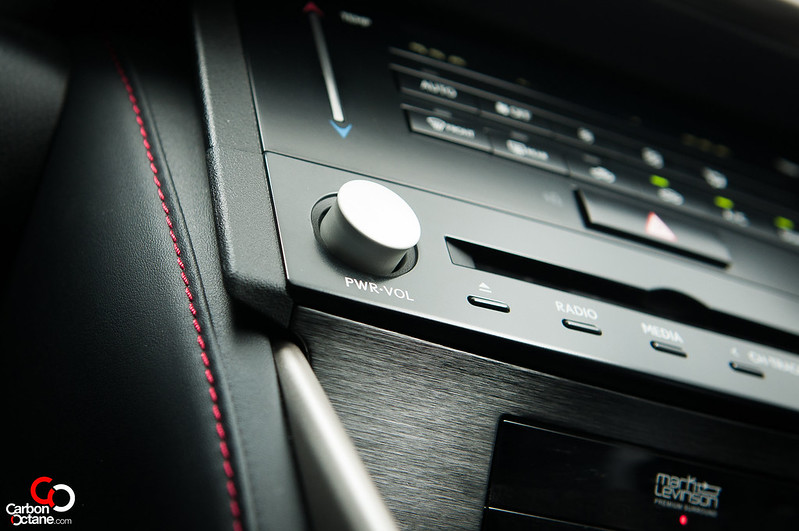 The new IS 350 F Sport is a pleasant take on the already good IS’s. It offers a sportier demeanor for those who have shied away from the Lexus brand before. They won’t be disappointed. There are few manufacturers which can compete against its build and reliability. And now it comes with looks and more spirit than before.