There is much to be celebrated about the Jaguar range these days and their regional office knows that. They have been entertaining journalists on the track whenever a new launch is announced. Such was the case with the XFR-S. My week literally started with testing the XFR-S at the Yas Marina Circuit and then taking the XFR-S on a stroll around town over the weekend. Life fulfilled, not quite, but definitely one of the best adrenalin rush filled week I have had in years.

The Jaguar XFR-S is a very British take on the German holy trinity, namely the BMW M5, Audi RS7 and the Mercedes-Benz E63 AMG. There’s something more vicious and rawness to the British interpretation over the very clinical German trio. We had loved the XFR and its 500+hp and mammoth torque that was guaranteed to bring in butterflies in the stomach, but that all changed when we started receiving press releases on the new XFR-S. Really, do we need more power than the XFR? I guess the folks at England thought so and bless their minds for thinking so. Power is not everything but it certainly makes one’s life more enjoyable to live. 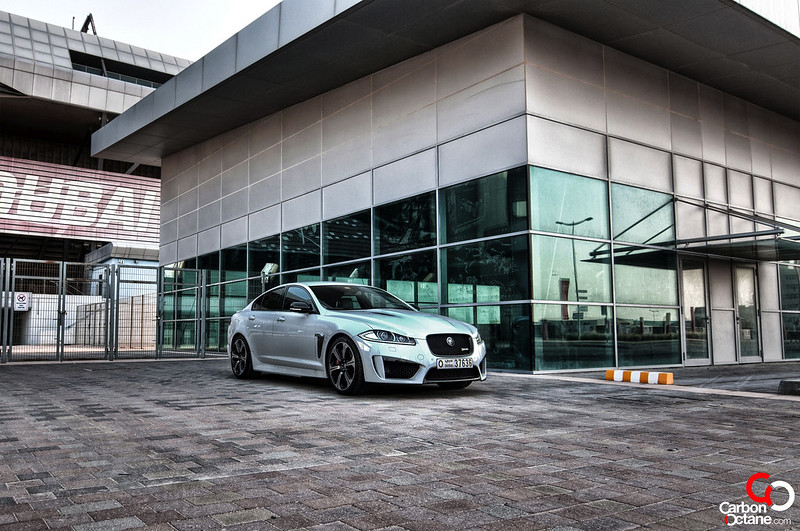 The XFR-S carries a revised engine management system which is good for almost 10% hike in horses and twist and brings down the sprint to 100kmph by 0.3 seconds to 4.6 seconds from the already potent XFR. The terminal velocity is set at 300kmph, supercar territory indeed!! The front and rear dampers are stiffer by 40% over the XFR and almost 100% over the XF but it does not make the ride bone jarring hard. It’s firm yet comfortable and now much more composed during hard directional changes and under hard braking. Twenty-inch shoes are half an inch wider up front and an inch wider at the rear, rightfully so given the power bump over the XFR. The revised front and rear fascias help lower the lift by as much as 68% over the XFR. All in all it’s looking like a heavy weight in paper but soon we shall talk about how it feels on the road. 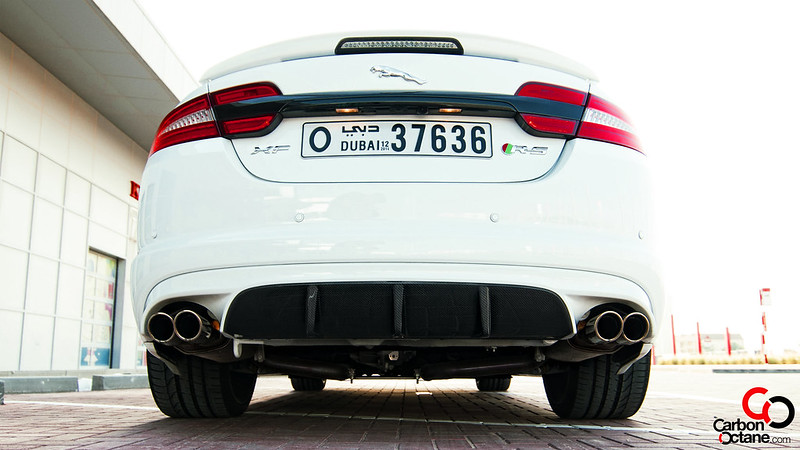 The interior is the same as that in the XFR. There is leather everywhere and what’s not covered in leather is dresses in carbon-fiber. The seat side bolsters are draped in carbon-fiber fabric, very reminiscent of the XKR-S. 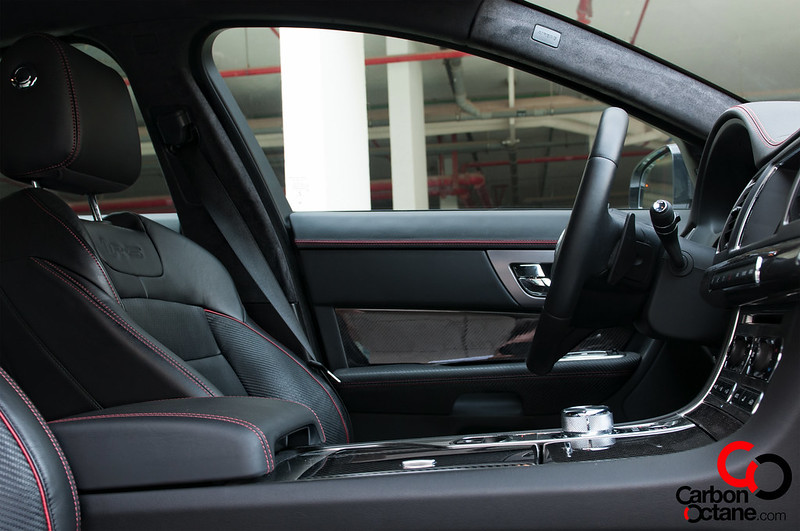 Let us talk about the dynamic feel of the XFR-S. At the track with the transmission set on sport and ecu on race mode (dynamic) the full 550hp is unleashed. The exhaust sounds throaty and is an aural delight especially while below the tunnel. And as soon as we merge into the track and let it loose, it does just that. The 550 British bred racing horses take charge and thrust us into the seats. From then it’s a matter of using the pedal shifter and shifting as the tacho revs fast towards the red line of each gear. 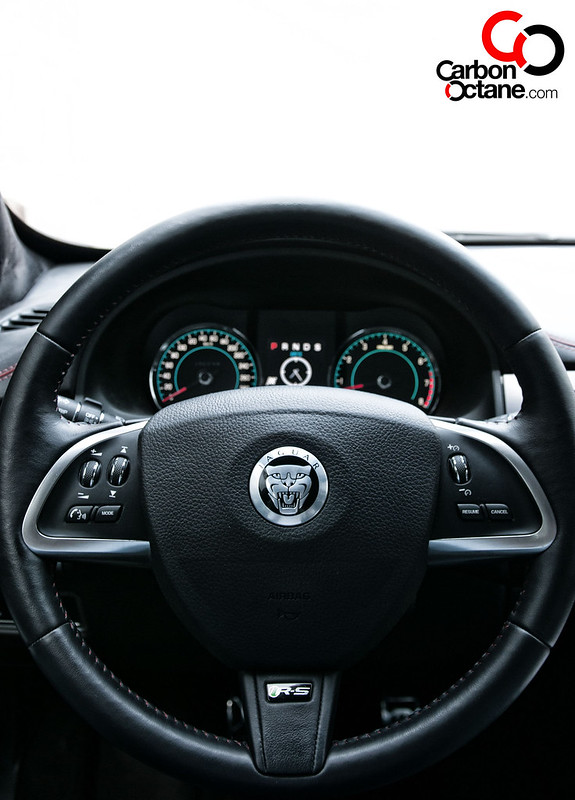 My 20 minutes track time in the XFR-s was spent pursuing the tail end of the rather fabulous F-Type V8S and while we maintained the same gap in the straights, I was having a hard time in the braking and in the turns. 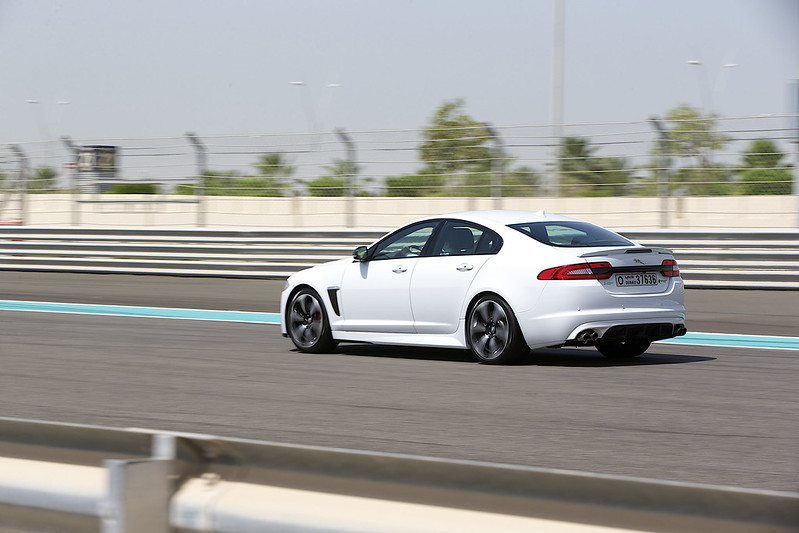 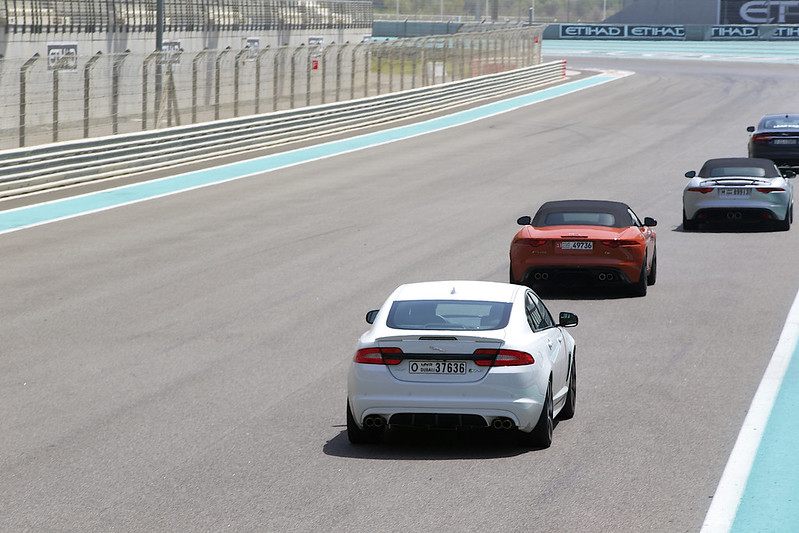 That’s mainly due to the fact that I was spending more time burning rubber around the bends and coming out of it rather than going for the clean lines. Well that’s what the XFR-S is all about, it’s about hooliganism in its purest form. The F-Type benefits from a new chassis engineering and more updated technical advancements but in terms of driving fun, it would be hard pressed to beat the XFR-S around the track. But I so wished for the XFR-S to have the same sound track of the F-Type, that old school spit fire pops is music to our ears. 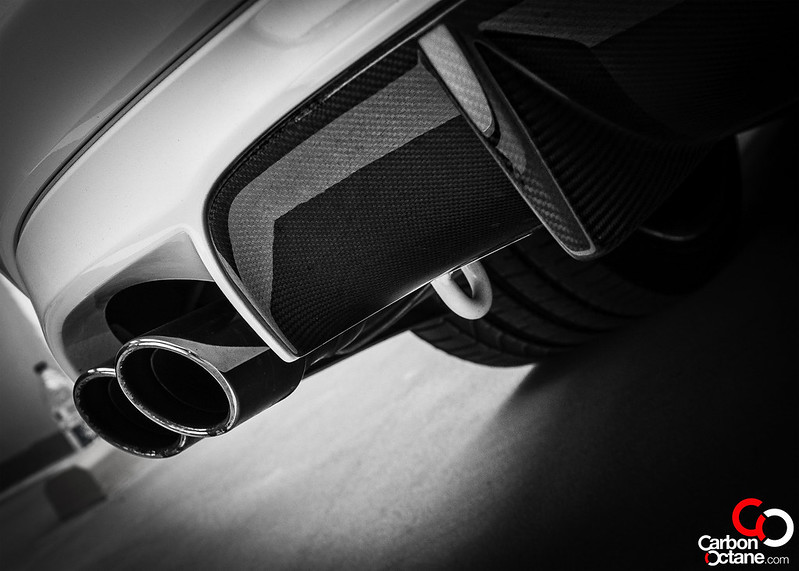 The first few laps were good with the XFR-S and the brakes were progressive and biting, the tires gripped and the rear sidelines just enough for us to point towards the apex and sling shot out of it. But as each lap passed the brakes started cooking and we had to brake earlier and had to be easy with the gas pedal around the chicanes and those tight bends. But the whole experience left us with sweaty palms and sore cheek muscles from sporting a constant ear to ear grin, the full time we were at the track. 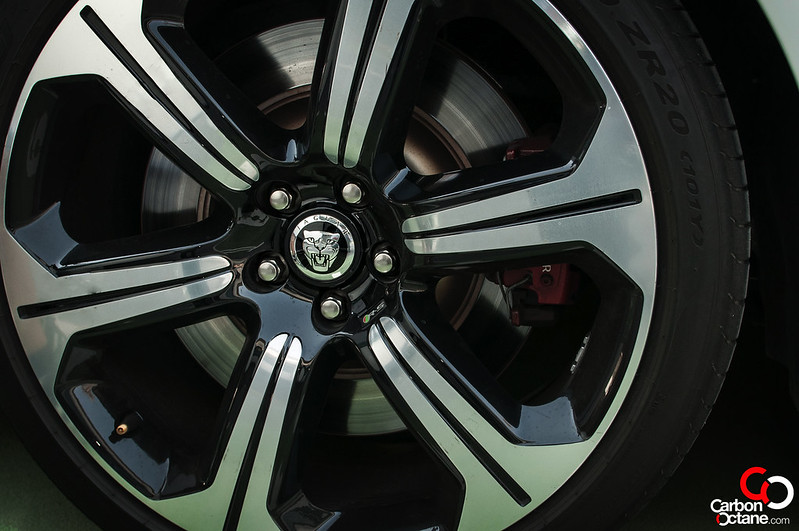 On the road the XFR-S felt much the same as the XFR, though stiffer. Compared to the M6 Gran Coupe and the RS7 which we tested a few months back, the experience on the XFR-S was much more intimate thanks to its hydraulically boosted power steering. Yes, there was feel from the road for a change.  I know exactly what the front end of the car was doing whether it was at the track or hitting the interchanges around the main highway. This lacked in the German trio.

The XFR-S is probably the last grand statement from the XF fraternity. Unless we hear from them soon on a certain new XFR-S GT. More power is never enough but what the XFR-S has is old school feel which gives the driver a sense of control and this is unique. At AED 469k, the XFR-S 70 grand more than the XFR. It’s a lot of money when you look at it next to each other and try and figure out the visual changes. But it’s the sum of its parts, and the XFR-S is well worth the money and its almost individual stand in the growing and sport car arena. 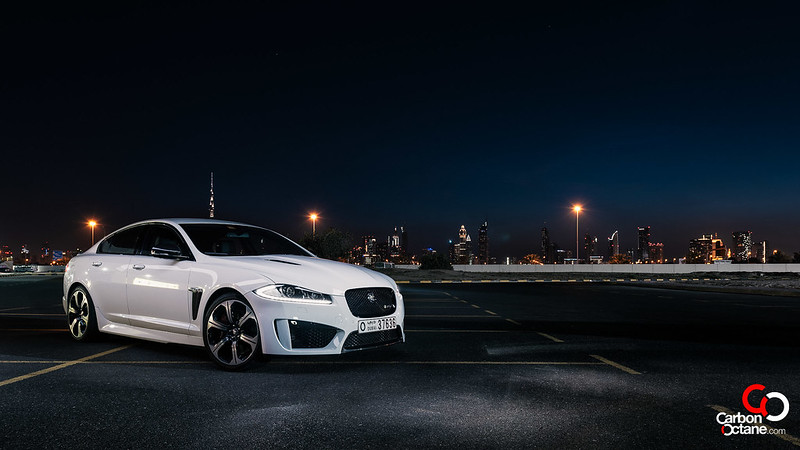 except for the two which were taken at Yas Marina Circuit